Mrs. Joyce Solomon, area director of BCM Tamil Nadu, was walking down the street after having finished a school-time Bible class, when sudden a female police constable approached and grabbed her by the hand. Mrs. Solomon was taken aback, since she’d done nothing wrong that could have drawn police attention.

But the police constable was smiling as she asked, “Don’t you recognize me? My family was not Christian, but I attended a girl’s school where you taught a Bible class.”

The police constable went on to share that through the Bible class she and her entire family had accepted Christ as Saviour. The young woman’s story is one of countless throughout Tamil Nadu, a province in southeast India with a population of more than seventy million, where Mrs. Solomon heads up a team of fifty BCM missionaries who reach over 100,000 children each year in Bible clubs and school release classes.

BCM India children’s ministry was founded in 1973 by Mrs. Christina Lal, BCM’s first missionary in India (Disappointment Becomes God’s Appointment, BCM World, Fall, 2011). As other missionaries were commissioned, Bible Clubs spread to many other places, including Hyderabad-Secunderabad, a twin city municipality of more than seven million where BCM India headquarters is located. Ministry in Tamil Nadu began in 1974 under leadership of Lawrence and Seeli Devadasan (see Still I Will Follow, BCM World, Fall, 2011). BCM India camping ministry began in 1977 in Bangalore under leadership of J. P. Jesudoss.

Today, BCM India children’s ministry is carried out through a three-pronged program of Christian education, church development, and socio-economic development. 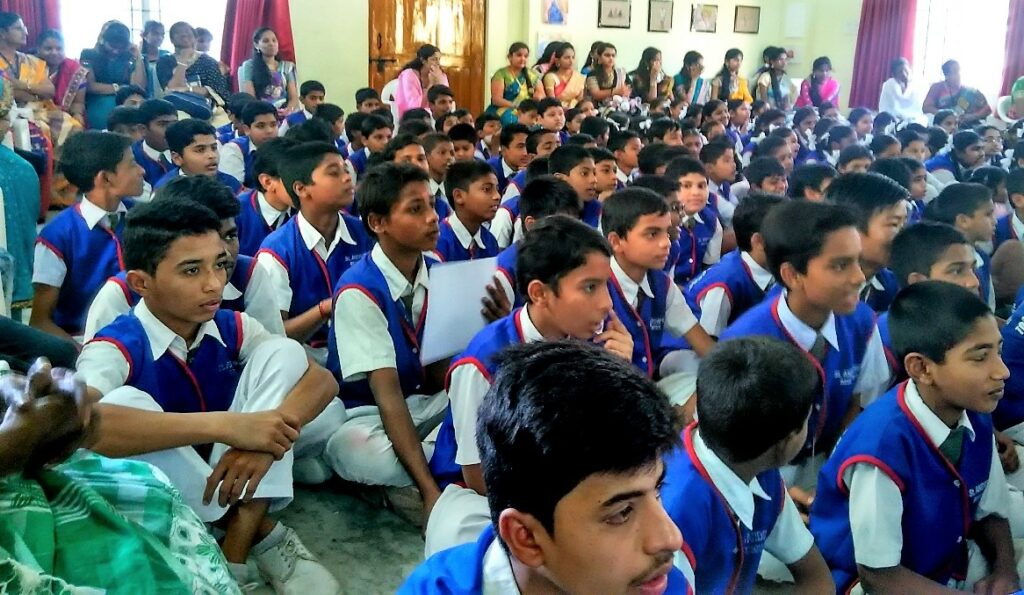 BCM India children’s ministry began with just four missionaries in the 1970s, but has grown today to sixty full-time missionaries and hundreds of volunteers reaching than 170,000 children annually through 656 weekly Bible clubs and other outreaches. These include children and youth meetings, rallies and retreats, as well as camps for children and youth.

In Tamil Nadu, which has a sizeable Christian population, BCM missionaries have been invited to conduct Bible clubs in many schools as well as to teach special classes on the Bible along with spiritual, moral and ethical values. As of 2017, BCM missionaries are conducting Bible clubs in 286 schools across Tamil Nadu state. Through their witness, countless children have experienced for the first time the love of Jesus Christ, resulting in transformed lives.

One such example is three teenage boys from Kasimedu, a fisherman community right on the Bay of Bengal. They attended weekly Bible classes in their secondary school. But the three of them together were constantly disrupting the class, playing mischievous pranks like throwing balled-up paper or teasing the girls. Troubled, the BCM missionary who taught the class committed to praying intentionally for these three boys.

Once the three finished school, the BCM missionary didn’t see them again for some years. She was recently back in the area, teaching at another school, when three young men approached to introduce themselves. She immediately recognized the three troublemakers. They had sought her out expressly to apologize for all the trouble they’d caused and to thank her for how BCM children’s ministry had changed their lives. All three were now in Bible school, studying for ministry. 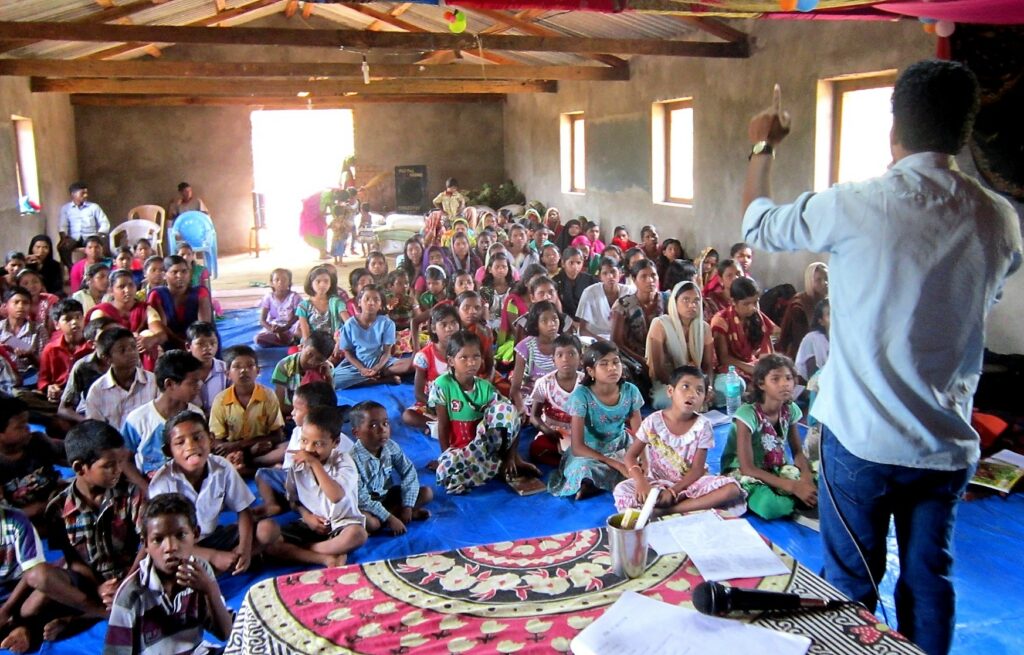 BCM churches and missionaries also hold summer Vacation Bible School programs in many provinces across India. The VBS programs run from 5-10 days and include Bible stories, songs, games, competitions, and other activities. The longer time investment of VBS provides a wonderful opportunity to nurture children spiritually and inculcate Christian values. Every year sees thousands of children dedicating their lives to Christ through VBS programs.

An added blessing is witnessing a new generation of Christian leadership who were themselves introduced to Jesus Christ through BCM India children’s ministry. Mrs. Joyce Solomon recently participated in a VBS teacher training program. A local pastor had come in to give the morning devotional to the trainees. He approached Mrs. Solomon to introduce himself. As a small boy, he’d been part of a group of children from mostly poor vendor and day labourer families who’d attended one of Mrs. Solomon’s Bible classes. Through that class, he’d accepted Christ as Saviour. Not only had he grown up to be a pastor, but in time his entire family had also come to Jesus Christ. 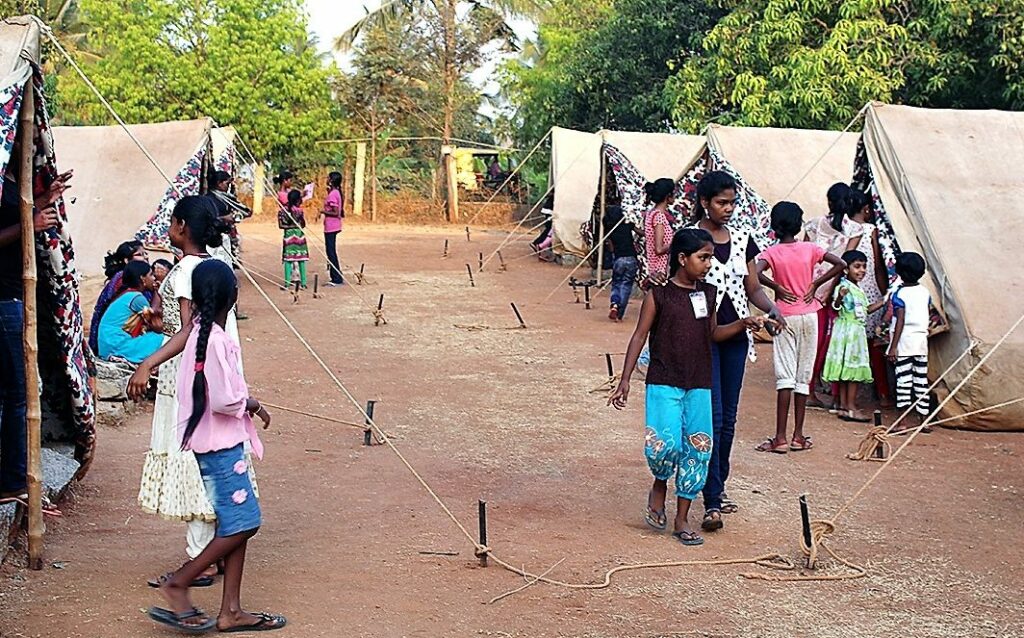 While BCM churches hold various camps and youth retreats in different regions of India, BCM India maintains a permanent Christian camp and retreat facility in the state of Bangalore. Children’s and youth camps are held there each summer, while winter camps are hosted at Kolar Gold Fields (KGF), another Christian retreat center some 130 kilometers from Bangalore. BCM India area director Mr. B. V. Mani heads up the camping ministry along six other BCM missionaries, who also work in Bible clubs and other children’s ministries throughout the year.

Around three hundred children and seventy youth from various denominations and independent churches attend each camp, ably supported by thirty-plus leaders and volunteers. 2017 celebrates forty years of BCM camps in Bangalore. Along with countless children who have come to Christ, among the exciting fruits of this ministry are the many adults now serving in camp and children’s ministry who came to Christ themselves while attending camp as children.

One camper, Eunice, shares: “This was the second chance I got to attend the BCM Camp. I learned many things, like when we ask God for what is good for us, God will definitely give us what we ask. There were many quiz competitions, which were very interesting, and I learned many memory verses. After camp was over, I learned fifty more memory verses, and it has become my hobby. I wish there was BCM camp twice a year!”

Sabrina, a camp teacher shares her own experience: “I was given twelve children to teach them the Word of God. I am happy that all the children believed in Jesus [during camp] and learned more about God. I felt the presence of God each and every second of the day.” 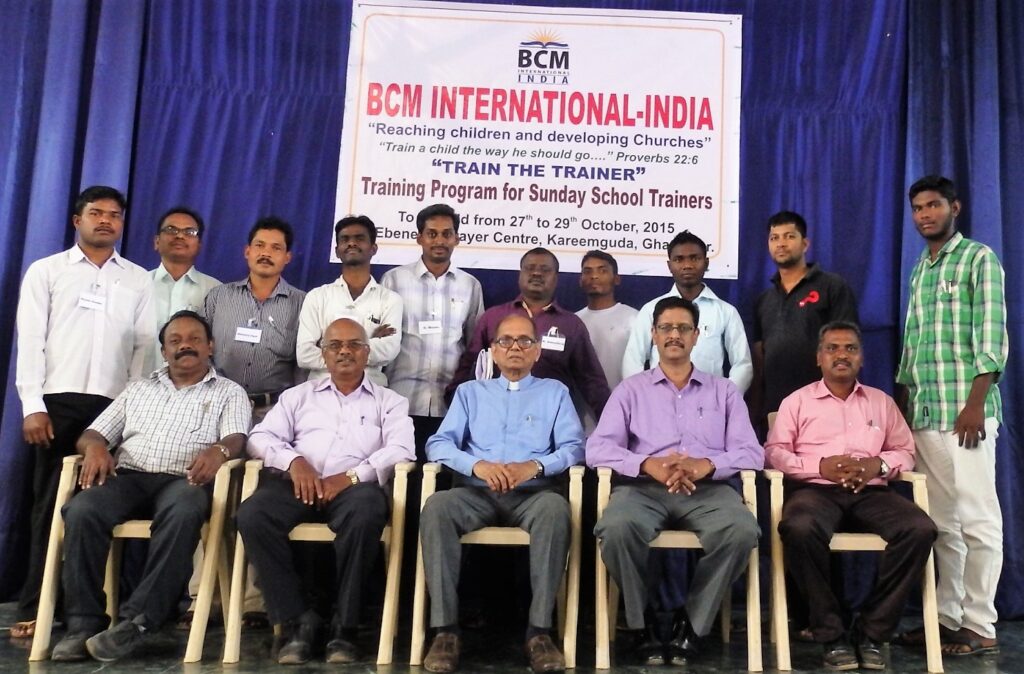 With over 1.2 billion residents, including more than 450 million under the age of 18, BCM missionaries cannot begin to reach every child across India with the gospel of Jesus Christ. Which is why church development is an important element of BCM India children’s ministry. This includes In Step with the Master Teacher (ISMT) training programs for children’s ministry leaders. A key aspect of this is Train The Trainer (TTT), which trains key regional leaders to teach ISMT within the local churches.

Two BCM missionaries, B.V. Mani and Yesuraj Manuel, have qualified as Lead Teachers to conduct TTT training. They in turn have now trained twelve other pastors and missionaries as TTT trainers. These have already trained 245 children’s ministry leaders in various regions of India with more training events already scheduled. The ultimate objective is to multiply well-prepared Sunday school teachers and children’s ministry leaders throughout BCM churches across India as well as other denominations that have asked for training. 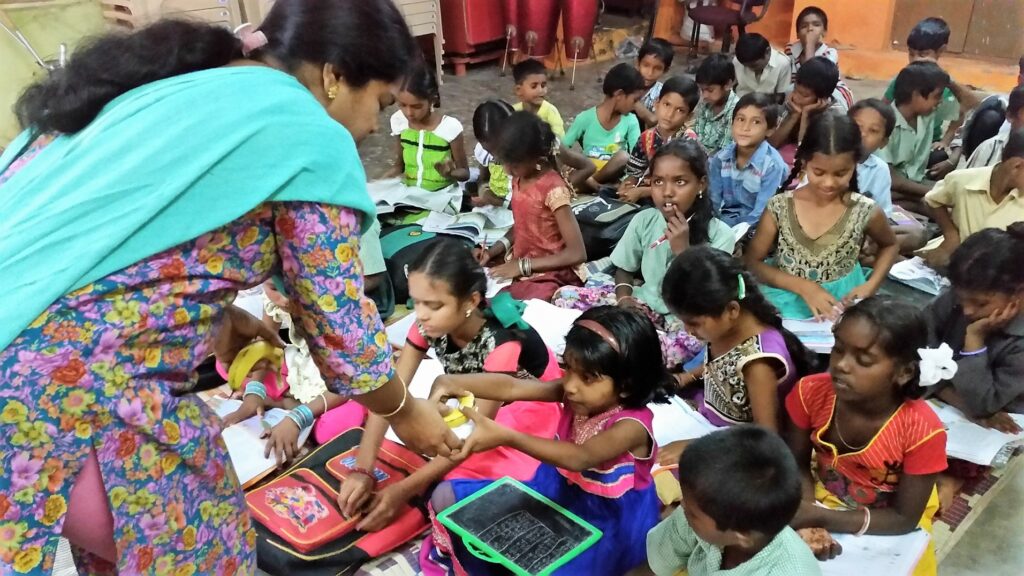 With a majority of India’s 450+ million children under the global poverty level, BCM India seeks to meet physical as well as spiritual needs. One such outreach is the Evening Study Program, held in four different areas of the Hyderabad-Secunderabad twin city municipality. Under the program, children spend two hours in the evening at study centers, where they receive help with their studies, school supplies, a nutritious snack, along with spiritual and moral nurturing. Many of these children also participate in local BCM VBS and other children’s programs during Christmas and summer vacations.

“Scripture tells us to train up a child in the way he should go, and when he is old he will not turn from it (Proverbs 22:6),” BCM India executive director Paul Padmakar sums up. “BCM India is striving its best to reach more and more children with the Gospel of Jesus Christ that they may surrender their lives to God, grow in the knowledge of God, and also become a witness to others of our Lord and Saviour Jesus Christ.”