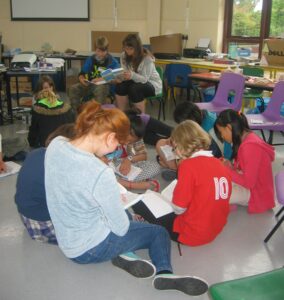 What do sheep, cheese, fresh air and kids have in common?  BCM-UK’s Barton Camp! Located not far from the town of Cheddar in the rolling hills of Somerset County, Barton is only a short drive from England’s southwest coast across the bay from Cardiff, Wales.  Surrounded by stunning scenery and bucolic images of grazing cattle and sheep, the camp offers an ideal place to help children KNOW, LOVE, and OBEY God without the daily distractions of a hectic life.

BCM International’s UK branch began as a Bible teaching ministry in 1947.  BCM-UK has been running youth camps throughout the United Kingdom since the early 1950s. Other ministries include Bible Clubs in schools, churches and community centers as well as running school worship/assemblies and Bible Explorer programs during or after school.  Training seminars for church volunteers cover BCM’s core children’s ministry training curriculum In Step with the Master Teacher (ISMT), the evangelistic course Sharing Christ with Kids and puppet workshops. BCM-UK personnel serve in England, Scotland, and Northern Ireland.

This year, BCM-UK held two camps at the Barton facility.  The first camp, Get Real!, was held from August 8-14, 2014, for ages eleven through fourteen years old.  JaM camp (Jesus and Me) immediately followed from August 15-22 for ages eight through eleven.  BCM missionary and camp director Angeline White explains, “For several years prior to this summer, England had just run a junior camp for the younger age group. But with the help of volunteers from BCM’s Scotland and Ireland camps, we were able to start our new camp—Get Real!—for the older kids.  For our first year, we had 17 campers in the older age group, half of whom don’t regularly go to church.  Several of these had come to camp as children. It was encouraging to see their excitement when they found out there was now a camp for their age.”

Not only does Get Real! provide an opportunity for continued input in the lives of campers as they grow from children to teenagers, it is an excellent means of discipling and mentoring youth for leadership roles. Hopefully, some of these teens will grow to be future camp staff. Camp director Angeline White explains further: 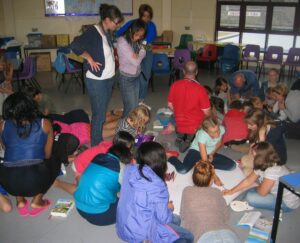 What do you know about Jesus

“The idea behind camp is for children to experience a fun week in a loving Christian family environment where they can spend time in God’s Word, discovering more about Jesus—beginning or growing further in a life of faith in Jesus.  For children we usually see only at weekly Bible clubs, camp is a great opportunity to build good relationships and to see God’s love in action through staff and other children who already follow Jesus.” One good example of this was a JaM camper who shared how he struggled at school because he was the only one in his class who believed in Jesus. Immediately his group of campers and leaders stopped to pray for him.

For older campers, witnessing staff coming together from across England, Scotland and Ireland to minister to them really touched their hearts. For the JaM camp, BCM USA missionary Jane King joined UK staff as Bible teacher and camp missionary, sharing recent ministry trips to Nigeria with the campers. She also helped with crafts, pool games and free time. Jane shares, “It was exciting to see campers become so engaged in the Bible Time lesson they forgot to chime in with their own assigned role of sound effects.”

On the first night of camp, the children were invited to fill out large posters with anything and everything they knew about Jesus.  Some of their responses were both creative and humorous:  “Jesus made lots of decisions.”  “He created my Mum.”  “He could pray a lot.”  “He was baptized with a booming voice.”  “He didn’t make looms.”  (In case you’re wondering, that’s the new craft craze of making bracelets with small colored rubber bands.)

Other campers posed thought-provoking comments:  “He stood up for what he believed in.”  “Jesus got trapped in a cave after he was on the cross, then he pushed a rock and got out.”  “He has a mother and two fathers—God and Joseph.”  “He’s a celebrity.”  “42” (A reference to The Hitchhiker’s Guide to the Universe, where 42 is the meaning of life, the universe and everything.) 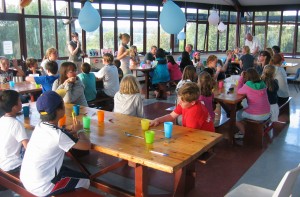 And, as always, children can be candid as well as encouraging:  “Jesus is amazing!”  “He’s your friend.”  “He tells the truth.”  “Jesus loves everyone, no matter if you are ugly or short or . . . Jesus loves everybody!”  “Jesus helps us to wash away our sin.”  “He died so we could live.”

Yes, yes He did!  “From the lips of children and infants you have ordained praise…” (Psalm 8:2 NIV)

At the end of camp, many children were reluctant to leave. Some were even in tears.  Relationships forged and spiritual growth were evident. Campers were asked, “What would you tell others about camp?”  Blake immediately volunteered, “It’s GREAT!  Amazing!  There’s lots of fun things to do!”  Tilum quickly added, “I think it’s a good thing to learn about God.”  Tom was especially impressed with the volunteer staff.  “Leaders are paying to come and quit their jobs for a week to come look after us.  That’s amazing!  They really want us to learn about God!”

Camp director Angeline shares about a card she received after camp from a sister and brother and their mother: “The girl thanked me for making it possible for her to go on ‘such an amazing, AWESOME camp!’. The boy thanked me for teaching them about the Bible (he saved his money at camp so he could buy a Bible on the last day). Mum thanked me for showing kindness, support and care and for praying for them.”

Camp staff expressed their own thoughts about camp and its impact.  “The leaders and campers were great, and God used the week for His glory,” reflects Peter Thompson, a staff volunteer at Get Real!  Tom and Christine Morrow, JaM Camp leaders, add, “Best camp we have been on!” Another camp volunteer, Esther Bull, shared the following in a longer article for BCM-UK’s Link Up magazine: 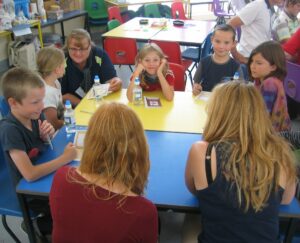 “One of my most enjoyable weeks this summer was spent on JaM (Jesus and Me) Camp at Barton, Somerset.  Don’t get me wrong; for a quiet introvert like me, spending a busy week with 31 children and about 20 adults is an exhausting experience! It is also very rewarding.  This year was my fourth at camp and I think it was the best yet. . . It was such a privilege to be able to share the good news of God’s love and Jesus’ perfect, voluntary sacrifice with these young people. . . Free time was quickly filled with crafts, games, sports, and zooming along on the camp’s new zip-wire and everyone enjoyed splashing in the swimming pool.  My kids can’t wait to go back again next year”.

As in many countries around the world, the UK faces the challenge to effectively train up the next generation in the truth of God’s word. And not just the children who attend church, but many more who are growing up without any knowledge of Jesus Christ.  Right now, BCM-UK has numerous opportunities to run Bible clubs in schools and for churches to run Bible clubs that reach out to their community. But many of these needs are not met due to lack of volunteers, heavy workloads or busy schedules.  A current need for BCM-UK is many more full-time workers.  Please pray with the BCM-UK missionaries and volunteer teams: “The harvest is plentiful but the workers are few.  Ask the Lord of the harvest, therefore, to send out workers into his harvest field.”  (Matthew 9:30 NIV)