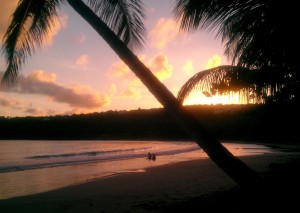 Grenada (BCM World)— Where can a BCM missionary enjoy warm tropical breezes, miles of sugar fine white sand and nutmeg, along with the privilege of sharing God’s word and serving God’s people? Try the spice isle of Grenada.

Southernmost in a chain of volcanic islands off the coast of Venezuela, Grenada has a history complemented by a vibrant fusion of African and European cultures. The small nation is best known for being a major source of nutmeg, mace, cloves, cinnamon and cocoa as well as a popular destination for cruise ships and beach enthusiasts. Even more pleasurable than its scented breezes is the rich hospitality of its 110,000+ residents.

So, how did Bible Centered Ministries come to Grenada? In March of 2010, BCM missionary Dick McCloy was representing BCM at a Columbia International University missions conference in Columbia, South Carolina. There he met John Lewis, a CIU graduate who had recently moved to Grenada with his wife Denise to establish a Bible School called Grenada Institute of Theological Education. John shared an urgent need he’d become aware of as he worked with the Grenada churches: “We are losing our children in Grenada. We desperately need your help.” 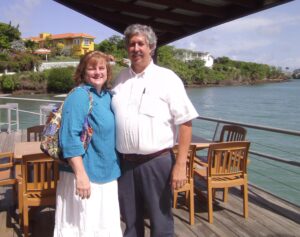 Stephen and Jane King in Grenada

In their first week, the Kings trained more than fifty students using In Step with the Master Teacher. The following week, many of those students returned for the next level of instruction, Train The Trainer (TTT), which prepares leaders in using ISMT to train others, a multiplication ministry model that is key to preparing enough leadership to reach this planet’s more than 2.2 billion children.

That first trip in July, 2010, formed the beginning of what has become a dynamic partnership between BCM and the Grenada Institute of Theological Education. The next month following that first training course, GITE sent a dozen students to another island nation, St. Vincent, where they in turn trained other children’s ministry workers. In addition, many students carried the ISMT training back to their own home churches. Another BCM missionary, Dr. Homer Heater, also traveled to Grenada to work with GITE as guest lecturer and Bible teacher.

Then in 2011, John Lewis was asked by Grenada’s Minister of Education to implement a values education curriculum for the entire country. Through BCM’s participation in Global Children’s Forum, the Kings were able to connect John with Character Solutions, a biblically based program, that has now been implemented in Grenada’s public schools.

In February, 2012, the Kings returned to Grenada. A new GITE training center had been established in Grenville on the eastern coast of the island. There the Kings introduced many new students to In Step With the Master Teacher as well as Train The Trainer. In addition, the Kings traveled to the neighboring island of Carriacou (part of the nation of Grenada) to teach the ISMT course.

Carriacou covers approximately thirteen square miles, with a population of about 7,000. If asked about their faith, the majority would consider themselves Christian because they attend either the Anglican or Catholic church once or twice a year. According to local pastors, attendance at the small island’s evangelical churches numbers less than two hundred. Church leadership expressed what a great encouragement they found BCM’s willingness to come there.

The first training in Carriacou was attended by twenty students. By the end of the course, they were discussing excitedly how they could plan to reach the children of Carriacou. A final course question asked: “After exploring God’s word and receiving training on how to share the Gospel with children and disciple them more effectively, what would keep you from reaching the children through the schools and outreach programs in your churches?” 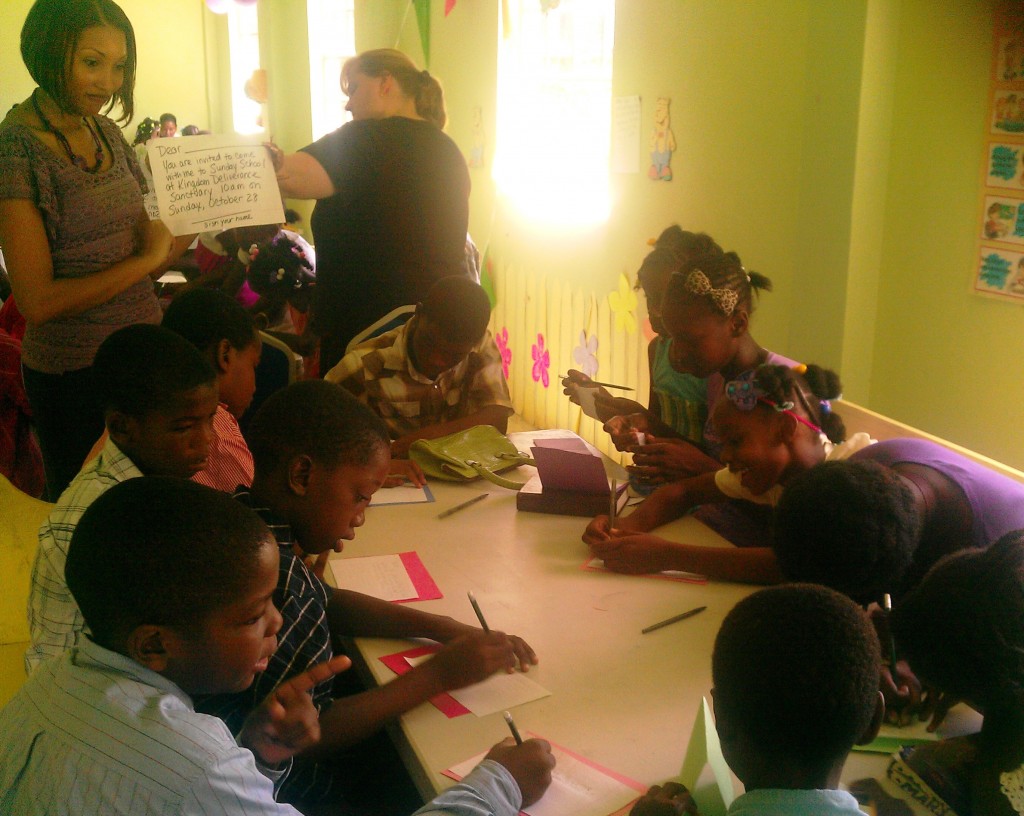 One church shared that their entire children’s program only had an average of eight students, and that they were not currently implementing any of the methodologies taught during the training. They committed to putting into practice what they’d learned and set a goal of reaching fifty children in the neighborhood. Eight months later, the Kings returned to Grenada and Carriacou to follow up and encourage students and churches that had already received training and to continue expanding the ministry. One Sunday the Kings were visiting the church that had complained of its tiny children’s program when they were asked to take over the children’s Sunday school time. What a surprise to see more than fifty children in attendance! That church is now planning to expand their outreach in the community and has set a new goal of reaching a hundred children.

During this trip, while on Carriacou, Stephen and Jane took a boat ride to the neighboring island of Petite Martinique to visit a new church plant with roughly thirty new believers. Stephen preached, and Jane and Steve taught an all-day ISMT seminar with twenty-five adults in attendance. The group had planned to go to the beach after the seminar to hold a baptism service. Unfortunately, due to intense local hostility and concerns for repercussions of discrimination and economic harassment, the baptism was cancelled. These new believers would deeply appreciate prayer that they would remain firm in boldly sharing their faith. 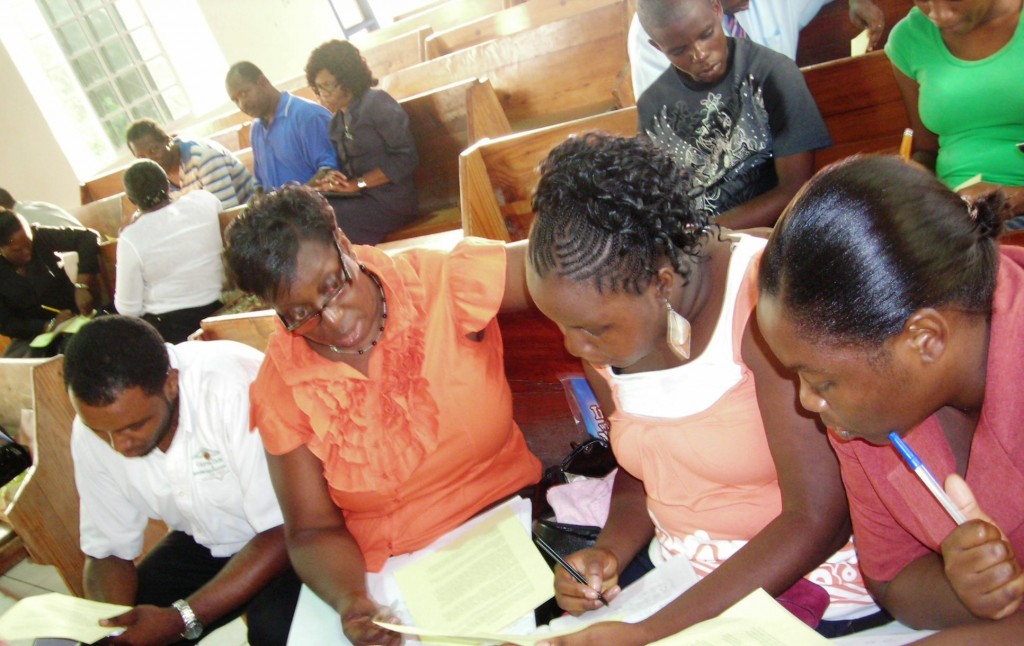 On the main island of Grenada, training continues to expand to new areas, including the town of Sauteurs at the northernmost end of the island. While teaching an evening course in Sauteurs, the Kings were deeply challenged by the dedication of their students. Public transportation between Sauteurs and other towns closes down early. Two students who had heard Stephen preach two weeks earlier came all the way from Grenville (more than 13 miles away). Though they had no transport, they were determined to attend and simply started walking. They didn’t miss a single evening, and each day God provided help for them to get back and forth.

The King’s most recent visit to Grenada was in October/November, 2013, to teach a ministry leadership course based on the life of Moses at the GITE campus in Grenada’s capital, St. George’s. Participants came from all over the island to attend the course.

Since that first Grenada trip in 2010, Stephen and Jane King have witnessed the vision to reach every child in Grenada with the Gospel of Jesus Christ spread throughout churches of this island nation. But the challenges involved in coordinating this effort remain great. On the main island alone, there are sixty primary schools and twenty secondary schools with about 40,000 students.

BCM is working in partnership with GITE to develop national leadership and create a children/youth worker program. The goal is to recruit and equip enough volunteer children’s workers to establish and staff Bible clubs in each of the nation’s schools. Much has been accomplished, but there is much more work to do–“therefore pray earnestly to the Lord of the harvest to send out laborers into his harvest.” (Matthew 9:38 ESV)