By: Jeanette Windle with Freddy Camacho 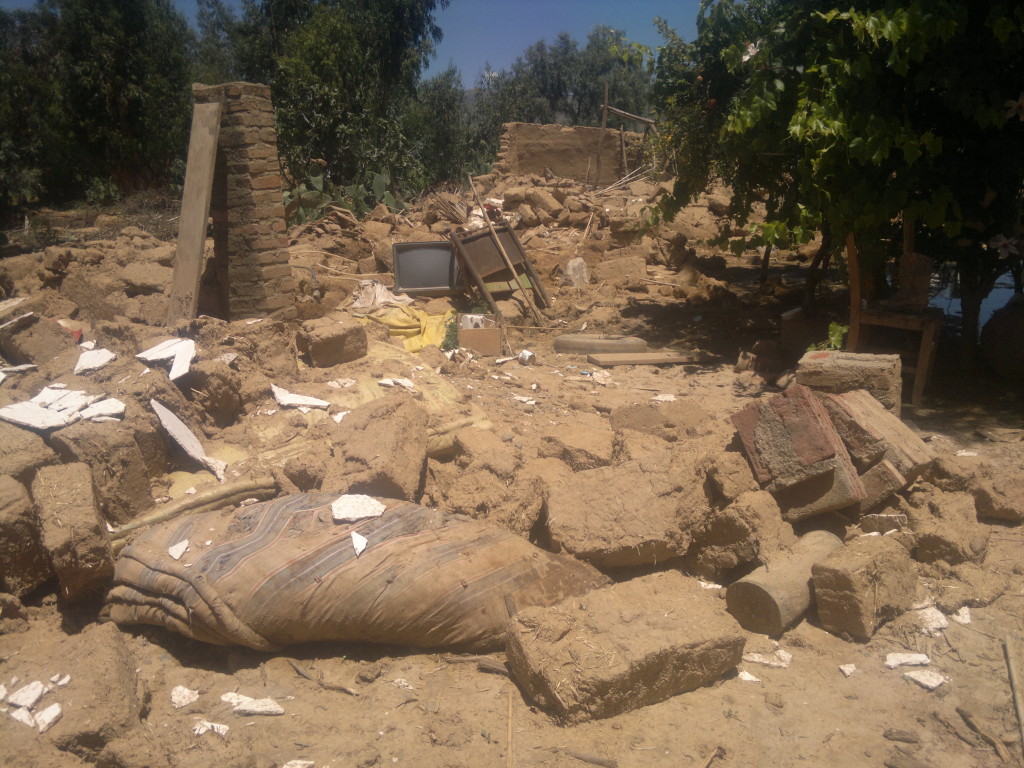 Cochabamba, Bolivia (BCM World)—It was raining again as it had been—not for days, but months. Already flooding rivers had devastated the potato crop that was a mainstay against starvation for this high mountain community in the Bolivian Andes. The adobe houses among which the elderly grandmother picked her way were melting literally from their dirt foundations as water saturated the mud bricks of their construction.

The grandmother had found shelter when a terrible rumbling, grinding roar drowned out the rain. When she stepped outside, it was to find a river of mud, rock and water where a community had been, including her own home that moments before had held husband, children, and grandchildren.

This devastated village was not the only one suffering death and loss across Bolivia. The rainy season that started October, 2013, and ran through March, 2014, had already brought some of the worst flooding in Bolivian history. By January, 2014, the Bolivian government had declared a state of emergency. More than 150,000 families had been affected, along with massive loss of crops and livestock, mostly in Bolivia’s Amazonic lowlands, but thousands more across the highland Andes province of Cochabamba. International and government aid could not keep pace with need. By March, displaced survivors were combating malnutrition, dysentery from dirty drinking water, and disease from unsanitary living conditions.

BCM Bolivia missionaries Freddy and Lizet Camacho had been following the disaster on the news. Freddy and Lizet had both grown up in Cochabamba province. They’d both come to Christ as young children. After Freddy graduated from seminary, they entered ministry. Freddy served as pastor in five different churches, while Lizet was involved in children’s ministry. One-third of Bolivia’s population is under the age of fifteen, a majority living in severe poverty. The Camachos saw the urgency of reaching this future generation with the Gospel. They were among the first to attend BCM children’s ministry training seminars held in the provincial capital, the city of Cochabamba, and almost a decade ago were among the first group to be commissioned as BCM Bolivia missionaries.

Today Freddy continues in pastoral ministries. As well, the Camachos are involved in Bible club ministry, teaching Bible classes in schools, evangelism outreach to communities, and children’s ministry leadership training. Six daughters and a son ranging from 3-16 years in age keep them busy at home. Already the three oldest daughters are involved as volunteers in the Bible club ministry. 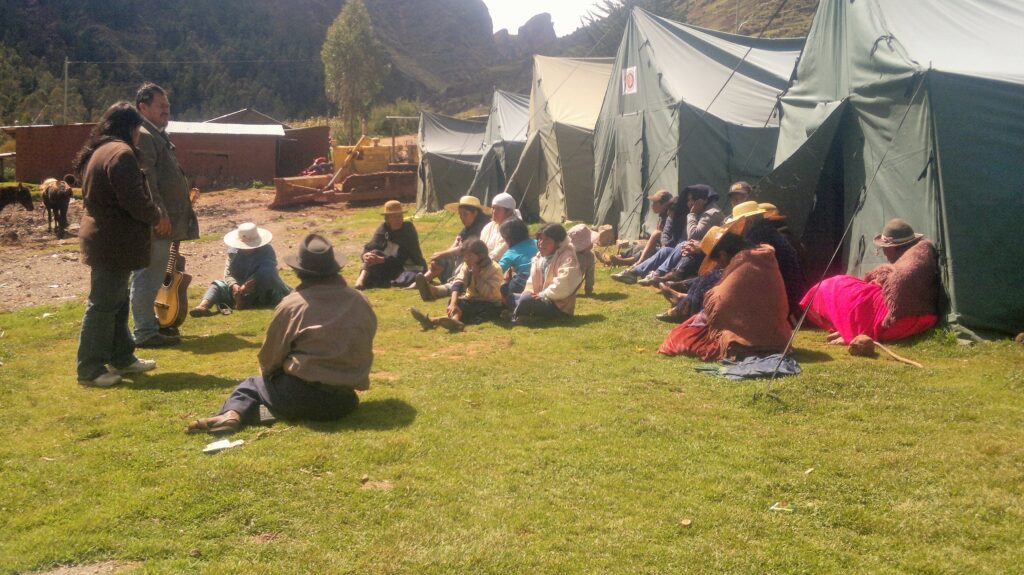 Since the floods started, the Camacho family had participated in church clothing and food drives for flood victims. Freddy and Lizet longed to do more, but the very scope of the disaster was far beyond their resources. Then Freddy received a request from a member of a prior church he’d pastored to visit relatives in Valle Alto, or “high valley”, where landslides had buried a dozen homes and floods had swept away crops and belongings. Driving up the narrow, rutted dirt track to the chilly mountain valley of Arani, Freddy found Sister Dalsi and her family among the survivors, their home still standing. But he also witnessed destroyed homes and survivors living in donated relief tents with neither food nor warm clothing against such freezing temperatures.

Among the affected were a grandmother who’d survived the mudslide that swept away her home along with husband, children and grandchildren because she’d been in a different house at the time. A single mother who supported her children raising pigs had lost her small herd to the flood. A family of seven orphans who’d lost both parents were in desperate need of food and clothing.

Here was a need the Camachos could do something about. Returning to Cochabamba, Freddy shared the need with the church he pastors, Nueva Sinai (New Sinai). The church immediately began collecting bags of clothing and food staples. Two days later, on February 22, 2014, a team of volunteers, including the Camacho children, Freddy’s sister Lidia Chavez, also a BCM missionary, and South Korean missionary Helen Kim, loaded up vehicles to return to Arani.

Freddy had asked Sister Dalsi to gather those families most needing supplies within the mud-brick perimeter walls of her own patio. The team was passing out food and clothing when Freddy’s oldest daughter Helen hurried up agitatedly. Others in this poor community had heard about the giveaway, and a large crowd was heading towards the house.

Concerned a riot would break out, the team quickly closed and barricaded the patio gate. Then Freddy emerged to explain the situation. If the arriving crowd would be patient, any remaining clothing and supplies would be distributed. Meanwhile all were invited for a special program and refreshments the team had prepared. 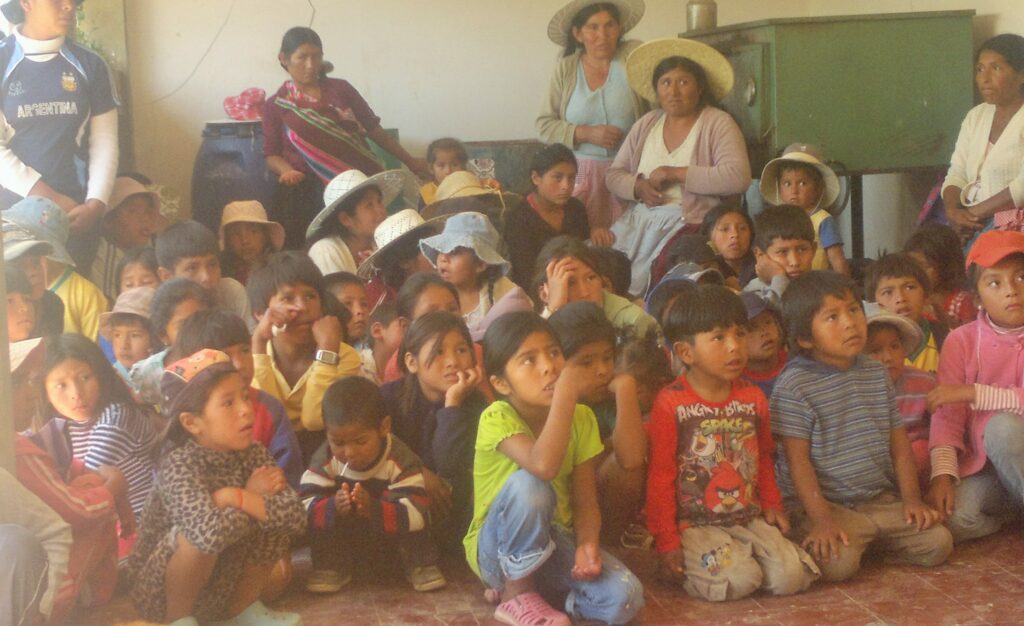 The crowd settled in peaceably for a time of lively music and a Bible lesson. At the end, the team pulled out all remaining bags of clothing and food supplies from the vehicles. To their surprise, far more remained than they’d expected. As Jesus once multiplied a boy’s lunch of bread and fish to feed a multitude, so there proved to be enough for the entire crowd to receive some help.

But one eight-year-old boy dissolved into tears because there were no shoes the right size for his bare feet. Freddy’s sister, BCM missionary Lidia Chavez, reassured the little boy they’d be back. Once home, the team shared the day’s happenings and photos with the church. Immediately the church began gathering more supplies. One man, who’d recently come to Christ, called to donate an entire bushel of sugar.

The next Saturday, the team returned to Arani. This time Freddy had asked Sister Dalsi to have the crowd gather at the community schoolhouse, whose brick construction was not affected by the floods. Again the team shared a program of music and Bible teaching, then distributed what they’d gathered, including a properly-sized pair of shoes for the eight-year-old boy. Enough supplies had been gathered that the team was able to distribute the surplus in a second community also affected by the floods. 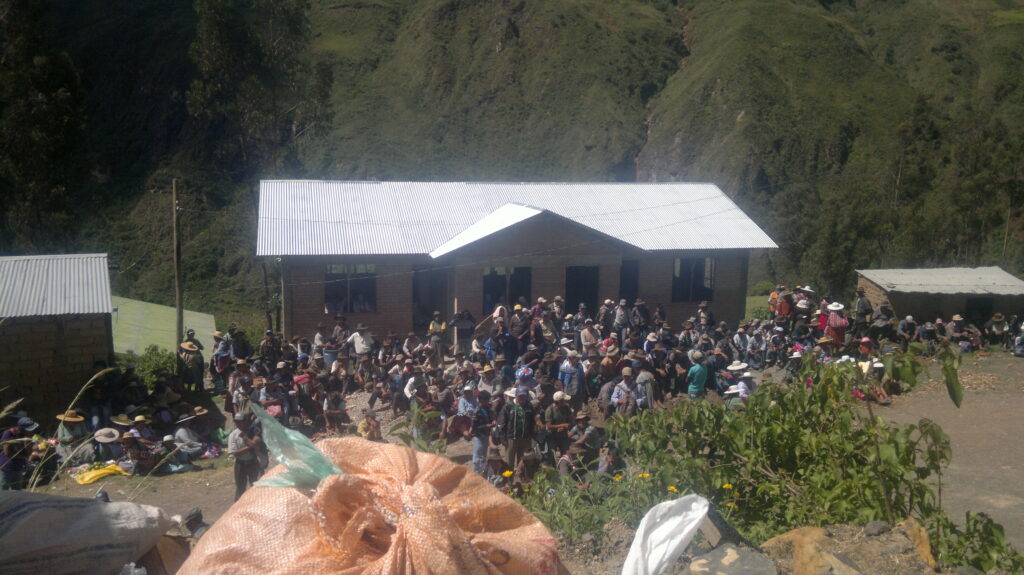 Back in Cochabamba, Freddy was approached about another community in even greater need than the first two. Over 250 kilometers away, Morochata had been devastated by a mud slide. Because it was so far into the mountains with no reliable roads, they’d received minimal aid and were in desperate need of bedding, coats, dishes, as well as food. But by now church members had already given to their limit. Freddy agreed to come, but was concerned they’d have nothing to take.

The Camachos began to pray, and the miracle began to happen. First, an elderly candy vender brought from her scant proceeds 5 bolivianos ($.75US) for the people of Morochata. Then a nursing student offered $20. Over the next two weeks, another woman brought by 100Bs and a church family donated 200Bs. Then a Christian friend in Spain heard of the need and sent a gift to buy food supplies, pots, pans, dishes. Church members dug into their wardrobes for more clothing.

And so the survivors of Morochata gathered in astonished joy as the vehicle filled with supplies jolted into their community. Freddy shares, “They were so grateful that we felt the pain they were feeling at the loss of their loved ones.”

Freddy remembers one little girl in particular insisting on an adult-sized coat. When Freddy questioned her, she announced happily that it was for her mother. “I am astounded with these children, that they will think more about the needs of their parents than their own.”

For the Camachos themselves, these outreach trips have been a leap of faith, even the cost of vehicle fuel a sacrifice. “I’ve worried the gas would run out, and we would be stranded,” Freddy admits. “But God has always sustained us and provided. Psalms 37:25 says, ‘I have never seen the righteous forsaken or their children begging bread.’ God has placed these needs on Lizet and my hearts, and whether few or much help comes in, we feel the urgency to carry the message of salvation to people in need. This is what motivates us to carry out these trips. We prayed. We saw the need. We went.”

Donations to BCM Bolivia’s Disaster Relief Fund can be made HERE.