God is not Dead in Bourges, France 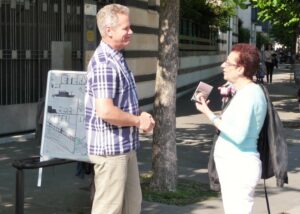 By Jeanette Windle with Tony Schaapman

“God is dead,” Madam Louise repeated insistently. The French woman who’d paused on a park bench to answer a few survey questions was not being obnoxious nor difficult. She was simply reiterating her honest conviction. A conviction not uncommon in her hometown, the BCM street evangelism team discovered by the end of their week in Bourges, France.

The team’s trip to France had begun on the other side of the Atlantic Ocean where for more than twenty years BCM missionary Tony Schaapman has headed up a ministry that reaches the streets of Montreal, Quebec, with the gospel of Jesus Christ while training up young people in the skills of open-air evangelism. Such skills include learning to use a survey questionnaire to engage passersby in conversation and using chalk art, sketch-boards, and gospel illusions to gather an interested crowd for a Gospel presentation.

“Our goal is to show friendship to strangers,” explains Tony Schaapman, “all the while, telling them the truth of the gospel. I call that friendship evangelism.”

Over the years, Tony has trained hundreds of young people to share their faith and seen hundreds more come to Christ. He recalls one young Mexican immigrant in particular named Manuel who stopped to listen to a Gospel presentation. Manuel received Christ and began working himself with the evangelism team. Eventually, Manuel became a street evangelist himself. Now living in France, he shares the Gospel and trains churches in open-air evangelism all across Europe.

But it was another pair of friends’ move to France that precipitated the arrival of Tony Schaapman and team in Bourges the week of May 11-18, 2015. Canadians Steve and Laura Cyr had arrived in Bourges, France, as church-planting missionaries a year earlier in May, 2014. The task facing them was daunting. 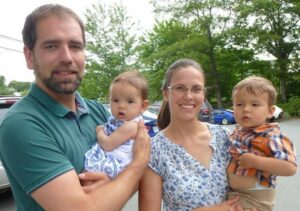 In the dead center of France, Bourges is an ancient city dating back to 54BC with a current population of around 70,000. Among its claims to fame was the coronation of King Louis VII at the spectacular Bourges Cathedral in 1137 AD. Once a bastion of Catholicism, today Bourges is staunchly secular with minimal religious attendance of any sort and just two other small Protestant churches. After a year, the Sunday services held in the Cyr’s home still numbered less than a dozen in attendance.

“People have referred to France as a missionary grave yard,” says Tony Schaapman. “Certainly Bourges, like much of France, is a spiritual desert land.”

So it was not only with a goal of street evangelism that Tony and his team boarded a plane in Montreal, but also to encourage, equip, and help grow this new church plant in Bourges. The Montreal team consisted of six in total—Pastor Sebastien from Tony’s own home church, and experienced street evangelism volunteers Nat, Sarah, Isabelle, and Mireille as well as Tony himself. Joining them in Bourges were six French Christian couples, for most of whom this would be their first experience at evangelism.

First priority upon the team’s arrival on Tuesday, May 12th, was a prayer walk around the center of Bourges. But by that evening, the team had hit the streets, using a simple ten-question survey as a conversation starter. Questions were designed to bring the conversation around to spiritual issues: According to you, what is the purpose of life? Do you believe God exists? Why? In your thinking, is there something after death? If so, what? In your view who is Jesus? What was the main mission he came to accomplish?

“The goal was to explore what they believed and why,” Tony Schaapman explains. “Then when we were done, we would ask permission to share what we believed and why. Using the survey helps us really understand what people believe, which in turn helps us in developing ways to effectively share the gospel. But beyond that, since we’ve taken time to really listen to them, they in turn are now favorable to hearing us out too.”

Despite the city’s reputation as spiritually closed, the team found the people of Bourges approachable and open to conversation. Being strangers did not prove a disadvantage.

“The moment we opened our mouth, they could tell we were from Quebec,” shares Tony. “This was a great advantage as the French love Quebec, and it opened many opportunities for us to share the gospel.” 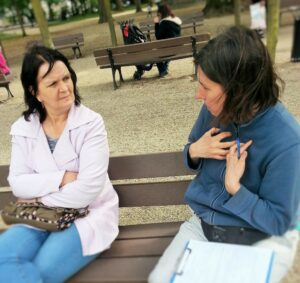 The next few days alternated with evangelism training sessions for the French Christian volunteers and putting that training into practice throughout shopping centers, parks, and streets of Bourges. Several encounters stood out. One girl took the survey very seriously, explaining that she was more of a Buddhist in her beliefs.

Tony disclosed to her that he too had once embraced Buddhism. “I shared that the reason I went Buddhist in my youth was because it fit well with my spirit of rebellion, as it did not require me to change anything about my life and it was cool.

“That is exactly why I chose it!” The girl responded. Her honesty paved the way for the team to share Jesus Christ with her.

Another couple in their late forties first identified themselves as atheists, cynical towards the Catholic Church as well as French culture in general. But after some discussion, they admitted they were actually more agonistic, then as the conversation advanced, showed themselves very open to hearing the Good News.

“We must pay our debts and live life,” they responded when asked the purpose of life.

Despite ample material possessions, the couple admitted an emptiness in their lives and real fear of death. But though the team shared how they could have eternal life in Jesus Christ, the two of them did not at this point make any further response. The team continues to pray that the seeds planted in their hearts will one day give fruit. 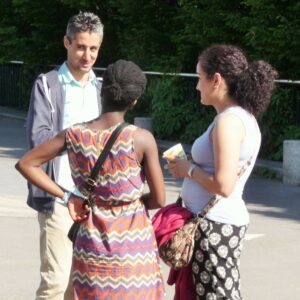 How different the response of another woman named Laura. On Thursday evening, the Cyr’s church group and visiting team hosted a special meal and testimony time to which those the group had met during their outreach were invited. When Laura accepted the invitation, she confessed she normally suffered from high anxiety when around an entire group of people. But that evening she displayed only enjoyment as she shared a meal and listened to testimonies given by team members.

Once the event was over, Laura expressed her desire to accept Jesus as her Savior. When asked why, she replied, “Because I am stained.”

From Bourges, the team headed to Paris, three hours travel, where they spent two more days sharing the gospel on the streets of France’s capital city before boarding a flight back to Montreal on May 18th.  While Laura was the only respondent to make an open confession of faith during the team’s time in France, the Cyr’s fledgling church plant in Bourges has been left with many contacts to follow up and a newly trained street evangelism team of their own.

Another consequence of the trip is that the facility rented near Steve and Laura Cyr’s home in Bourges for the testimony evening event has now been made available for holding a weekly Sunday service. Tony Schaapman sums up, “This is a real praise as such facilities are not easy to come by nor very affordable. God willing, we will return to Bourges next year to do more of the same outreach.”

Meanwhile, Tony and his team ask brothers and sisters in Christ reading this article to join with them in praying that seeds sown in hearts during their time in France will take root, grow and produce the fruit of lives transformed through faith in Jesus Christ.

For more information about BCM open air evangelism ministry or possibilities of training or a short-term ministry team, contact Tony Schaapman at: tonyschaapman@gmail.com