Sharing, Loving, and Caring in Cameroon 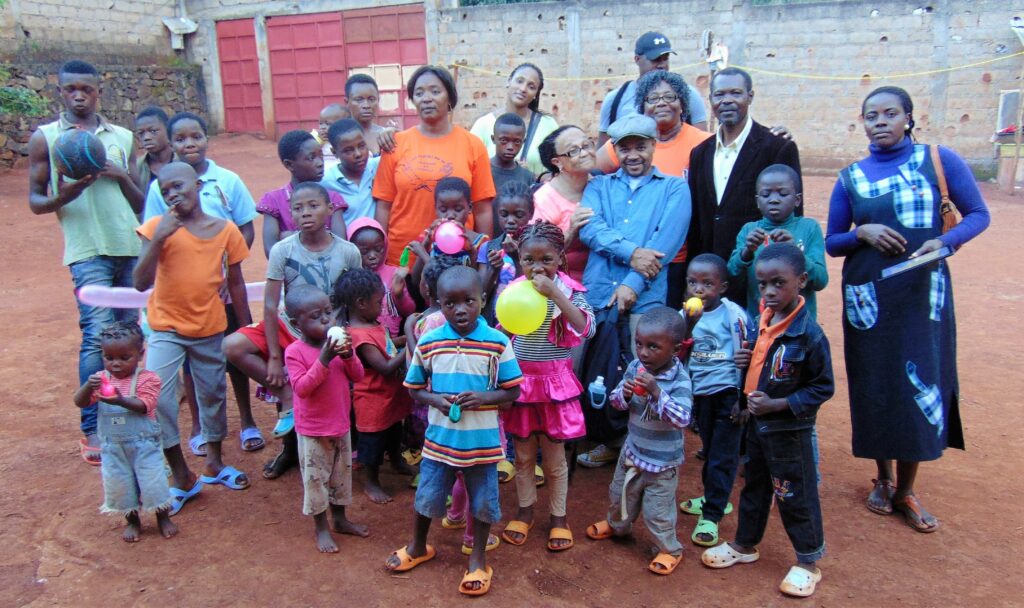 Much of the West Indies island chain’s population reached the Caribbean during the late 17th and 18th centuries on slave ships from West Africa, destined for labor in tobacco and sugar plantations. So how does a West Indies pastor’s wife end up back across the Atlantic in Cameroon, West Africa? Simply put, to share the love of Jesus.

Orementa Murphy grew up in St. Vincent, largest island of the West Indies nation called Saint Vincent and the Grenadines, known for its yacht-filled harbors, millionaire-owned private isles, white-sand beaches, and the filming location for the Pirates of the Caribbean franchise. In her twenties, Orementa heard the gospel for the first time when invited to visit a church in her hometown. Convicted of her sins, she trusted Jesus as her Savior.

Orementa moved to Barbados, where she met her husband, David Murphy, a pastor who in the past three decades has ministered in the islands of St. Vincent, St. Lucia, and, most recently, Antigua. While in St. Lucia, the Murphys attended a children’s ministry leadership training led by BCM missionaries. In 1995, Orementa attended BCM’s missionary candidate school in the United States and was appointed a BCM missionary.

In 2002, the Murphys took a pastorate in Antigua, a Caribbean island east of Puerto Rico that is only 87 kilometers in circumference and home to 80,000 residents. Also an acclaimed tourist destination, the island is known as the “land of 365 beaches”. There Orementa began leading children’s Bible clubs and ladies’ ministries in their own church as well as other area churches. She first came in contact with Cameroon through one of her ministry partners, Shirley, a deacon’s wife from the church David pastored. A missionary friend of Shirley’s who worked in Cameroon had shared with churches in Cameroon’s largest city, Douala, about Orementa’s and Shirley’s ministries in Antigua and other West Indies islands. These churches extended an invitation for Orementa and Shirley to speak at their annual women’s conference, called SHALOCA, an abbreviation for “Sharing, Loving, Caring”.

If Antigua is the “land of 365 beaches”, Cameroon has been categorized as “Africa in miniature” due to its diversity. On the west coast of central Africa, it shares borders with Nigeria, Chad, Central African Republic, Equatorial Guinea, Gabon, and Republic of Congo. It has five geographic zones, exhibits all of Africa’s major climate zones, and has hundreds of dialects, with French and English being its official languages. Northern Cameroon is mainly Muslim, and the country drew international attention in 2014 when the Islamic terrorist group Boko Haram kidnapped 276 school girls in neighboring Nigeria and smuggled some into Cameroon.

Orementa and Shirley spoke at the Douala women’s conference in both 2013 and 2014. On their second trip, they also visited an orphanage in the capital city of Cameroon’s western region, Bafoussam. It was against this background that Orementa and Shirley returned to Cameroon in June, 2016, for a six-week ministry trip. Three other teammates included Orementa’s own son Dillon, her daughter-in-law Rhoda (married to son Johanan), and youth pastor Robert Williams.

Flying into Douala, a port city on Cameroon’s west coast, the team then took a nine-hour bus ride to Bafoussam. Cameroon buses are notoriously over-crowded and packed to the hilt. This one was repeatedly stopped to check for stowaways, falsified documents, and possible Boko Haram captives. The team’s translator was needed in order to explain travel documents, where the team was headed, and what they were doing. All a stark contrast to traveling across tiny, safe Antigua! 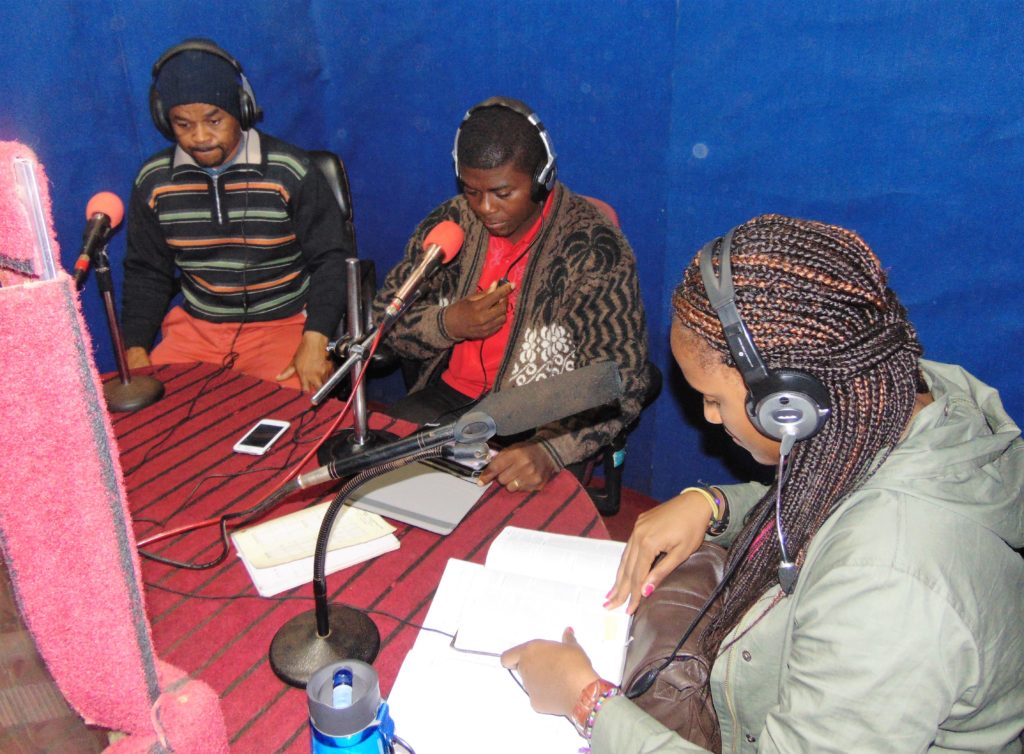 While in Bafoussam, Dillon and Robert had opportunity to speak concerning the biblical role of husbands and fathers. For many young Christian men in Cameroon, this is new information and sparks a lot of questions since the biblical description of a man’s role in the home is in stark contrast to local culture, where women are treated as property and men have the right to beat their wives. Dillon, Robert, and Rhoda continued this conversation via a local Christian radio station that transmits all across Bafoussam, answering questions from callers, most of which concerned the roles of husbands and wives.

The Antigua team also visited the orphanage Orementa and Shirley had visited in 2014, where they presented a donated computer to orphanage director and founder Rose. A former nurse, Rose serves as both mom and dad to the home’s twenty-four children, sharing God’s love with them while also providing a solid education. The team also presented each child with some essential supplies.

The next leg of their trip was a three hour ride to Bamenda, capital of Cameroon’s northwest region. In Bamenda, the team worked closely with a branch of the Douala church, beginning with Dillon and Rhoda speaking to a choir group on the meaning of true worship. The team ministered to teens, ladies, and children before the local pastor took them to Bali, a city close to the Nigerian border that is becoming progressively more dangerous due to the increased presence of Boko Haram.

Orementa explains, “Bali is a very spiritually dark place, but the light of Jesus has begun to shine through. We visited two cell groups in homes and were able to pray with a widow of one of the deceased [tribal] kings of that region. She had trusted Jesus as her Savior and now leads a cell group in her home. Despite the rain and darkness outdoors and the spiritual darkness of the area surrounding us, we were encouraged that God used us to be a source of encouragement to these people.”

At 5am, the team boarded another crowded bus for an eleven-hour trip back to the coast, this time to Limbe, which has been nicknamed “the town of friendship” due to the abundance of tourists it welcomes each year. Limbe lived up to its name as the residents proved most amiable when the team went door-to-door, sharing the gospel.

“Many people had lots of questions!” Orementa describes. “We met one young, married mother who had previously trusted Christ as her Savior and was attending a church. But she stopped going when her father began to demand she return to his [Catholic] church. He has the authority to not only beat her into submission, but to exile her. I was able to encourage her, and that very night, she returned to her church and rededicated her life to the Lord.”

Another woman had been a singer before a horrific car accident left her unable to walk and with very slurred speech. Orementa shares, “She had stopped coming to church because she was so angry. My son [Dillon] encouraged her to return to church and to begin to sing again. She came that night—and sang a song she had written!” 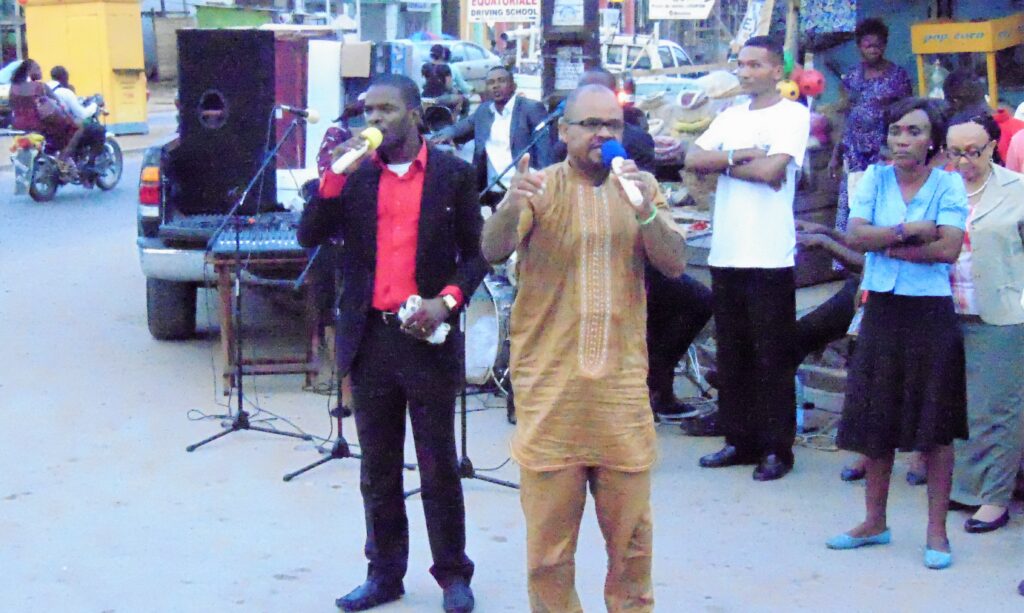 While in Limbe, the team visited another orphanage, where they presented the children with necessary food items and school supplies. They also taught courses on evangelism and effective children’s ministry. The team then returned to Douala, where Orementa and Shirley spoke once again at the annual women’s conference. This year’s theme was “Experiencing the Miraculous Transformation of Christ”. Orementa spoke twice, using as examples such biblical personages as Mary Magdalene to demonstrate Christ’s transforming power. Shirley also spoke during the week, and Rhoda was a guest singer.

Open-air meetings were part of the program in Douala as well. Orementa describes: “Specific areas of the city were chosen for these meetings due to the known spiritual darkness there. When we arrived for the first meeting, none of our equipment worked, so the event was delayed. After much prayer, we had a sudden break-through and were able to begin. People would stop their vehicles and bikes just to listen.”

Dillon was the keynote speaker both evenings. On the second evening, he spoke on the woman in Luke 8 whose issue of blood was healed by touching the hem of Jesus’ robe. A woman in the crowd turned out to be dealing with the issue. After the meeting, she came forward and made herself known. She, along with many others, trusted Christ as her Savior, then came to the church for additional help.

Then, as quickly as it had begun, the trip was over. The team returned to Antigua tired, but blessed. Spent, yet encouraged. The harvest in Cameroon is still plenty, and there remains much work left to be done. Churches begged them to stay longer, and before the trip had even ended, the team had requests from five additional churches to please come and do ministry in their areas. Though the next trip isn’t even on the calendar yet, a waiting list has already been started.

“All glory goes to God alone,” Orementa sums up their time in Cameroon. “Not one team member could afford this trip financially. The call was obviously from God because He supplied our every need.”

She adds, “I’ve been very often asked why I do this or if I would do it again. My answer remains unchanged. Because the love of Christ motivates me. He left heaven for me which is much further than going to Cameroon. Yes, I will do it again as long as He goes with me.”

Pray for Orementa Murphy, a BCM missionary from the West Indies sharing the love of Jesus in West Africa. 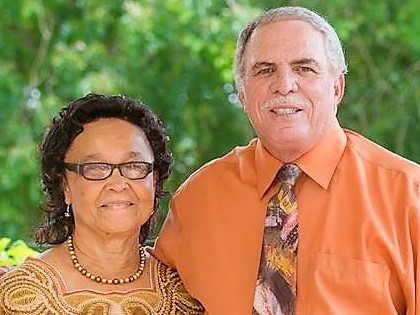