Partnering for Children in Cuba

The church in Cuba is alive and vibrant!” expressed a previous BCM World article (Cuba: Wide Horizons in the Pearl of the Caribbean, BCM World, Spring, 2014), and a recent BCM Peru ministry team to Cuba can testify to that truth.

BCM missionaries Marion Odico, Jonatan Odicio and Francisco Barnuevo first traveled from Peru to Cuba in 2014 to hold children’s ministry training in a town called Moa. Among approximately forty trainees was the children’s pastor of the host church in Moa, Cecilio Rodriguez. Since then he has been motivating his staff and congregation to work among Cuba’s children, and in 2016, Pastor Cecilio invited BCM Peru to bring another team to Cuba to partner together in children’s ministry.

The 2016 team, composed of Jonatan and Shantal Odicio, David and Katty Paima, Daniel and Joan Irrazabal, and Guillermo Odicio, traveled to Cuba from July 5-16, 2016. Their two ministry objectives were a VBS at the church in Moa and a children’s camp. Arriving in Moa for the Vacation Bible School, the team was delighted to discover that more than forty local Christian youth and adults had volunteered to help. Which was a blessing since more than 500 children attended the three days of VBS. Four local Cuban children’s ministry trainees had been studying the VBS materials beforehand and did an outstanding job of teaching Bible lessons. 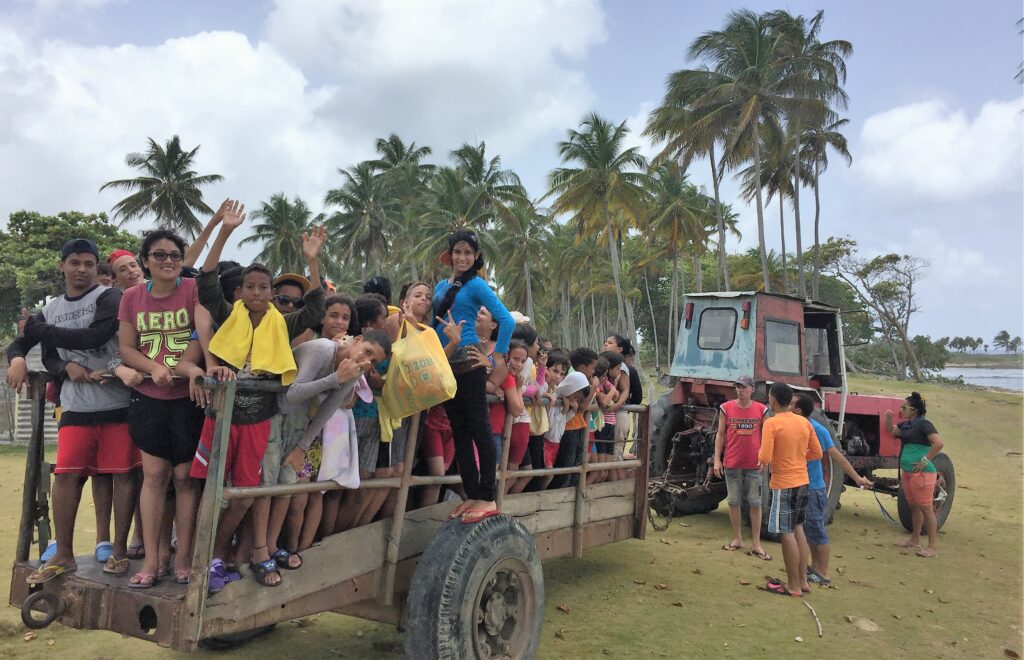 After the VBS, the team traveled to the camp facility in Nibujon, a tropical paradise where river and ocean meet. Almost a hundred children along with adult and teen volunteers were in attendance. The cost per camper was only $3USD, but in Cuba where a medical professional makes less than $100USD monthly salary, even this was a financial hardship for many children. To supplement, along with their bedding and backpacks, each child arrived with small sacks of uncooked rice or beans to contribute for meals. Due to high transportation costs, Cuban children have few opportunities to travel, so they greatly enjoyed God’s wonderful works of nature from the beach to the beautiful countryside around the camp.

More importantly, campers learned more about God and were challenged to make God-honoring decisions for their lives. By the end of the closing bonfire, a majority of the campers had stood to their feet to declare their trust in Jesus for salvation or to commit themselves to be “living sacrifices” (Romans 12:2) to bring glory and honor to their Lord Jesus Christ.

Saying goodbyes was one of the most difficult parts of the whole trip. The hosting Cuban ministry leaders and volunteers expressed how much the BCM team’s visit had encouraged them and above all their desire to put all they’d learned over the past ten days into practice to continue reaching more Cuban children for Christ.