CUBA: WIDE HORIZONS IN THE PEARL OF THE CARRIBBEAN 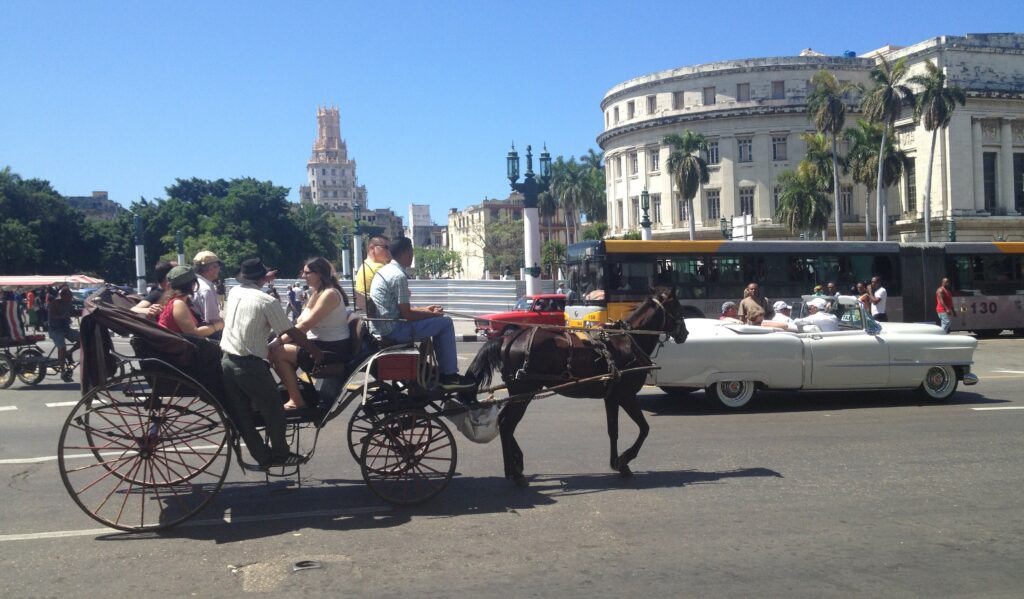 By: Marion Odicio Cuba (BCM World) —Cuba has been lovingly termed the “Pearl of the Caribbean”. Now I know why! I’d never been to this often forgotten—and certainly surprising—country in the northwestern part of the Caribbean. But Latin America has always had a special place in my heart. Although born and raised in the Netherlands, I’ve served in Peru as a missionary under BCM International with my (Peruvian) husband Carlos Odicio since 1994. Since receiving training in BCM’s teacher training course, In Step With The Master Teacher in 2004, I’ve known God wanted me to make this great tool for training children’s ministry leaders available throughout the Spanish speaking world. After teaching ISMT in Peru, Bolivia, Colombia, Aruba, Brazil, facilitating training in Ecuador, and training Hispanic churches in the USA, I was thrilled when doors opened in March, 2014, to conduct an ISMT training for ten days in Cuba. By then, our family had moved from Peru to the USA to begin a new ministry under BCM: Latino Ministries. So an added joy was team-teaching with my oldest son, Jonatan, (now Director for BCM Peru) and Francisco Barnuevo (BCM Peru). Getting to Cuba wasn’t easy—even though I have a European passport—at least not from the United States. Although Cuba is only a forty-five minute flight away from Miami, the U.S. government embargo of Cuba permits no direct air travel there. So I booked the only reasonable connection I could find through the Dominican Republic. After one missed flight and delays, I arrived safely, meeting up with Jonatan and Francisco. The reason for our trip was to train Sunday School teachers and children’s ministry leaders in the Cuban province of Holguin. We had met the pastor of our host church when he and his wife attended a conference hosted by BCM in Lima, Peru, almost three years ago. But we had no real idea of what to expect—not about Cuba, neither about the church. The host church is in a much polluted area in the nickel mine region at the far eastern side of Cuba, near the crocodile’s neck. (If you never noticed that Cuba has the shape of a crocodile- neither had we, but it’s what Cuban children learn about their country!) On Sunday we found the church bursting out of its seams with 1200 people in attendance. Sunday School easily counted 250+ children. 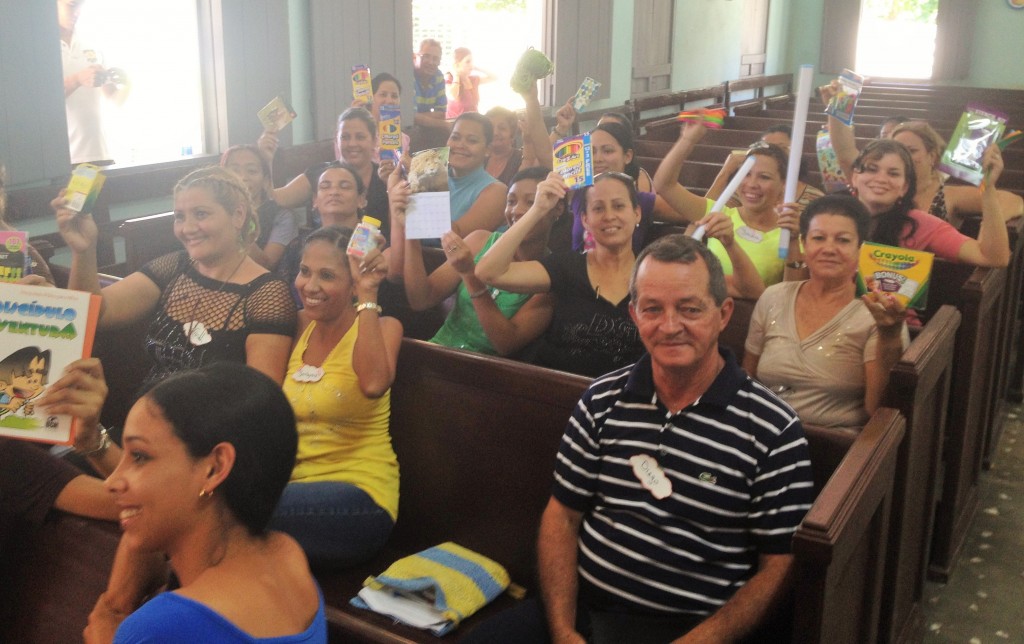 Thank You USA for Sending Supplies

On Monday morning, we loaded into a truck converted for people transport to travel to a camp some thirty miles further inland. Though bumpy, it was a beautiful trip through lush forests, around high mountains, through coconut plantations, and along an unspoiled shoreline with white sandy beaches. Approximately forty people attended training, representing nine area churches. We conducted training sessions all morning, all afternoon, and also two hours or more in the evening. That is a lot of information! Yet, we never saw the trainees sleepy, bored, or weary. Like sponges, they drank in the teaching and didn’t want us to stop. We ran 17 of ISMT’s 22 sessions, a four-session training course on evangelism called Sharing Christ with Kids, and a puppetry workshop. After the week of ISMT training, four teachers, including the children’s pastor of our host church, remained for two more days of specialized training that would enable them to teach ISMT themselves in other churches throughout the country. We left them with an action plan in place and materials to get started. Two USA churches had collected a lot of teachers’ supplies for the participants, and these were much appreciated as such supplies are hard to come by in Cuba. 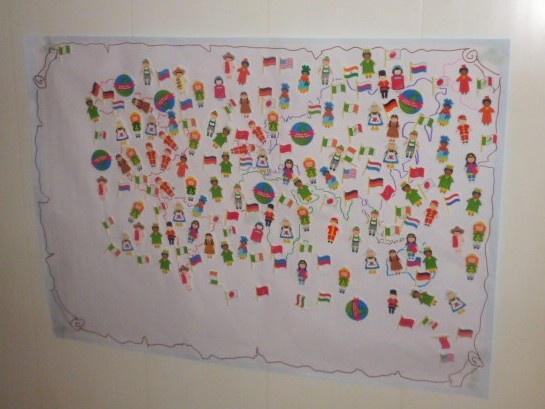 On Sunday morning, our host church asked us to minister to their children. While Francisco preached to the adult congregation, Jonatan and I were privileged to teach the children about missions. The children were delighted to each receive two brightly-colored foam stickers representing various countries around the world—one of a flag, another of a child wearing that country’s national costume. At the end of the program, we encouraged the children to respond by placing one of their two stickers on a world map if they were willing to say to God: “Here am I, send me.” The end result? A world full of flags and children! We were amazed and humbled to see their sacrificial response in giving up one of their oh-so-precious stickers to give back to God! We learned a lot about the Cuban reality of life. Education is excellent and free, so people are highly educated. It is common to meet people with a masters or even doctorate degree. However, even a medical doctor in Cuba lives on a mere $40.00 a month. The government provides a ration of rice, black beans, oil, sugar and coffee per month, and just one piece of bread per person per day. Milk is only provided for children up to seven years old. Occasionally, there’s some chicken, pork or lamb. The staple is a mixture of rice and beans called congrís with tomato salad and fried sweet potatoes, or plantains. We ate this twice daily for ten days, but it was delicious, and we never got bored of it. Without material distractions, the Cuban believers we met had one passion and one goal in life: to live a life that honors Christ and to make Him known to the world. For now, that world is still very much confined to the island of Cuba. However, God’s people in Cuba are proactively and intentionally preparing to take the Gospel to the ends of the earth—“when the horizon widens”. Meanwhile we found the Cuban believers to be very audacious in their faith and consecrated in their lifestyle. I was dealing with some necessary paperwork when a clerk noticed that my passport holds a religious worker’s visa for the United States. She asked me what my religion is. I told her I am an evangelical Christian and that I know Jesus Christ as my Savior. Much to my surprise, she took off her glasses and started to cry. Between quiet sobs she confessed that she, too, is a believer. Opening the bottom drawer of her desk, she reached down underneath other things and took out a small Bible. It was hidden lest it be discovered and cause her to lose her job. She was fortunate to even have a Bible. Only 25% of the 250+ children we ministered to on Sunday morning own a Bible. Some of the teachers who were in the training do not have a Bible. Beautiful Cuba and the believers there left me deeply impressed, with a stronger understanding of what it means to be fully committed to the cause of Christ, to sacrifice for the privilege of partaking in His suffering, to serve Him no matter how high the cost. God’s Church is alive and vibrant in Cuba, and desiring to be a blessing to others. Although they lack resources—Bibles, Christian books, teaching aids, Bible lessons, apart from so many stuff we take for granted—they refuse to let this keep them from being a missionary sending nation. In their poverty, believers have learned to tithe, to give for missions, and to share with those who have even less. They minister to orphans, to inmates, to children with cancer, to children with Down syndrome, in rural areas and to students. Cuba is not just sowing the Gospel seed, but harvesting its own harvest and preparing one day to be a sower of the seed of the Gospel in other fields. Let’s not forget our Cuban brothers and sisters in Christ. Let’s pray for their pastors, that they may remain bold in their preaching and in their convictions. And let’s help them to be and to do what God called them to be and to do in this time—and in the time that is waiting “when the “horizon widens”.