FOOTSTEPS OF FAITH BECOMES A “FISHING POLE” FOR ROMANIA’S CHRISTIANS 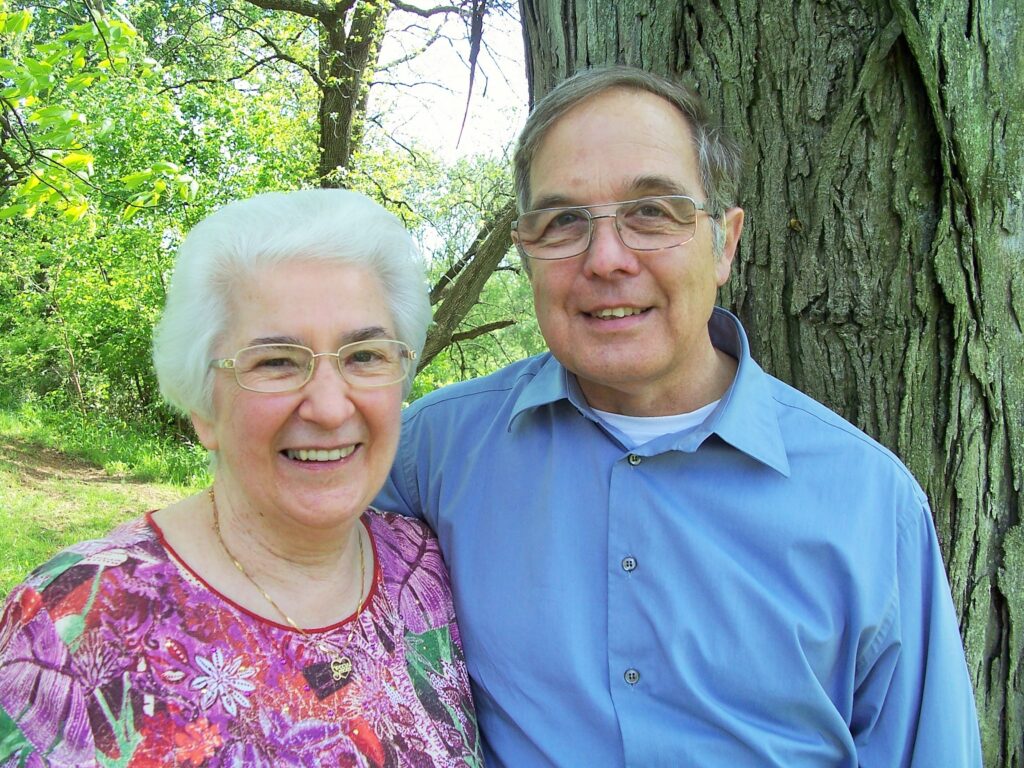 “We have learned more from you through the years than from any other group.  We are so thankful that you gave us a ‘fishing pole.’ Others gave us many things, but they didn’t encourage us to prepare and to do things ourselves.”

“Many missionaries have visited us through the years, but you are the only ones who have come back.”

These quotes are just a few from the feedback BCM missionaries, Bob and Sandy Barber have received in response to their ministry in the country of Romania. The Barbers made their first trip to Romania, located south of Ukraine in Eastern Europe, in 1991. By then they’d served for twenty years with BCM in Scotland. Romania’s Communist regime had fallen in 1989, permitting once again access to this small country just off the coast of the Black Sea. Romanian Christians had spent years living under oppression and persecution with minimal access to biblical instruction, training, and their needs were myriad. Bob and Sandy answered their plea for help.

Sandy recalls, “Opportunities to serve were mind-boggling. In one weekend, we conducted a two-hour adult Bible study, a three-hour youth fellowship, five hours of teacher training, two four-hour seminars for young couples, and Bob preached. On another occasion, while Bob was preaching in a three-hour church service one Sunday morning, I taught five separate Sunday School classes.  In the course of one trip, we did 38 hours of teaching, had 27 meetings with individuals, another 13 meetings about translation projects, and slept in 21 different beds.”

While the Barbers’ primary ministry focus was reaching children and training others to do the same, Bob and Sandy found themselves filling pulpits and leading marriage seminars. Sandy explains, “Often we were asked to prepare fifteen hours or more of teaching on topics like Christian marriage, building a Christian home, bridging the generation gap within the church. Now Romania has many books on such topics, but back then there was virtually no Christian literature.” 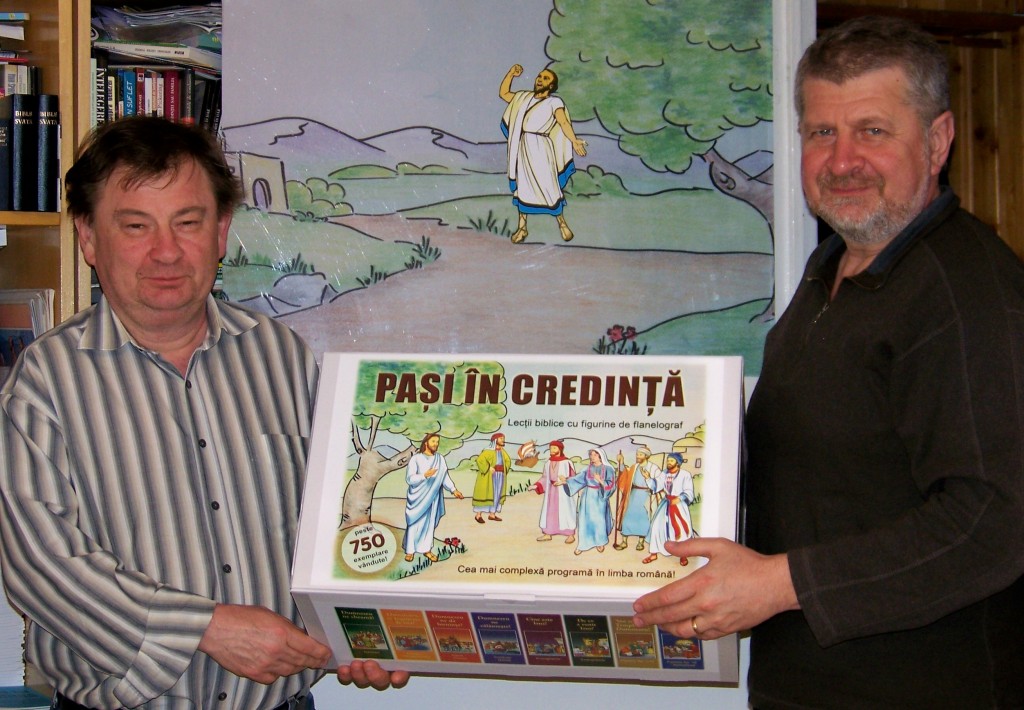 Out of all the material the Barbers introduced to Romania, the one that has had the greatest lasting impact is BCM’s chronological Bible teaching curriculum Footsteps of Faith (FoF). The Barbers recount, “March 23, 1993, was a day of more significance than we could have imagined. We gave Rei, a Sunday School superintendent, four of the eight FoF teacher’s volumes along with flannelgraph figures as a gift. When we visited Romania again that autumn, we stopped by to see Rei.  He immediately launched into the most convincing promotional we have ever heard for FoF!!  Having used the material in his church’s Sunday School of 450 children, Rei was thoroughly convinced that this was what his country needed—and asked permission to begin translating it!”

Rei was serving with a ministry organization, New Hope International, that published Christian material in Romania. A translation agreement was reached, and by early 1996—just one and a half years later!—all eight volumes of FoF were ready for distribution in Romania.”

Flocking (the fuzzy backing that makes cut-out figures stick to a background) is a tedious process that makes flannelgraph expensive to produce. But FoF publishers in Romania have now devised an ingenious solution that has made it much faster, therefore more affordable. Swiping an ordinary kitchen sponge over front and back of anti-glare plastic sheets allow unflocked figures to stick to the front and colored story background to the back for up to a week. The plastic sheets can be rolled and put in a poster tube when not being used or while being shipped.

Delia, a children’s worker from Zalau, Romania, writes, “Footsteps of Faith is a great aid in teaching the many children in our church. The extremely well organized lessons help us to teach the Bible so that they can understand it. The images keep them focused. I am very pleased to see the results of using this material.”

However, just having good curricula is only half the battle. After so many years of few resources, the Romanian church needed instruction in how to use the program. When the Barbers first traveled into Romania, they had no curriculum for training teachers. As soon as BCM’s teacher training program In Step with the Master Teacher (ISMT) became available in 2001, the Barbers worked to have it translated into Romanian. Not only did ISMT meet the need of training teachers, the Barbers were able to implement the Train the Trainer program, an advanced course to become ISMT trainers, thereby multiplying both teachers and trainers. 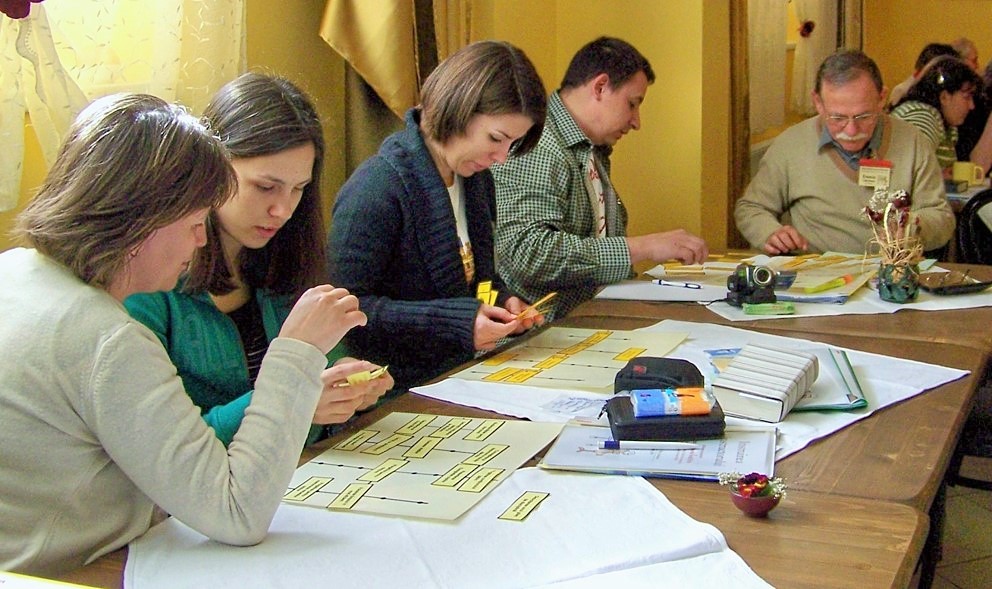 Sandy shares the following quotes from a few who have attended Train the Trainer seminars:

“I’ve attended other training before and left so discouraged that I did nothing about it. This training was different, though. Now I’m ready to do something!”

“We taught the entire ISMT course to 44 children’s workers in our region within a year of attending Train the Trainer.”

“We have a great group of helpers that we are planning to do ISMT training with. Most of them are the children of those you [the Barbers] originally trained for our first annual summer holiday club many years ago!”

In March, 2014, a special Mobilize 2014 conference was held in the Ukraine, its purpose to prepare regional leaders to head up the the ISMT and the Train the Trainer programs in their countries. Among the new Lead Trainers were two for Romania. Daniel and his wife Camelia are excited and challenged to have the massive responsibility of training children’s workers and additional trainers across Romania. 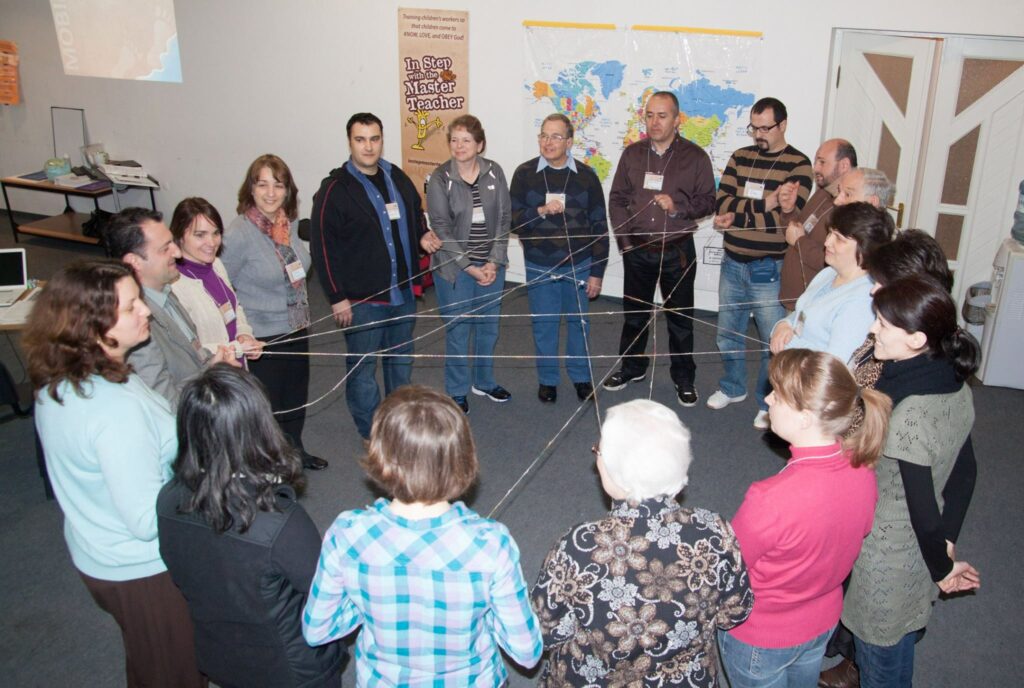 Bob and Sandy are quick to say their ministry in Romania has flourished because of one main strategy—relationships. Frequent visits to the country and lots of training sessions are only fruitful if relationships are maintained between the visits. Pastors, pastor’s wives, and young married couples have come to trust and confide in them simply because they made themselves available. One ministry leader shared, “The Lord brought you into our lives when we were very much alone and unsure if we were going to make it in the ministry. You believed in us, and visited us regularly. I am sure there are many others like us in your lives, yet you always made us feel like we were the only ones.”

“BCM’s ministry in Romania has truly been the Lord’s doing and it is marvelous in our eyes,” say Bob and Sandy. “It is our prayer that God will continue the wonderful work He is doing through our brothers and sisters in Romania and bless their efforts with fruit that remains to His glory.”