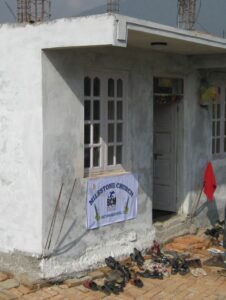 Milestone Church before the earhquake

“It was Saturday, April 25th, and our believers were all gathered in church for the 11 a.m. worship service,” describes Rev. Robbin Vaidhya, BCM Nepal director and pastor of Milestone Church in Kathmandu. (Since Sunday is a work-day in Nepal, Christians typically hold services on Saturday, the designated “weekend”.) “We were singing hymns and offering praise when we felt a shaking. We kept singing, but as the shaking continued, believers began leaving the hall one by one. I emerged last with a group of teenagers. By then I sensed great danger. When I came out, I saw plastered walls cracked open and windows exploding from their frames with great sound. We all fell to the ground, praying. The shaking continued for fifty-six seconds before it finally finished.”

By the time the congregation was able to rise to its feet, it was to a scene of utter devastation. Mud-brick and cinder-block homes were piles of rubble. Mountain slopes had given way, burying homes below. News reports would soon confirm that an earthquake of 7.8 on the Richter scale had shaken Nepal, its epicenter just 85 miles east of Kathmandu. Within less than a minute, thousands were dead and upwards of a hundred thousand homes destroyed across much of Nepal.

The BCM Nepal congregation on top of a ridge outside Kathmandu offered thanksgiving that every member had escaped to safety outdoors. Over coming days, reports filtered in from each of BCM Nepal’s eight full-time missionaries and five additional volunteer church planters. Miraculously, not a single church family had suffered injury during the quake. But many had lost their homes, and the irreparable damage to the Milestone church structure itself was a devastating blow. Above all, because its original construction had been such a miracle.

When Rev. Robbin Vaidhya had knelt in a rice paddy with BCM president Marty Windle and other ministry leaders in late 2007 to dedicate land for BCM Nepal’s first church building, it had seemed an unlikely dream. Nepal was the world’s only remaining Hindu monarchy, preaching of any other faith against the law. Then came the miracle. Within a year, the monarchy had fallen, giving way to a secular republic and freedom of religion. By 2009, Milestone Church stood completed atop a hilly ridge looking out over the valley of Kathmandu (See From Rice Paddy to Light on a Hill, BCM World, Summer 2010). 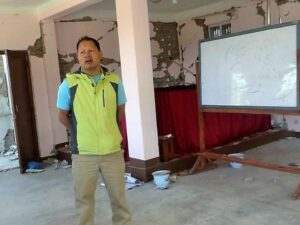 Now all that remained of that beautiful vision was broken walls and crumbled plaster. The entrance piazza overlooking the valley had literally broken away and tumbled down the mountainside. But Robbin Vaidhya would be the first to proclaim that a church is not its building, but its people. Despite their own losses, the BCM Nepal church body began immediately to reach out to their hard-hit neighbors. A large open-air tent structure was pieced together, and neighboring villagers joined believers sleeping under its shelter. A communal kitchen was set up to share food. Church services resumed under the tent.

The nightmare was not over with the initial quake. Over following days, hundreds of aftershocks shook Nepal, making any return indoors too dangerous. In response, tent cities cobbled from any materials available sprang up across Nepal. Even these offered scant safety, especially when storms rumbled in. By Sunday evening, May 3rd, the Milestone congregation and their neighbors had been sheltering under canvas for over a week when a thunderstorm opened floodgates overhead. Robbin Vaidhya shares:

“We tried to protect our tent, but it was very hard. Then I remembered the word of God when Jesus rebuked the storm on the Sea of Galilee. With faith, I called together our believers and encouraged them to pray, rebuking the storm in the name of Jesus. After five minutes, the storm calmed, and we saw the moon emerge.”

That next Friday, May 8th, Robbin was awakened in the middle of the night. Kneeling to pour out his heart in prayer, he heard a distinct message from the Holy Spirit. “God told me we needed to move from this tent to a safer place.”

When dawn came, Robbin sought out a still-standing house and bartered a rental agreement. Before the Saturday morning church service, all essential belongings had been moved in-doors. He was heading to church when God again spoke to his heart, warning that nightfall would bring a heavy storm. Robbin shared the warning with the other believers. By evening, the entire congregation had found shelter. They had also visited neighbors in their tent settlements, alerting them to take cover. While some responded, others laughed at the idea of a warning from God. At 8 p.m., the rains and wind began. By morning, the area was flooded and tents ripped apart, but those who’d heeded Robbin’s warning were dry and safe. 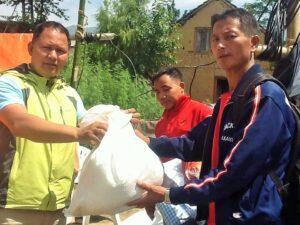 “What a witness this was among non-Christians,” Robbin testifies, “that our God can protect His followers.”

To be a witness of God’s love to their non-Christian neighbors has been the goal of BCM Nepal’s church body since this crisis began. Robbin Vaidhya offers praise to God for one particular modern technological development that has contributed to that goal. Despite intermittent electricity, residual battery in the BCM Nepal computer system allowed contact with the outside world through FaceBook. Robbin expresses BCM Nepal’s heartfelt thankfulness for the outpouring of concern and prayers from the BCM ministry family around the globe that have let them know they are not alone or forgotten. Within days, donations for relief funds began arriving as well from BCM ministry partners and church families.

Aid that the BCM Nepal believers have shared from the beginning with less fortunate neighbors. To date, they have distributed tents, rice and other food items, blankets, and more to hundreds of needy families. In response, they have seen one great blessing emerge from this crisis.

“Before the earthquake, we faced many obstacles and persecution from our neighbors,” Robbin explains. “Now they all show positive feelings about our church because we helped them in a bad situation and showed our love and care for them. Praise God for all this.” 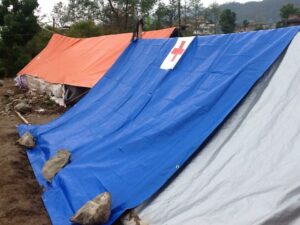 Three weeks after the initial April 26th earthquake, life in Nepal was settling down to a new normal of tent cities, relief organizations, and the beginnings of reconstruction efforts. Then on May 12th, a second major earthquake hit, measuring 7.3 on the Richter scale. This time the death toll topped 8000 with countless more missing and an estimated half million Nepalese families left homeless, making this now the deadliest natural disaster in Nepal’s history.

Both the Nepalese and the BCM Nepal ministry family are facing an uncertain future. Aftershocks continue to shake the ground. To add urgency, Nepal’s monsoon season is approaching with millions currently stranded outdoors without adequate shelter. An inadequate stream of aid is only just beginning to trickle into outlying towns and villages. Reconstruction will be a long, hard process.

But BCM Nepal believers have no reservations as to where to start. Robbin Vaidhya writes on behalf of his church family: “We are facing, of course, great difficulties. We have no idea what to do about ourselves. But one thing we know. We need to be helpful to each other. And we must continue sharing our love with our neighbors.”

In a recent tent service, Robbin preached appropriately on Hebrews 12:25-28, a passage that speaks of God shaking the earth and heavens until only that which cannot be shaken will remain. The final verse (12:28) sums up BCM Nepal’s own commitment regardless what else this crisis may hold for them: “Therefore, since we are receiving a kingdom that cannot be shaken, let us be thankful, and so worship God acceptably with reverence and awe.”

In practical terms, immediate goals for Milestone Church are to erect a more substantial temporary structure made of iron supports and corrugated tin on a nearby field they have been able to rent. Their hope is to have it built before rainy season begins in a few weeks so that it can also be used as sleeping quarters for those still lacking shelter.

A second goal is to help erect temporary living structures for displaced families, also of corrugated tin. In other areas of Nepal, BCM church structures have survived the earthquake, but in one district alone, over 90% of church families have lost their homes. Ongoing needs include food and medical supplies, blankets and warm clothing. The rebuilding of Milestone Church itself is a long-term goal.

“Please do not forget us here in Nepal,” pleads Robbin Vaidhya.

May this be our challenge as new media stories crowd out the ongoing desperation in Nepal. In its earthquake-shaken landscape, God’s church is one constant that remains standing and unshaken. Pray with the BCM Nepal family and the body of Christ across Nepal that in this tragedy they may continue to be a witness of God’s love to their community in need.

To donate to the BCM Nepal Relief and Reconstruction Fund, Click Here. 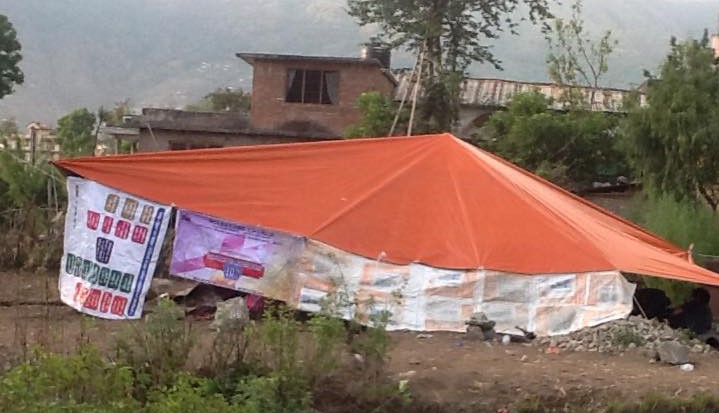