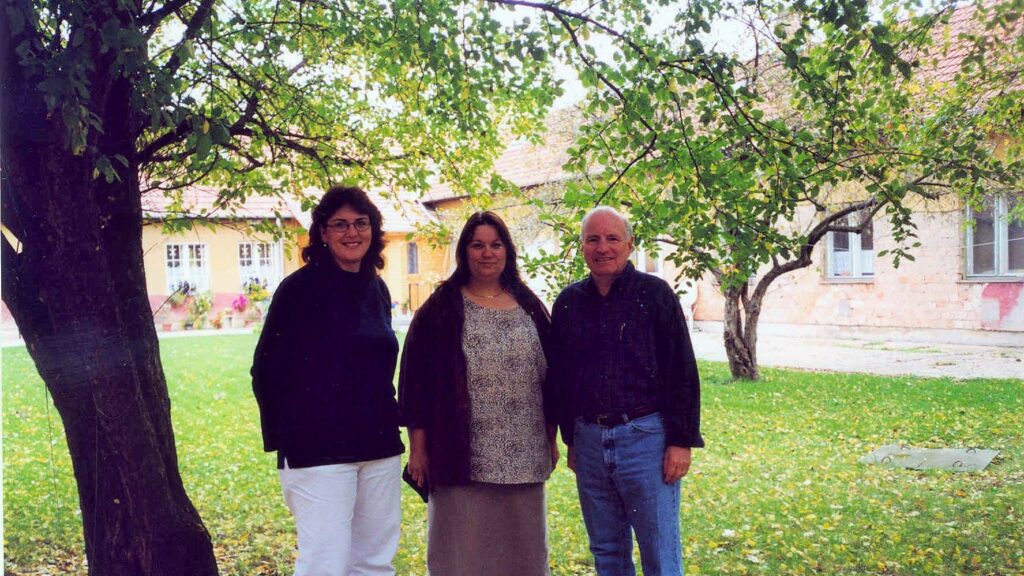 Bob Evens with Damaris and Birgit in front of the center 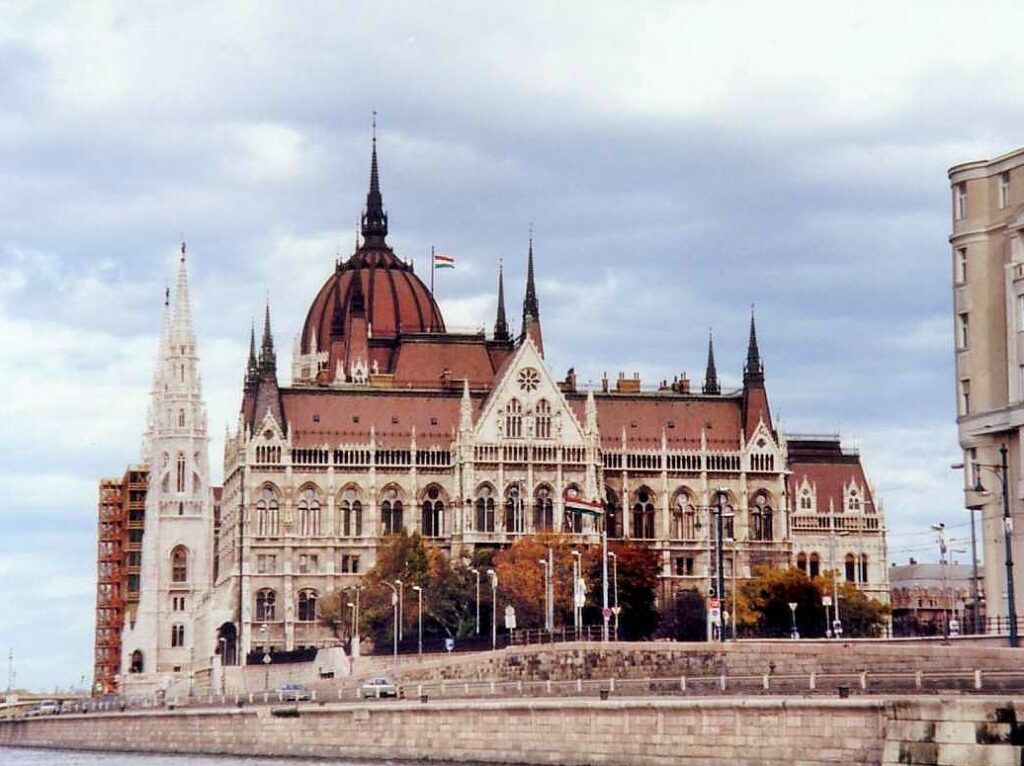 By: Jeanette Windle with Damaris Grauer and Birgit Karsch

“Dear God, bless Hungary. Help the Hungarian people come to know Christ as Savior. Send missionaries to their country to bring them the gospel.”

When Damaris Grauer and Birgit Karsch joined the Eastern Europe missions prayer band at their Bible school in western Germany to pray for Hungary and other Eastern European nations, then just emerging from Communist rule, the last answer to their prayers they expected was for God to call them to full-time ministry in Hungary with BCM International.

“God is funny that way,” smiles Damaris. “You pray for God to meet a need. Then God decides you are the answer to that prayer.”

Damaris and Birgit were unlikely choices for the mission field, above all because both suffered chronic poor health. Damaris grew up in a Christian home, her parents Bible camp leaders. She was 11 years old when she accepted Christ as Savior. Though she struggled with a genetic blood disorder, later on developing lupus as well, she managed to complete nurse’s training and went on to study at Bibelschule Brake (Brake Bible School).

Birgit in contrast knew little of a loving God until her non-believing parents sent her to a Bible club as a child. Through hearing the Bible stories, she “fell in love with Jesus,” as she shares now. Her first severe illness, believed to be leukemia, came at age 14. During her illness, she began searching earnestly for God, reading the Bible even though much of it did not make sense to her. Her symptoms eventually went away, but she continued to seek after God, checking out many different philosophies. Birgit had won a much-contested place in nursing school when a Christian colleague invited her to an evangelistic meeting.

Birgit shares: “God spoke to my heart, and for the first time I understood Christmas and Easter. At that moment I decided that if Christ died for me, then I wanted to live for Him. It was so deep in my heart that I wanted to tell everyone I met.” 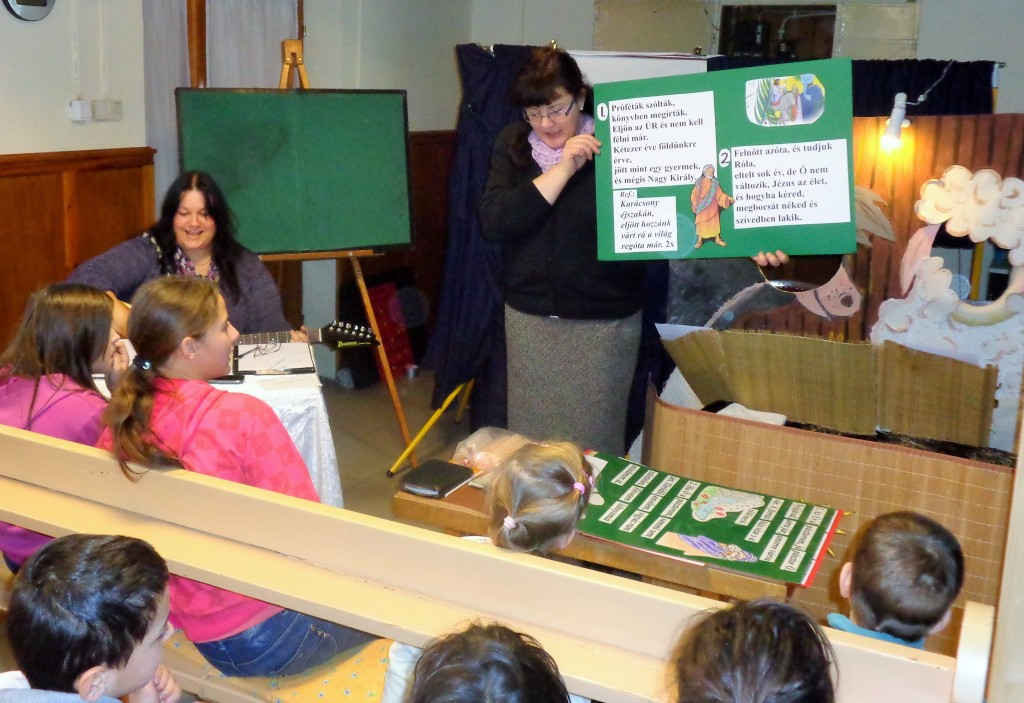 Over the next years, Birgit finished her nurse’s training, but also became involved in children’s ministry. She eventually took a job at an Intensive Care Unit in Mainz, where BCM field director Dale Sigafoos was pastoring BCM Germany’s first church plant. Birgit began attending the Mainz church and there was first introduced to BCM International. Dale also encouraged Birgit in her desire to serve God, even writing a reference letter for Birgit to attend Bible school.

That Bible school was Bibelschule Brake, where Damaris was also attending. Birgit and Damaris ended up in the same class and on the same dorm floor. To this point, Birgit’s earlier health issues had never returned. But by the end of her first year of Bible school, she began experiencing serious neck and back pain. A specialist informed her that two of her vertebrae were out of alignment and that she would likely be paralyzed and in a wheelchair by age thirty. Miraculously, this never happened, though this would remain a constant health battle throughout coming years.

By this time Damaris and Birgit had become good friends, their mutual interest in serving God as well as health struggles forging a close bond. They worked well together in their practical Christian outreach training. A wise faculty counselor encouraged them to consider missionary service together as a ministry team. 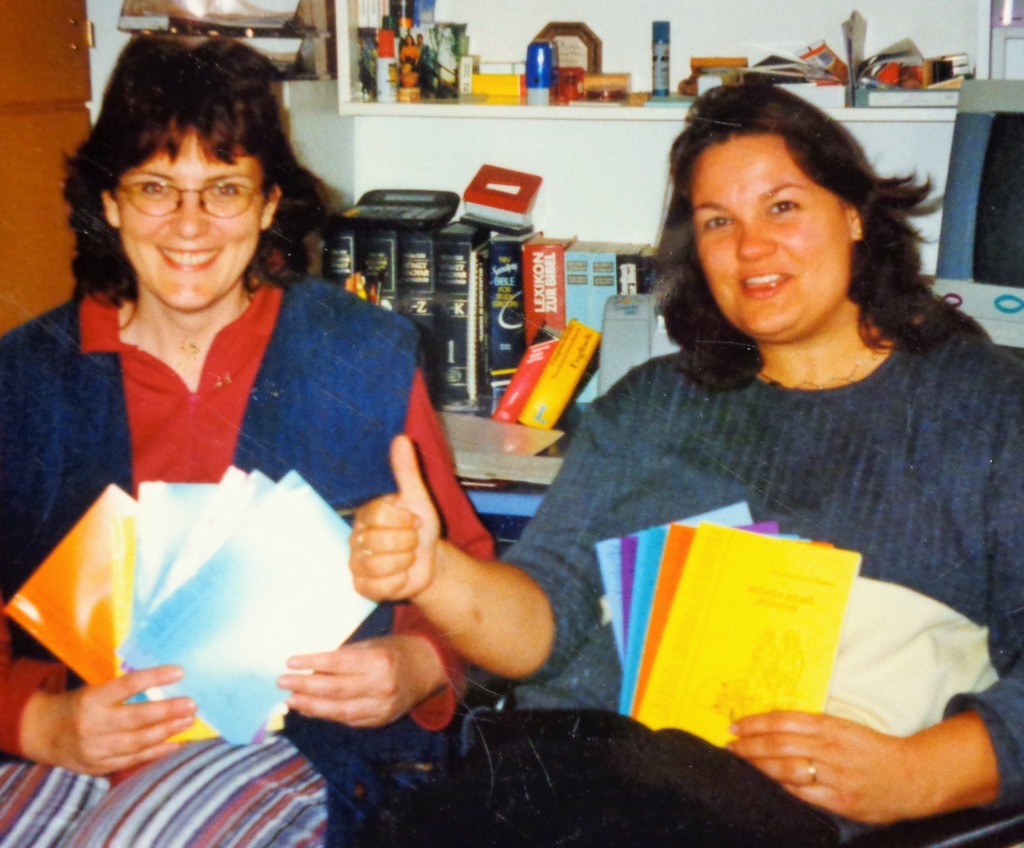 First copies of FOF in Hungarian

After graduation, Damaris and Birgit began investigating possibilities for missionary service. By this time they were both working as nurses in Mainz as well as attending the BCM church there. Many of the mission fields that interested the two young women were not practical with their health limitations. Then they met a German Christian who had grown up in Hungary and was involved in ministry there. He suggested Damaris and Birgit consider Hungary as a mission field. The two young women had never stopped praying for Hungary since their Bible school days. In 1993, they visited Budapest and other Hungarian cities for the first time.

By now the Iron Curtain had fallen, and Hungary was wide open for Christians to obtain visas. But few missionaries had to this point entered the former Soviet bloc nation. Another impelling draw for Damaris and Birgit was that Hungary had a good medical system, which would provide for the two women’s health needs. As Damaris and Birgit began to pray about this opportunity, God brought several other Hungarians across their paths in Mainz. The two women soon had no doubt that God was calling them to Hungary. Their home church in Mainz mobilized behind them, commissioning them in 1994 as missionaries to Hungary under BCM International.

Once they arrived in Hungary, Damaris and Birgit were shocked to discover how few Christians there were. Even more distressing was the lack of Bible training and discipleship even among Christian leaders, the result of seven decades of Communist rule when access to the Bible and Christian study materials was interdicted. Though Hungary was now free of Communist rule, its economy was in shambles and its people struggled with alcoholism and depression. Hungary ranked highest in Eastern Europe for suicides.

The two women found a house in Szeged, Hungary’s third largest city on the southern border near Serbia and Romania. Their first priority was language study, but since both women spoke English as well as German, they began outreach through English classes and a German conversation club. By the end of the first year, they were able to hold their first children’s camp and had begun women’s meetings as well as Bible clubs in various locales.

Seeing the need to reach men as well, Damaris and Birgit began praying for a male co-worker. In 1995, God brought László, a Hungarian national, into the ministry. László had come to Christ while living in Germany and was currently studying German at the university in Szeged. That he could speak their language as well as fluent Hungarian was an added blessing for Damaris and Birgit. The three have now been working together as a team for more than twenty years.

By the end of five years, their rented residence in Szegred was no longer adequate for a ministry center. The team, together with supporters, family and friends, had been praying for a more permanent location to host camps and other ministry events. Then God opened the doors to purchase a large, if run-down, country estate on two hectares of land halfway between the two main cities where BCM Hungary was holding Bible studies and children’s clubs. Both local volunteers and short-term mission teams helped refurbish the property for ministry use. In 1999, the refurbished buildings became Elim Center, headquarters, retreat center, and camp site for BCM Hungary. The center also serves as a Christian guesthouse and hosts a small church.

Among BCM Hungary’s ongoing ministries are children’s and women’s clubs, day camps, evangelistic family days, discipleship, student outreach, and a growing counseling ministry. Elim Center hosts a variety of church and leadership training events. BCM Bible curriculum Footsteps of Faith has also been translated into Hungarian for use in children’s ministries across the country. 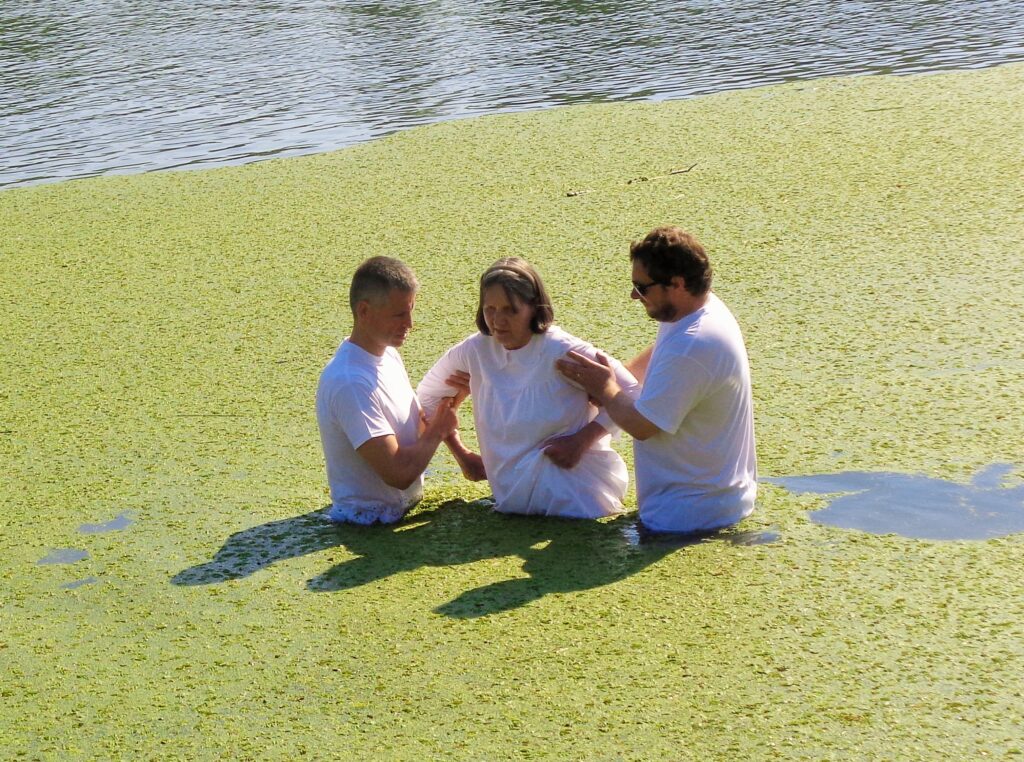 Still, ministry in Hungary remains difficult, church growth slow. Several ministry partners have had to leave due to health and other issues. Damaris and Birgit themselves continue to battle serious health issues. Several times the BCM Hungary ministry has come close to being shut down.

“We’ve experienced everything that happens to frontline soldiers,” expresses Birgit. “At times we feel like Paul and his co-workers in 2 Corinthians 4:8-9 when Paul says, ‘We are hard pressed on every side, but not crushed; perplexed, but not in despair; persecuted, but not abandoned; struck down, but not destroyed.’”

And like the apostle Paul, Damaris and Birgit have refused to give up, trusting that “what we preach is not ourselves, but Jesus Christ as Lord” (2 Corinthians 4:5). Their prayer is for God to raise up both a new generation of missionaries and national Hungarian Christians to carry forward the ministry. Also on their wish list are male counselors to work with men and young boys as well as helpers with practical handyman skills to take over maintenance of Elm Center.

For more information on BCM Hungary and ministry opportunities there, contact BCM Hungary at bcmdabi@gmail.com