PREACHING A RISEN SAVIOR EVEN IN THE MIDST OF BULLETS

John Peter Teaching at the Conference 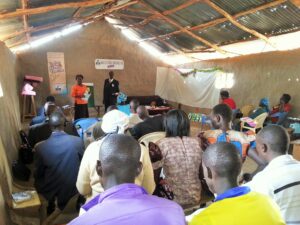 The shooting began before dawn on April 2, 2015. Both Christian and Muslim students at Garissa University in eastern Kenya about 200 kilometers north of the Somali border had risen by 5a.m. to attend pre-class prayer meetings. A half-hour later, gunmen from the Somali-based Islamic militant group Al-Shabaab burst through the gates, killing campus guards and taking more than 700 students captive. The gunmen swept across campus, demanding of students if they were Muslim or Christian. Muslims were permitted to leave. Those who admitted to being Christians were executed on the spot. By the time Kenyan security forces retook control of campus, 147 people were dead, another 79 injured.

Dr. Josphat Yego, BCM missionary in Kenya and director of Developmentia, speaks of the attack:  “We thank God that the Christians were not ashamed of our Lord, but stood firm and said, ‘Yes, we are Christians.’ Most of those shot first were members of the Christian Union attending daily prayers and devotions that started 5.00am. When asked whether they were Muslims or Christians, they boldly identified themselves as Christians even after some students who claimed to be Muslims were allowed to leave and those identifying themselves as Christians were being shot at close range. And so they were killed for standing for Christ. Pray for the parents and relatives of those killed. Pray for us here in Kenya for wisdom on how to counsel [grieving family members] and to be firm in preaching Christ the risen Savior in all seasons even in the midst of the bullets. Let us pray too for our Muslim brothers because Christ died for them too, and we must reach them with the Gospel.”

This was not the first or worst attack Kenyan Christians have faced from Islamic militants in recent years from the US embassy bombing in 1998 that left 200 dead to the Nairobi mall massacre in 2013, attacks on churches in various parts of the country, as well as dozens of smaller-scale bombings and shootings in marketplaces, restaurants, or the open streets.

It was against that background and with regional security on high alert that Rev. John Peter, BCM Africa director, and BCM missionary Rev. Vernon Govender boarded a plane for Kenya just three weeks after the Garissa attack. The reason was an invitation to conduct pastor training in a rural area of western Kenya.

“We were asked so many times, ‘Do you guys think it’s safe to go?’” Rev. John Peters shares. “But we believed this was God’s time for us, so we went. And God was with us all the way.” 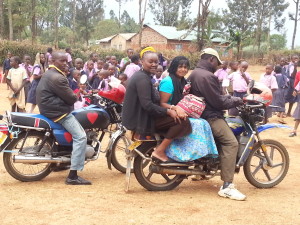 As has often been the case with new BCM ministry opportunities, the invitation to teach pastors in the Eldoret region of western Kenya, came through a prior BCM contact. Master Trainer and BCM South Africa missionary Pat Govender had been in the Kenyan capital of Nairobi in November, 2014, to spearhead an In Step With the Master Trainer children’s ministry trainer event (see ISMT Comes to Kenya, BCM World, Spring 2011). Among the new Kenyan ISMT trainers was Ruth Muthami, a ministry leader with Biblica (formerly the International Bible Society). Together, Pat and Ruth accepted an invitation from another trainee to teach an ISMT event in Eldoret, a regional capital of about 300,000 near the Ugandan border, in February, 2015. More than 70 pastors and children’s ministry leaders attended the ISMT course. It was the first such training event in the region, and the response was enthusiastic.

“We’ve had many pastors and evangelists come and preach,” expressed one local pastor. “But no one has ever come and trained people for children’s ministry.”

The church leadership begged Pat to return to offer additional training to regional pastors. Feeling that male leadership would be better suited to meet that need, Pat passed the invitation instead to BCM Africa director, Rev. John Peter, an experienced conference speaker and Bible teacher.

So on April 24th, 2015, Rev. John Peter along with BCM Africa assistant director Rev. Vernon Govender, arrived in Kenya. The pastors conference was actually scheduled to be held in a town called Matunda, some distance inland from the regional capital of Eldoret. Despite the high security alert, the two BCM ministry leaders found the Kenyan countryside peaceful and beautiful with churches everywhere and complete freedom to preach the Gospel, the Kenyan people themselves warm and friendly.

Still, church leaders warned John and Vernon, “One must always be prepared for a surprise attack.”

No further attacks came during the week Revs. John Peter and Vernon Govender spent in Kenya. About seventy ministry leaders attended the pastors conference. Among topics covered were qualifications of Christian leaders, godly marriage, stewardship, tithing and more. In addition, Revs. John and Vernon spoke at a ladies conference being held the same week and preached in several area churches.

While Revs. John and Vernon found a great dearth of biblical training among many attendees, they also experienced a deep hunger for God’s Word and burden to reach their communities with the Gospel.

“We learned the problems they face are the same as the ones we face in our country,” states Rev. Peters. “Among these are the scourges of HIV/AIDS, poverty and unemployment. In addition, fear of sudden terrorist attacks is always before them.” 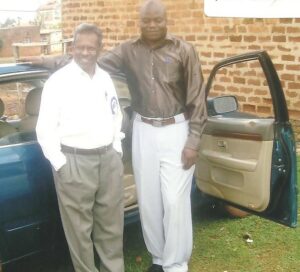 Two attendees especially impacted Revs. John and Vernon. One was a local doctor who took a week off from his own practice to volunteer as their driver during John and Vernon’s time in Kenya. A former Muslim known since his conversion to Christianity as Dr. Leon, he gives a powerful testimony of God’s grace within his community, and his desire to serve God was very evident.

Another highlight was meeting Pastor Geoffry, who was an earlier graduate from Pat Govender’s training courses. He has planted six churches in western Kenya and three more across the border in Kenya and is actively putting Pat’s training into practice, holding ISMT courses that have already prepared many more new children’s ministry leaders in his area.

By the time John Peter and Vernon Govender headed back to the airport on May 1st, church leadership was begging them to stay just one more week. “This training has blessed and empowered our relationship with God . . . it has uplifted us from one step to another . . . it has helped us as pastors to work together . . . we need you again!” were just some of the comments from participants.

Plans are already underway for John and Vernon’s return to hold an expanded pastoral leadership training, not only in Kenya, but across the border in Uganda. BCM Africa director Rev. John Peter sums up, “I can foresee a bright and big future for extension in this region, not just of BCM, but most importantly, for the Kingdom of our Saviour the Lord Jesus and HIS Glory alone.”