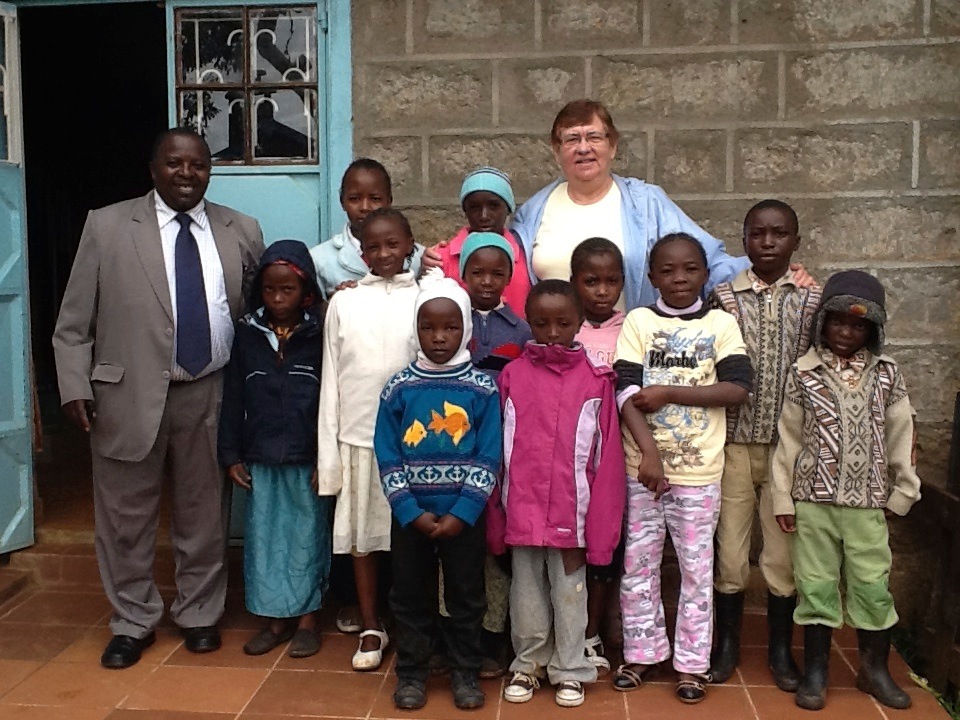 Nairobi, Kenya (BCM World)—Pulling out a teacher’s manual or flipping open a laptop to start up a PowerPoint presentation are common practices these days for teaching a Bible class. But what does one do in a country like Kenya where such resources are not readily available? One BCM missionary Marion Jean Grant has an answer for sharing the Word of God without curricula, visuals, or props. Because ultimately, to teach the Bible one really needs only one teaching aid: the Bible itself!

A BCM missionary to Pakistan for upwards of 20 years, Marion Jean Grant, or “MJ”, is also Associate Director for CBS4Kids. Or in long form, Chronological Bible Storytelling for Children. CBS is a method of Bible teaching that walks children through the entire Bible on their own age level. As the children grow, if they follow this particular chronological system, they will walk through the Bible over and over, but focusing on different stories and different truths about God.

Marion Grant explains just what CBS entails: “Chronological Bible Storying uses 60 basic stories to introduce the Bible and how God put the Bible together. Children come to understand God’s love, His dealing with people and how He wants us to love Him. It also explains salvation, how we can trust Jesus and then walk with Him.”

Teaching Scripture chronologically is not a new concept. In fact, BCM International’s own Sunday School material, “Footsteps of Faith”, is a chronological teaching method. What makes CBS unique, though, is in its simplicity, needing minimal purchased or printed material.

CBS introduces the Bible on a child’s age level, in a clear format, even if the child (or teacher!) has barely any other Bible knowledge. All sixty Bible stories are compiled into one book. These are written in both a bullet-point fashion as well as a storytelling script. In this way, a teacher can tailor the story to their own unique method of storytelling.

MJ herself teaches sixteen different “storying” techniques. These include using objects to tell the story. Handing out pieces of the story to audience members and having them read their script at the appropriate times. Getting children up on stage, frozen in a position that tells part of the story. Each method is unique, captures the audience’s attention (even if the audience is not solely children), and tells the story in a simple, yet poignant way. When a CBS workshop is taught, the majority of the time is spent on teaching these various methods of storytelling. 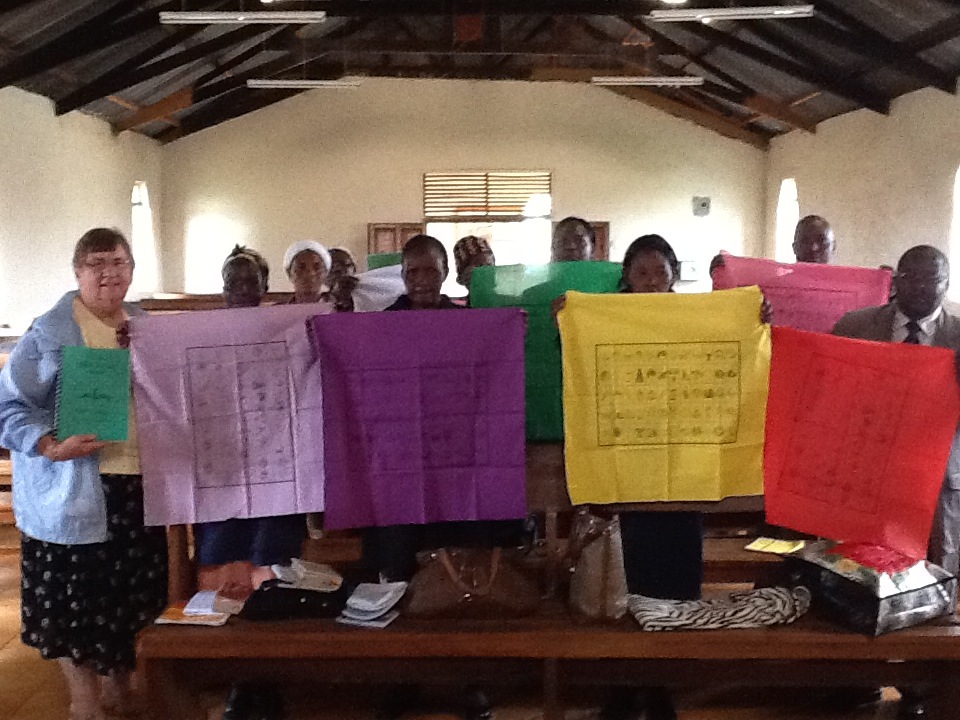 In addition to basic storying, the CBS program also offers as simple visual aid different sizes of “panels”—in essence, banners that are made in a quilt-like format, divided into squares like quilting blocks. Each square has a picture corresponding to a particular Bible story, 60 in total. Banners come in different sizes, some as large as a quilt that could cover a child’s bed, others as small as a bandana. These simple, but beautiful visual aids help keep the children’s attention during each Bible story as well as helping them see where each story fits, quite literally, into the bigger picture. The panel or squares can also be reproduced as individual coloring sheets to help reinforce each lesson.

In October 2013, MJ was invited to Kenya in cooperation with Africa Inland Mission to teach CBS in a variety of workshops and settings over the course of five weeks. Kenya lies just off the Indian Ocean south of Somalia and Ethiopia on the eastern side of Africa. Famous for its safaris and presence of the “Big Five” (lions, giraffes, rhinoceroses, leopards and hippopotamuses), Kenya is also home to Lake Victoria, the world’s largest tropical lake, and Mt. Kilimanjaro, whose year-round snow peaks are visible even across the southern border into Tanzania. Its beautiful beaches play host to international yacht competitions.

But Kenya is also a nation where much of the population lives in extreme poverty. With forty-two percent of Kenya’s population under the age of 15, reaching children with the Gospel is an urgent need. But Bible class curricula and visual aids are not only expensive and difficult to come by, they are simply are not widely available in the country’s national language of Swahili. MJ’s goal was to train children’s workers and pastors how to effectively reach this large demographic with the Gospel in a way that requires little to no visual aids and extraneous purchases.

During her time in Kenya, MJ worked with Africa Inland Mission’s International Children’s Consultant, Carolyn Cummings. Carolyn helped MJ navigate exhaust-filled, crowded streets and cramped city buses. They made their way through muddy, pot-holed streets, dodging traffic, and arrived at a Ghetto Education School. There MJ assisted Carolyn in teaching a preschool Bible class with crafts and she learned a Swahili song.

MJ began her series of workshops on CBS in the Kibera Slum—the biggest and poorest African slum with about one million inhabitants. In a small cement building with a cement backyard, MJ taught two separate groups of neighborhood women the chronological method. Says MJ, “Some did very well at presenting the Gospel story. I was encouraged by the opportunities they had on Sunday to use storying with family and friends. Most of these women are Roman Catholics.” 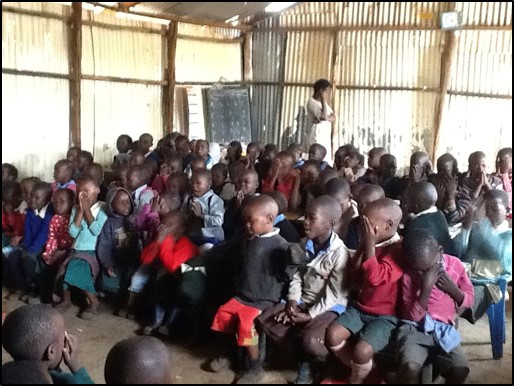 Later in her trip, MJ was able to go back to the Kibera Slum and present a Bible story using this method to two separate schools. At the first school, Hope School, 120 children and five teachers were present during the Bible story. For the second presentation at an Education Centre, 70 children were in attendance.

Over the course of her five weeks in Kenya, MJ taught eight CBS workshops in different regions of the country with about 200 people in attendance. A number of children came with their parents, so MJ used them as her audience as she demonstrated how CBS is conducted.

A typical workshop is interactive and hands-on. MJ demonstrated five of the sixteen storytelling methods. Then the group was divided up so they could practice together. One method she taught is called “Story on a Pole.” MJ describes it: “You put a piece of clothing on the pole to represent the person in the story. I make up scripts of the story. For example, the story of the prodigal son. I used jackets from people in the audience to represent the father and two sons. One person tells the story. Two others hold the pole.”

After practicing, volunteers were chosen to demonstrate to the entire class how to tell the story. Teams worked on facial expressions, specifically in realizing how important one’s face is while telling a story. MJ illustrated how to tell a few simple stories, including telling the Ten Commandments using just one’s hands and using a string trick to teach Psalm 119:11.

Participants included pastors, children’s ministry leaders, short and full-term missionaries. Most were fluent in English, so MJ only had to use a translator once. As they left, students expressed their excitement to put CBS into practice with their children’s classes and to teach others in their churches who were not able to attend the workshops. 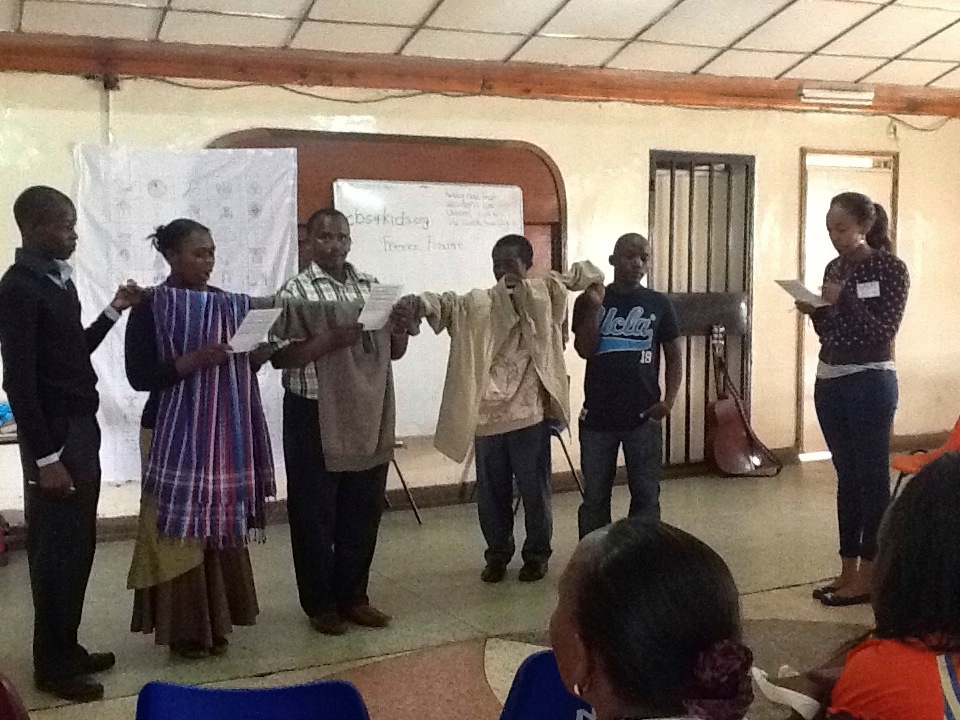 One participating church was especially excited to receive the CBS material. During a Sunday church service with MJ and Carolyn Cummings in attendance, the pastor had the material all dedicated to the glory of God. MJ recalls: “At the end of the service, two chickens were being auctioned off for a special project. The black chicken was given to Carolyn as thanks for speaking in the service that morning. Laughing, I said to Carolyn, ‘I am not holding that live chicken all the way to Nairobi!’”

She’d spoken too soon. A moment later, the brown chicken was offered to Marion as thanks for coming to teach a workshop. MJ insisted she was not going to hold TWO live chickens on her lap in the car back to Nairobi. Instead, MJ remembers with a smile, “The pastor’s family enjoyed a chicken dinner. I enjoyed my two hour drive back to Nairobi without the chickens!”

Chronological Bible Storytelling is, in MJ’s words, “Mushrooming!” News about this innovative method of teaching children continues to spread. MJ has already visited Cuba to teach CBS and has an invitation to do the same in additional African countries. Current plans include follow-up trips to both Cuba and Kenya. MJ also travels to various Canadian Bible Colleges and Seminaries to teach CBS workshops.

MJ sums up: “I like the CBS method because so many of our children are not being taught the Bible in North America and globally.”

With the help of BCM missionary Marion Grant and CBS4Kids, hopefully that will soon change.