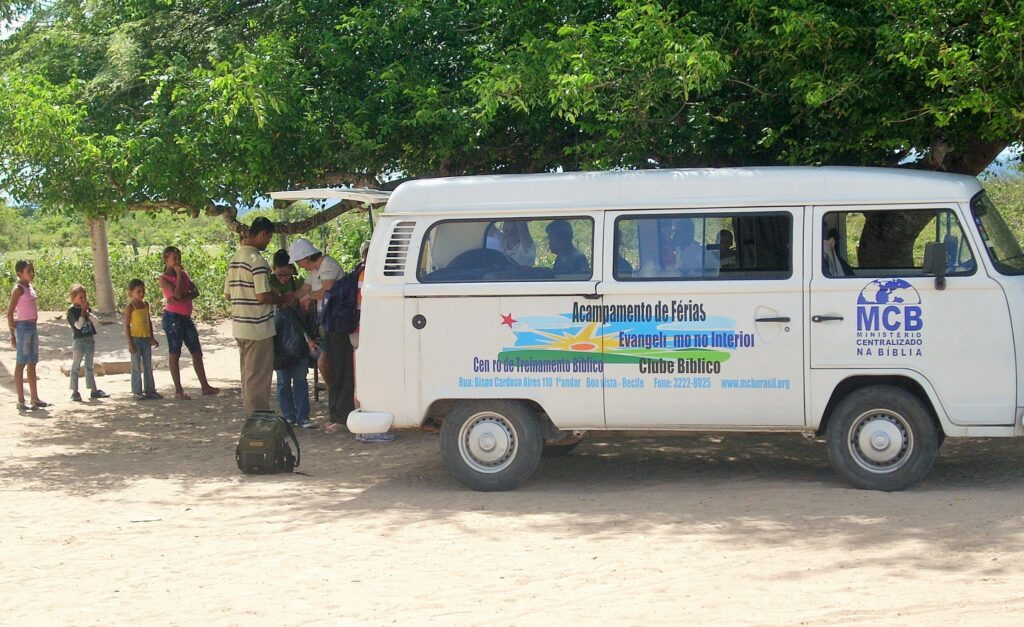 Five hours into an eight hour trip to the desert bush area of Sertão in northwestern Brazil, the van holding a team of BCM Brazil missionaries and American medical personnel broke down. After coaxing the van to a lone gas station in a nearby village, BCM Brazil director Maria Gusmão went looking for help. With less than five hundred population, the village had only one mechanic. After checking the van, the mechanic told the group the van’s clutch was broken, but it couldn’t be replaced until the next day. The ministry team stayed the night in a tiny motel, then had to wait most of the following day until a new clutch arrived from another village.

“During this time, I kept asking myself why this had happened, and what we should do in this situation,” Maria says. “Then Dr. Bill [the American doctor on the trip] gave us the idea of going to visit some houses and sharing the Gospel. The first we went to was the house of a gentleman who had helped me find the mechanic the night before. After we shared, the whole family accepted Jesus as Savior. Afterward, we went to the mechanic’s parents’ house. Dr. Bill always brings along medicine in case people need it. The lady from the first house brought a friend to this next house to see the doctor. Her friend ended up accepting Jesus also. Could this be why the van broke down in this place and this was what God had in mind all along?”

For the past ten years, sometimes twice per year, the BCM Brazil team takes a break from leading camps and teaching Bible clubs in their home base of Recife, a city of about 1.5 million in northeastern Brazil, to head out into one of that country’s poorest sectors for a medical missions trip. Specifically the Sertão in Paraiba State north of Recife. Sertão translated literally into English means “backwoods” or “bush”. The terrain is similar to Canadian back country or the Australian bush—barren and desert-like, covered in caatingas, or scrubby, upland forests. The residents are very poor and villages quite small. 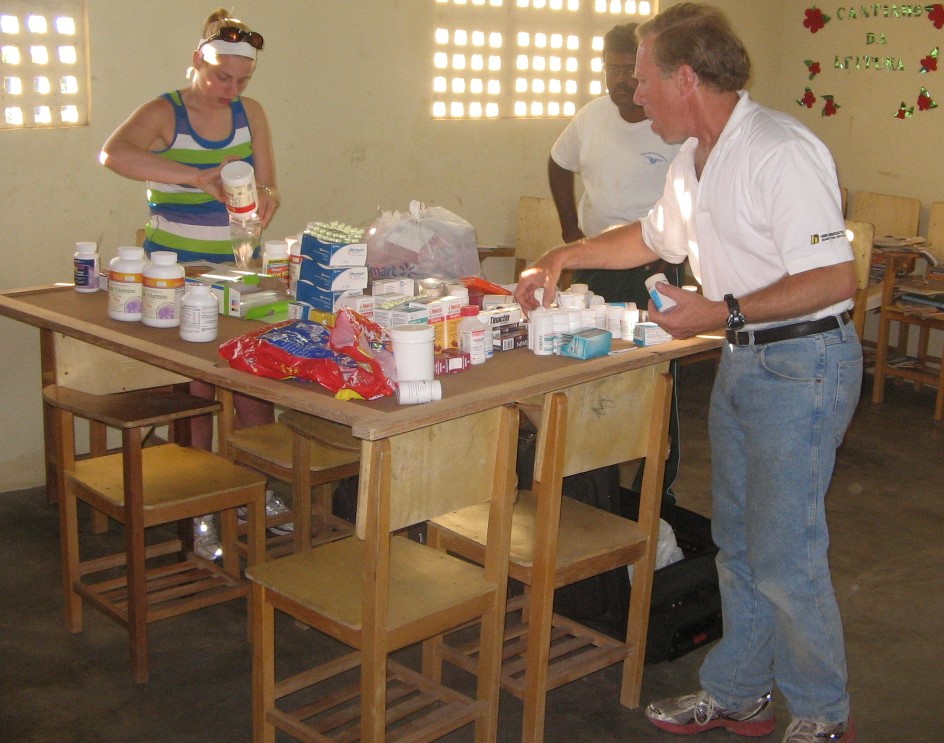 Seven BCM missionaries are always joined by a few Christian American doctors and nurses from Pennsylvania, USA. The mission team partners ahead of time with local churches in each region of Paraiba State to which they travel. At each church, the team invites locals with health needs to be seen by the visiting American medical team. Before beginning each day, the BCM Brazil missionaries gather together those who’ve come to the clinic to share with them the Gospel of Jesus Christ. The medical personnel share more with each individual during their examination and treatment while simultaneously the BCM Brazil missionaries talk with those waiting their turn. During this last trip in May, 2015, the first night the team finally reached their destination, the doctors treated forty-nine people and thirty-one received Jesus Christ as Savior.

Due to their remote location, and financial limitations, the Sertão churches receive little outside help beyond the occasional visits from the BCM Brazil mission teams. In appreciation for all the doctors and missionaries do, the churches provide what they are able by way of lodging and food. The BCM team is grateful for even a simple mattress on the floor, as they know the church is giving them the best they have to offer. As time permits, the mission team also offers courses for local church leaders such as ministry to children and how to evangelize. The BCM Brazil missionaries do not just want to reach these communities with the Gospel, but to better prepare the churches in that area to do the same.

Maria tells how during one trip, the team had a very poor attendance at an afternoon clinic. They were holding the clinic in a school, but only one class was being held at the same time. Maria says, “I went to pray and asked the Lord what He wanted us to do. The Lord said to go to that class and preach the Gospel to those teens.” It was an English class, so Maria utilized the American medical personnel. One doctor, Dr. Beck Soderberg, shared his testimony in English. When Maria then challenged the teens to give their lives to Christ, many did!

During another recent mission trip, the medical team was able to enter a Gypsy village for the first time. Gypsies have lived in Brazil for a couple hundred years, but the immigrant population grew substantially after World War One. Now there are thousands scattered throughout Brazil, though the exact number is not known. Most have given up their traditionally nomadic lifestyle, but still live simple lives. The majority do not finish their high school education, so they experience a high rate of illiteracy, exacerbated by the fact that Gypsy dialects have no written form. Even in Brazil, the Gypsy population holds to their historic cultural practices such as marriage at age 13, palm reading and other forms of fortune telling. Most Brazilian Gypsies remain unreached with the Gospel of Christ. 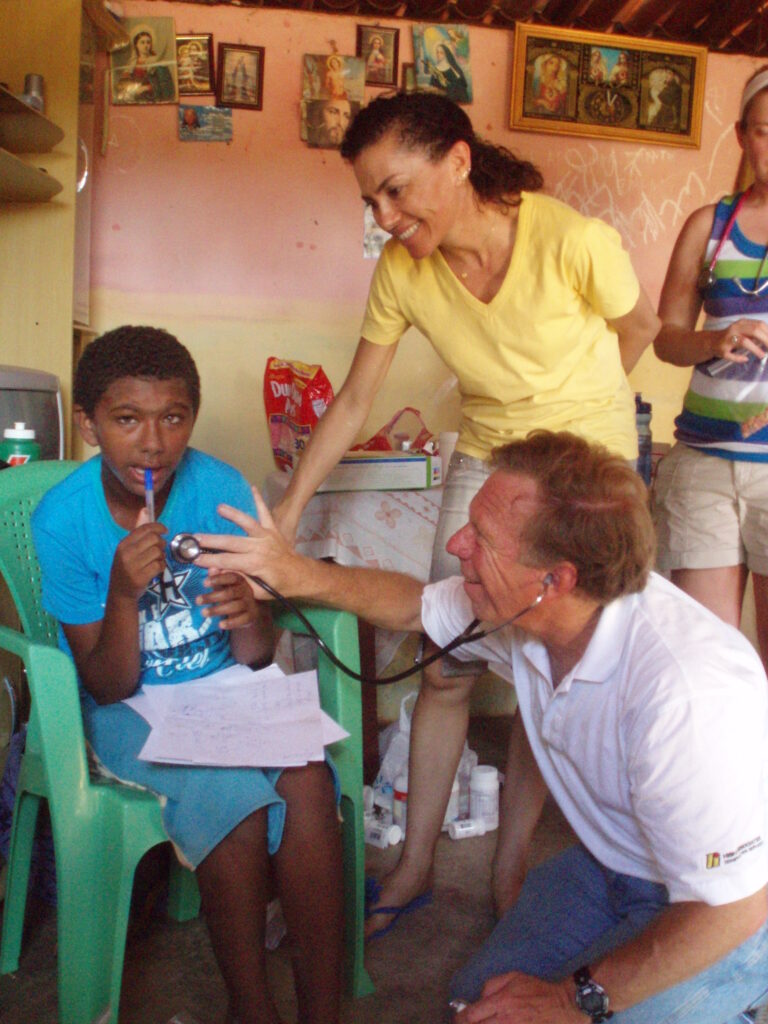 Maria remembers, “We felt the darkness around the place where the Gypsies lived. One Gypsy lady brought her kids to see the doctor and ended up giving her life to Jesus. She has seven kids and lives in extreme poverty. Others received the Lord as well. We have reports that from those Gypsies who accepted Christ, about twenty are now attending Bible study.”

Reaching the Gypsy people with the love of the Lord is no easy task. The BCM Brazil missionaries were excited to have this new open door. They are praying that they may continue to reach this Gypsy community during upcoming trips.

Brazilians across the Sertão indeed seem to be merely waiting for someone to come and share the hope of Christ with them. Maria Gusmao sums up, “On this last trip, we had 167 people who came to see the doctor. Of that number, 106 adults gave their lives to Jesus. Fifty-five children also heard the gospel, and thirty-four made a decision for Jesus. Some of the people who came and heard the Gospel had already been touched by the Holy Spirit. Things went so easy that sometimes I had to ask more than once if they really understood and really wanted to give their lives to Jesus. We are so used to people saying ‘no’ to God that it’s hard to believe some people are just waiting for someone to preach the Gospel to them!”

Marie tells of one woman who came to the clinic right at the end of the day. It was late enough the team had already begun to turn people away. But they agreed to go ahead and see this woman. Immediately after hearing the Gospel presentation, she gave her life to Christ.

“It reminded me of Romans 10:14, which asks the question: ‘And how shall they believe in Him of whom they have not heard?’” recalls Maria. “God just wants us to preach, and He will work in people´s lives. This became so real to us on this trip.”

Pray for Maria Gusmao and her team as they plan for future missions trips into Brazil’s outback bush country. Pray that God will continue to prepare the hearts of the people living across the Sertão so they may come to know Him soon.