“PLEASE COME BACK AGAIN, AND WE ARE WAITING!” 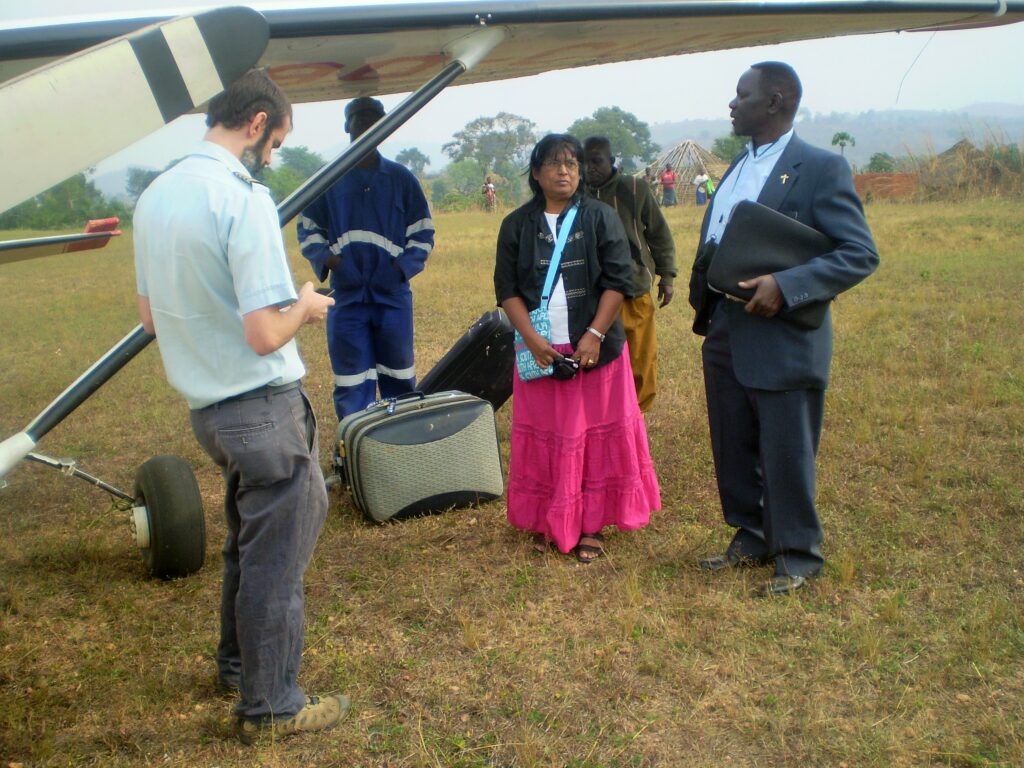 The celebration? A traditional welcome for visitors bringing good news to the village. In this case, that BCM had returned to the Congo!

Bible Centered Ministries International (then the Bible Club Movement) has had a rich past history of ministry in the Democratic Republic of Congo, Africa’s second largest country straddling the equatorial center of Africa. By the 1960s, BCM children’s curriculum was being used for religion classes in both Christian and public DRC schools. In 1970 BCM missionary Margery Livingston arrived in the DRC in partnership with Africa Inland Mission (AIM) to teach Bible in the public school system and introduce Bible clubs within AIM churches. Footsteps of Faith lessons were translated into French, Bangala, Lingala, Swahili. 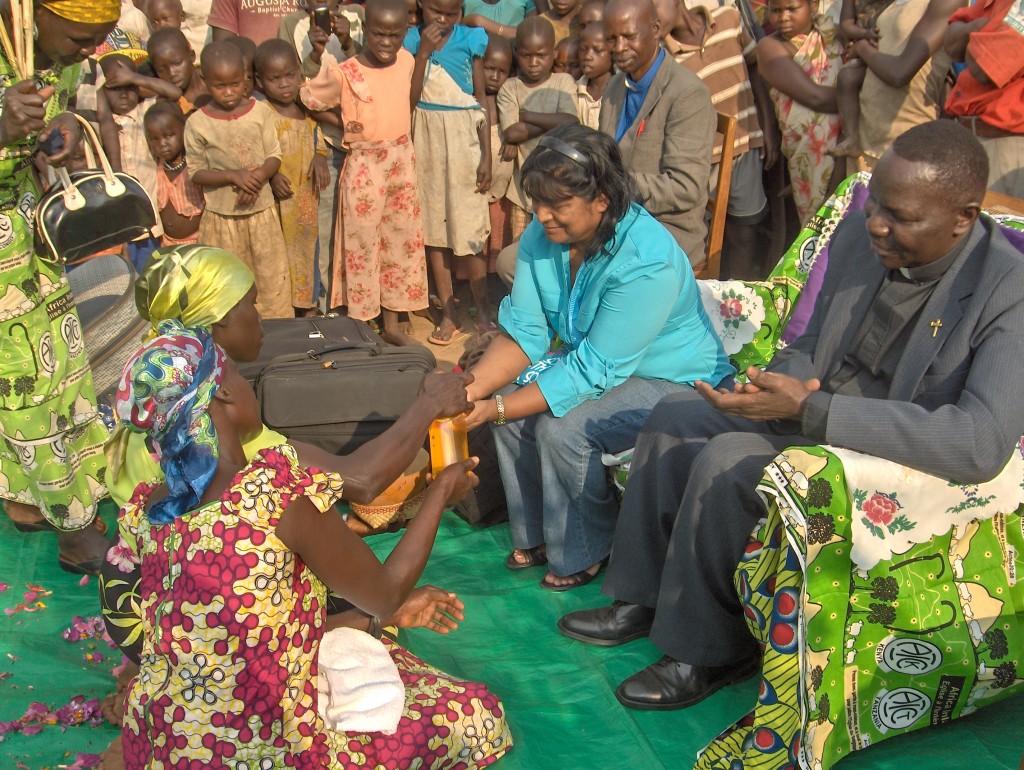 Margery was joined later by BCM colleagues Longboyo Anyamvoko, Lois Pellegrin and Beryl Shannon. The Bible club ministry spread to other regions and church/mission organizations across northeast DRC. In 1975 the government prohibited teaching Bible in public schools. During following decades, the Congolese people endured recurring wars, rebel uprisings, resultant poverty, famine and constant instability. But churches also sprang up throughout the region, along with Bible clubs and other children’s ministry.

Then in 1991 war broke out in earnest. All missionaries were evacuated from the region. Within a short time, all BCM translated material had been destroyed. Children’s ministry leaders continued teaching with a few rescued old lesson books. By 2000, Congolese church leaders had contacted Margery Livingston (current married name Dickinson), now retired in the US, pleading for materials. Over the next decade, several donation projects made possible new printings of curriculum in Swahili and Bangala, though distribution in the war zones proved difficult (see Footsteps of Faith in War-torn Congo, BCM World, Spring 2009).

By this time Congolese nationals Dr. Djawotho and Asinata Kisa were serving as missionaries with BCM International. Djawotho had grown up the son of AIM evangelists in northeast DRC. He was pursuing a university degree in business when he accepted God’s call to ministry in 1974. After studying theology in Paris, France, Djawotho and his wife Asinata returned to Bunia, northeast DRC’s largest city. While Djawotho pastored a church and conducted evangelistic outreach in surrounding towns and villages, Asinata headed up women’s ministries in Bunia.

Then in 1986, the Kisa family traveled to Philadelphia, PA, in the United States for Djawotho to pursue a doctoral degree. Their plans were to return to ministry in Bunia once studies were completed. But by that time, war was ravaging Bunia, the missionaries evacuated, local churches engulfed in turmoil, making it too dangerous to return, especially since by now the Kisa family included four sons and a daughter. As the Kisas began praying about a ministry within the USA, contacts through Margery Livingston and other BCM missionaries led them to apply to BCM.

Appointed BCM missionaries in 1993, the Kisus ministered in children’s ministries in both New Jersey and Philadelphia area. But the situation in the DRC was never far from their heart. In 2003 Asinata traveled to DRC’s capital city, Kinshasa, in the far west of the country, to conduct a Christian leadership training conference. In 2005 Asinata returned with BCM Philadelphia missionaries Loraine Stirneman and Christine Wigden. More than 150 leaders from 50 denominations attended the training. 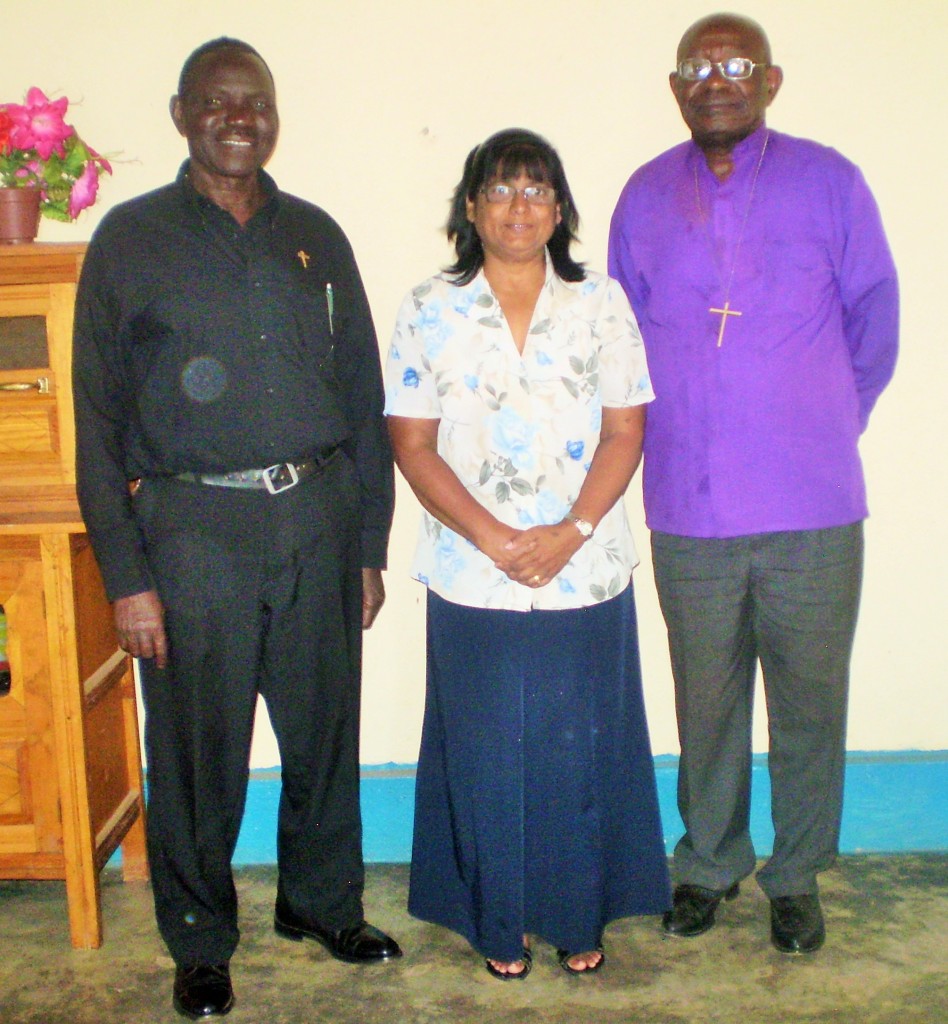 Then in 2010, Dr. Djawotho returned to Bunia and nearby Aungba to visit family. Wherever he traveled, he took time to visit churches and evaluate the state of children’s ministries and teaching materials. Everywhere he found Sunday school and other children and youth programs closed down. Due to the region’s population explosion, children and youth far outnumbered adults in the churches, but little teaching was directed at them beyond sitting with the adults in church services. With no programs addressing their needs, Christian youth were abandoning the church once they reached their teens. Even worse, pastors and teachers were burnt out with their communities’ overwhelming physical, social, spiritual needs and displayed neither interest nor vision for children and youth outreach.

“This specific need broke my heart,” shares Dr. Kisa. Returning to the USA, Djawotho proposed a revival of BCM’s mission to train up children’s ministry leadership in the DRC. In 2011, Djawotho and Asinata resigned from BCM USA ministry to become full-time members of BCM in Africa.

But Djawotho’s vision went far beyond reestablishing children’s ministry in Bunia and surrounding regions. The desperate need for trained children’s ministry leaders extended throughout all Congolese church denominations. On behalf of BCM, Dr. Kisa was appointed to make contact with Bishop Marini Bodho, president of the CCC (Church of Christ in Congo), the umbrella organization of more than sixty Protestant denominations across the DRC. In January, 2014, BCM president Dr. Martin Windle flew to Kinshasa to meet with Bishop Marini and other CCC leaders (Djawotho was scheduled to travel with him, but flight was cancelled due to snow storms). From that meeting came an invitation for BCM to partner with church denominations across the DRC in training Sunday school and Bible class teachers using BCM’s children’s ministry curriculum In Step With the Master Teacher.

Just a month later, Dr. Kisa and Mrs. Pat Govender, a BCM missionary from South Africa, arrived in Bunia to begin the first round of training seminars. Pat had grown up in a Hindu home and was led to Christ by the man who became her husband, Dave Govender, already a convert from Hinduism. Pat served in children’s and youth ministry for 19 years with Scripture Union. In 2009, Pat graduated from BCM’s Train The Trainer (TTT) program in Johannesburg, SA. In 2010 she received the added certification as a Master Trainer in the Netherlands and was appointed coordinator of BCM Africa’s Children’s Worker Training Program. Since then she has taught ISMT seminars from South Africa to Nigeria and as far afield as Sri Lanka and Ireland. 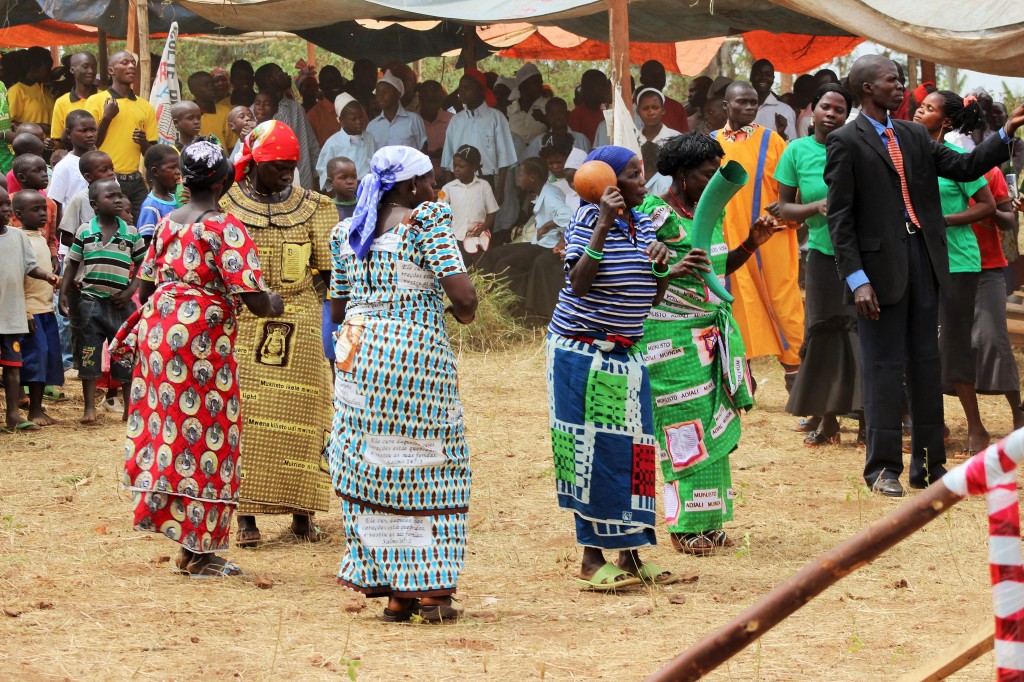 The site for the team’s first training seminar, Aungba, had once been a mission station where missionaries built schools, a hospital and clinic, evangelizing and planting churches in surrounding villages. Evacuated due to the armed conflict, Aungba had not been visited by missionaries in a decade. Surviving church congregations struggled with extreme poverty, growing their food on small farm plots, selling what they could spare for cash necessities like school fees and clothing. Their reception of Dr. Kisa and Pat Govender was jubilant.

15 leaders from three regions—Aungba, Kisangani, Blue Mountains (Bunia)—arrived for the training conference February 17-19. An outreach event into a local school allowed participants to put lessons immediately into practice with more than 600 children. By end of the training, leaders were excited to return to their own regions and replicate the training among their own churches. A special bonus was a gift from BCM of Footsteps of Faith curriculum in Lingala, Swahili and French to be distributed among the churches.

Dr. Kisa and Pat Govender then traveled more than 600 kilometers south of Bunia to Goma, a city edging Lake Kivu on the DRC/Rwanda border. The city had been hit hard by years of guerrilla fighting and a volcanic eruption that a decade earlier had buried 40% of the city in lava. Jolting over roads so full of pot-holes a local nickname is “dancing roads”, Dr. Kisa and Pat found much of the city still devastated with a poverty even worse than Aungba. Among the challenges were security issues that required shutting down training mid-afternoon, transport difficulties that caused students to arrive tardy, scant provisions to feed participants. Pat found herself the only woman at the large Catholic seminary complex where they were lodged.

“I was very scared and even asked if they could move me to where two nuns lived,” Pat shared later. “They said that it was even more inconvenient for me to stay there, so I just prayed harder and went to bed.” 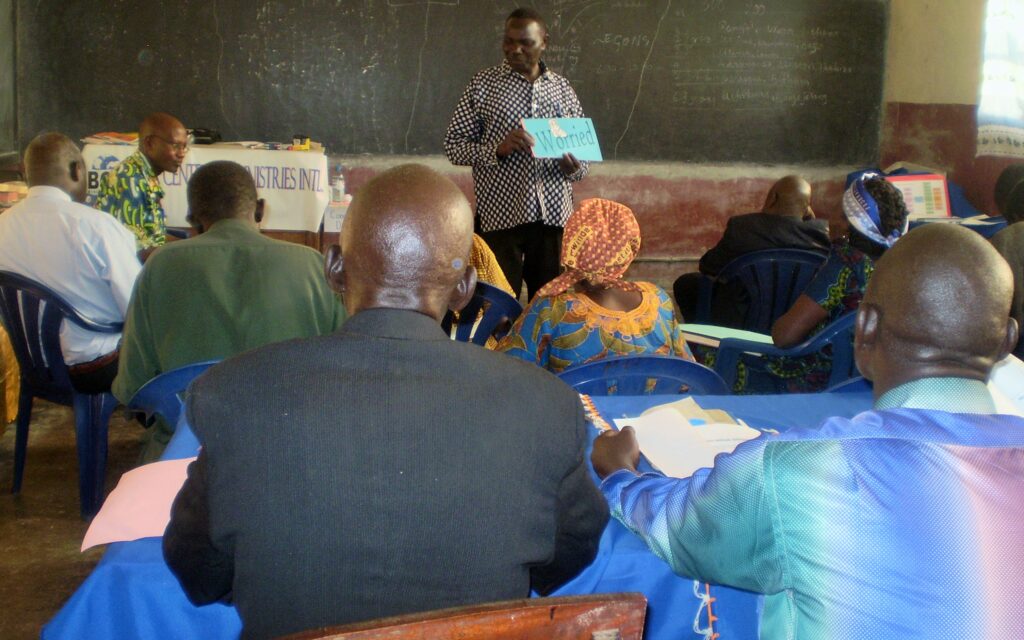 But 46 church leaders arrived to participate in the ISMT training course February 25-28, with 40 receiving certificates for completing the training. 13 students continued on with additional Train The Trainer (TTT) classes. Many more applied for training than available teaching materials, room, or even food made possible. The repeated plea Dr. Kisa and Pat Govender heard from Aungba to Bunia to Goma became the slogan of their time in the DRC: “Please Come Back Again, and We Are Waiting!”

That is just what both BCM missionaries have in mind. Pat Govender shares, “I know we have just come back, but I feel strongly in my heart that we need to make another trip as soon as possible, to grab this opportunity while it is gaining momentum. They are now training others with the little they have. Our goal is to see at least a few trainers being trained well for each church denomination within the next two years.”

“Our ultimate goal, which is our vision too,” adds Dr. Djawotho Kisa, “is that all Congolese churches be given the opportunity to reach children for Jesus Christ.”

Already one church group has written that they have begun implementing the ISMT training for Sunday school teachers across the 29 parishes of their denomination. A pastor shared how he was showing his family what he’d learned in the training when a Christian neighbor stopped by to watch. She begged him to come share the training with teachers of their own church denomination and pledged herself to find necessary funds to set up the training.

Dr. Kisa and Pat Govender have both committed to return soon to the DRC, if possible with additional team members. But a follow-up trip requires both stability and funds. They share their own urgent request for prayer: “Pray for God’s perfect timing for the next trip. Due to all the trouble that has been happening there, we don’t know what the future holds for the people in Congo. We need to know when God wants to go and not rely on our own wisdom. Then we do have to pray for funding for these trips.”

BCM remains pledged to heed the plea of the Congolese church: “PLEASE COME BACK AGAIN, AND WE ARE WAITING!”

If you would like to be a part of BCM’s mission in the Democratic Republic of Congo, donations can be made HERE.