Raising Up NEXT-GEN Leaders in Poland

By John Abramovich with Jeanette Windle

How to find godly, committed counselors and staff for the next generation of camp ministry? Simple for BCM Poland missionaries John and Dasia Abramovich. You raise them.

BCM International partners in Poland with a children’s ministry organization, Miłość Edukacja Dojrzałość (English translation: Love, Education, Maturity, or MED). Dasia has served with MED since its founding in 1990, just months after the fall of communism. She currently oversees MED’s ten Polish workers while John heads up other BCM ministries there (see To Poland With Love, BCM World, Summer 2010).

An integral part of their ministry are the annual summer camps, which reach campers from a gamut of age groups and backgrounds. This summer saw a total of six camps held between June 30-August 6, 2016. Three camps ministered to children ages 8-12. Two teen camps offered English immersion and rock climbing courses. The sixth camp ministers to mentally handicapped young people, the only such Christian camp in Poland.

All of which requires a sizeable roster of volunteers willing to sacrifice vacation days, hard work, a good night’s sleep, while demonstrating God’s love to large groups of active, energetic, and occasionally unruly children and adolescents. Finding adequate camp staff has been a challenge since MED’s first children’s camp in 1994. But this year John and Dasia have noted an exciting pattern. A growing percentage of camp staff have themselves come up through the ranks as campers. Half the counselors at this year’s climbing camp and three-fourths of those at English camp were prior campers with up to 60% at other camps as well. 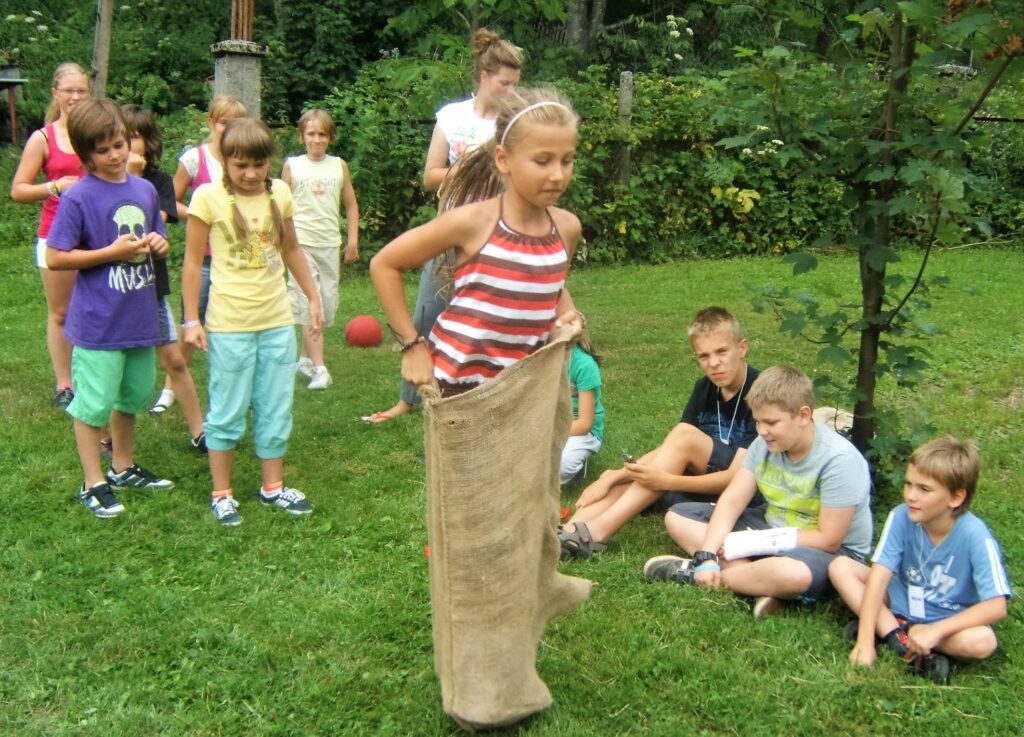 MED sponsored three children’s camps this summer with a total of 117 campers in attendance. MED does not have its own camp facilities.  During the communist era, summer camps and retreats were routinely held in public school buildings, and some of those schools still host groups during the summer, MED children’s camps among them.  Classroom chairs and desks are replaced with beds, while the bathrooms have limited, but adequate shower facilities.

This summer’s Bible teaching program for children covered “Trees of the Bible”, including such as the Tree of Life and Tree of Knowledge of Good and Evil. Campers also enjoyed group games, sport activities, walks in the local area, and a trip to the swimming pool (or the beach at the northern camp).

While a majority of campers come from Christian/church families, many come from non-Christian families as well. Each year these include children from orphanages and other government social services, an indication of MED’s top reputation with the government education ministry that oversees all summer camp programs in Poland. Government programs cover half of costs for these campers while MED scholarships cover the remainder.

This year ten children accepted Christ as Savior. Nor does MED ministry with them end when camp does. Dasia Abramovich spearheads a follow-up outreach with campers, including inviting children to take part in a Bible correspondence course.

John Abramovich shares about one such camper: “Last year one girl at our children’s camp trusted Jesus Christ for her salvation. She went home to a non-Christian family. There was no discipleship and no growth. This year she came again to camp, where she excelled in her Christian growth. Another girl from her area trusted Christ at the same camp this summer. When they went home, they both contacted a lady who leads a Bible Club for children and expressed their desire to attend her (evangelical) church. Praise God!” 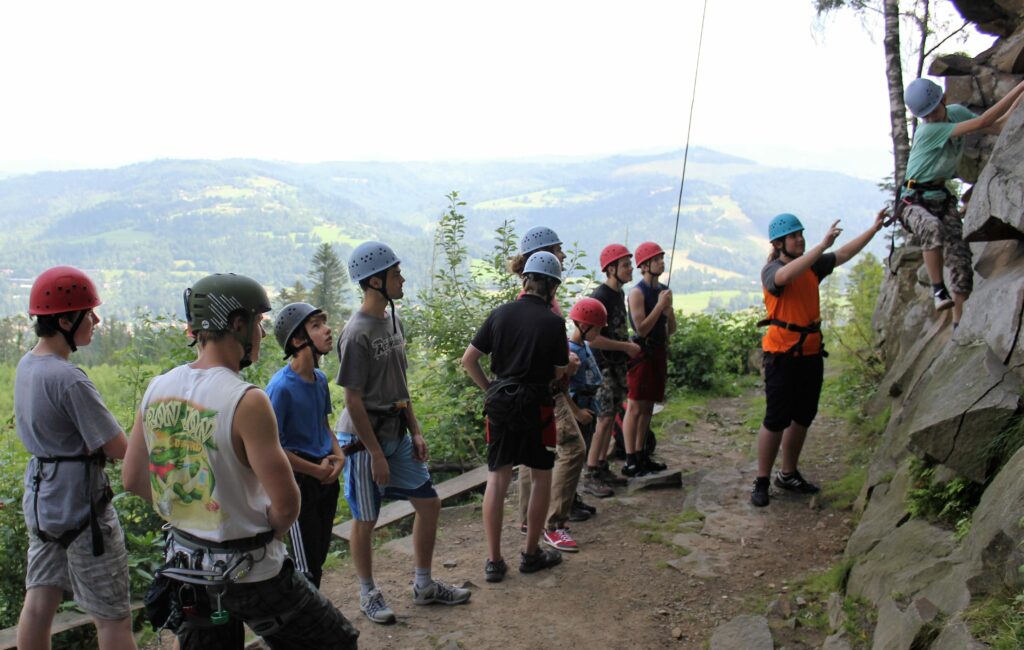 MED’s teen climbing camp began in 2001 with the help of the Abernathy Trust in Scotland, which is a member of Christian Camping International. Since then, the Abernathy Trust has sent climbing instructors to Poland each summer. This summer’s camp was housed in a hotel near a 50-foot rock outcrop at the top of a local foothill. The outcrop offers climbing for different skill levels, and the surrounding foothills have many hiking trails. This summer’s forty campers also enjoyed other sport activities, games, and arts and crafts.

But the week wasn’t just about climbing activities. Along with helping lead the worship music, John Abramovich taught key Christian doctrines, relating them to mountains mentioned in Scripture that provided the historical setting for the doctrines. Campers also learned about persecuted Christians from the director of Open Doors ministries in Poland. For one activity, the teens made cards for mailing to refugee Christians to let them know that they and other Polish Christians were praying for them. By the end of climbing camp, at least three campers had accepted Christ as Savior. 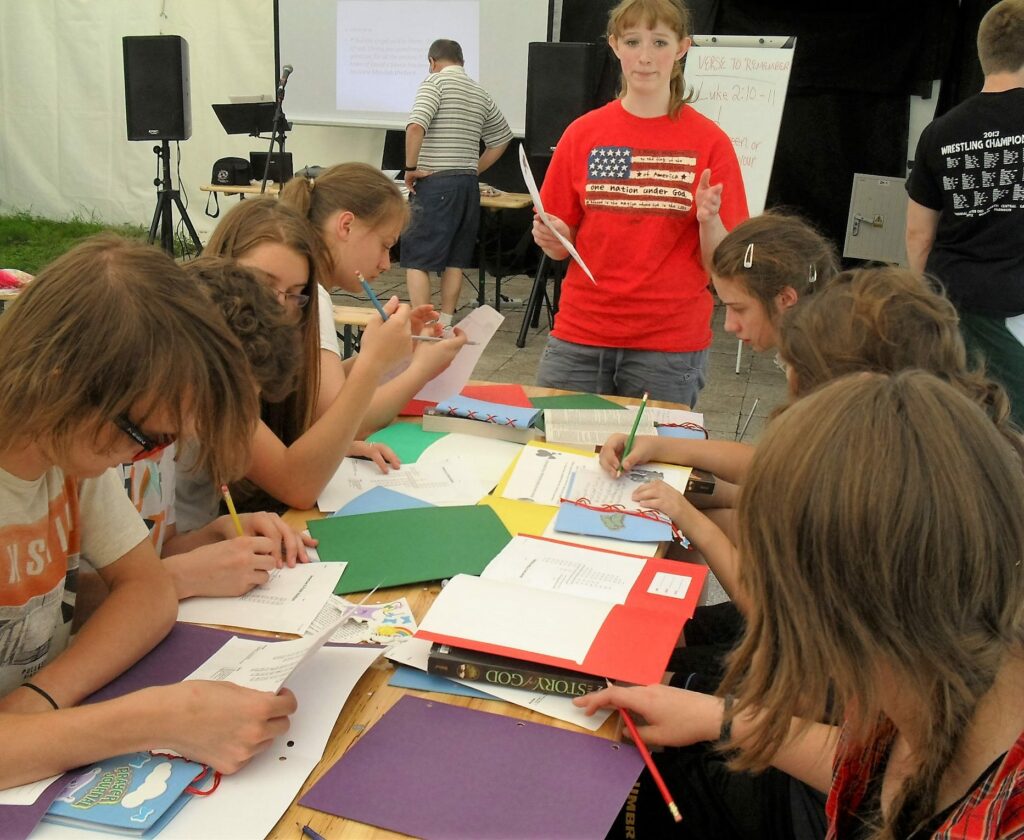 MED’s annual English camp was birthed in 2007 for teens who wanted to attend a Christian camp, but with less strenuous physical activity than the climbing camp. This summer a team of American English instructors joined local Polish staff to minister to thirty-four Polish campers along with 13 teens and 6 adults who joined them from Belarus.

This year’s Bible teacher was an evangelist from England, while John Abramovich helped with worship music and led devotions for camp staff from the book of Isaiah. Along with English immersion classes, campers played whiffle ball, softball, basketball, volleyball, soccer, and other sports. A talent night, trip to the local water park, arts and crafts, and a kielbasa roast over a camp fire rounded off the week.

The Belarus participation was both a blessing and challenge. Their language is a variant of Russian, while American instructors spoke only English, so the entire week became a round-robin of translation between Polish, English, and Russian. The cooperation with Belarus began eighteen years ago with their first visit to an MED camp. One of the Belarusians who attended then was an orphan. Since then he gave his life to Jesus Christ and eventually established a non-profit organization for training Belarus Christians to mentor orphans and prepare them for life beyond the orphanage, including getting a university education.

John Abramovich elaborates: “Since that first camp, Belarusians have attended other MED camps for teenagers in Poland. MED also sends their workers to the church in Belarus to do teacher training for Sunday School teachers and youth workers. We [John and Dasia] thank God for how He multiples the blessings of our camp ministry.”

Which highlights camp’s true importance, which isn’t climbing, English, or other fun activities, but its spiritual impact. During this summer’s English camp alone, some thirty teenagers expressed some type of renewed commitment in their spiritual life, and at least one teenager took her first step in trusting Jesus Christ for her salvation and eternal life. 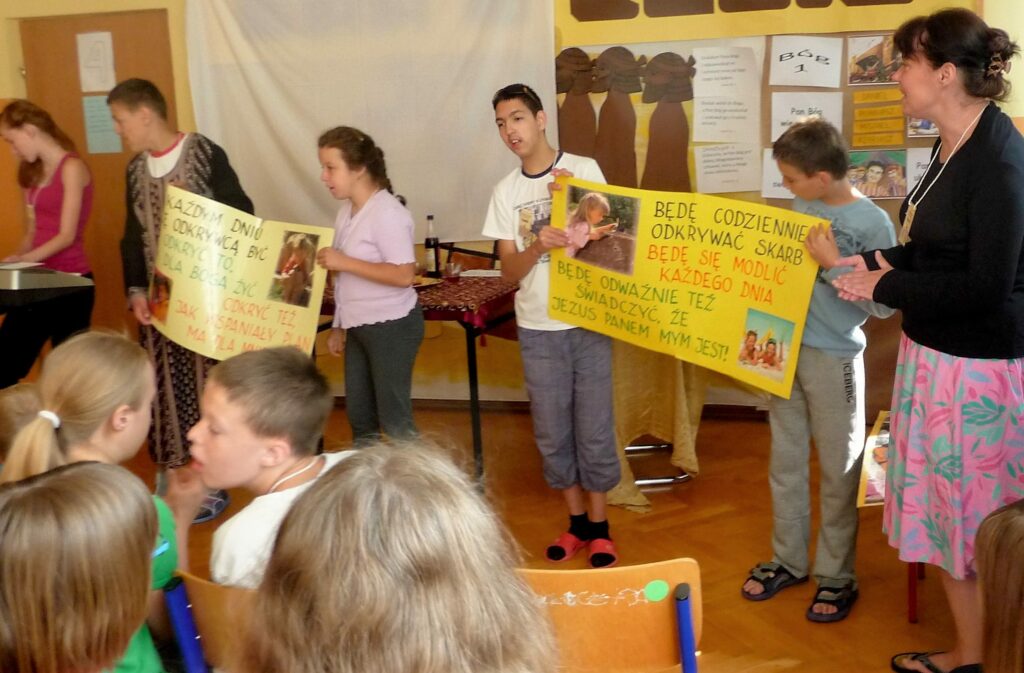 MED held its first camp for mentally handicapped young people in 2004, made possible in part by previous training through BCM’s Handi-Camp program. Directed by Dasia Abramovich, this year’s camp was held in the same school building as the two southern children’s camps with a total of 23 campers. Campers enjoyed Bible lessons, Christian songs, arts and crafts, games, and sport activities. Varying mental disabilities make it a challenge to keep campers focused on an activity, and each camper needs round the clock supervision. Once again, former MED campers have stepped up to the challenge.

John Abramovich shares, “This year at camp, we saw tall, young men taking care of and playing with the handicapped campers. A few years ago they were little campers at our camps for children. One of these young men remarked, ‘I am paying back my debt. For many years I came to your camp, and now I can help others!’”

Which comes back to the ultimate purpose of BCM ministry in Poland: to raise up the next generation of Christians trained in God’s Word and committed to serving in God’s kingdom. John Abramovich sees their summer camp program as a ministry for next-gen Christian leaders as well as an outreach to young people. In fact, many of today’s camp staff came to Christ themselves through hearing the Gospel at camp as children and teens. Pre-camp training sessions, staff devotional teaching times, and mentoring by older leaders minister to young staff even as they in turn minister to campers.

John explains, “Some counselors come from churches where they are not being spiritually fed adequately. They look to camp as a place to learn God’s Word and fellowship with other believers. This year one young counselor shared how camp helped her be assured of her salvation. And even if all do not become camp counselors, we see former campers getting involved in church or para-church ministries. This is very encouraging to us.”

So what lies in the future for this exciting camping program? John Abramovich sums up, “We would like to expand our camp program. We are the only Christian camp in Poland for the mentally handicapped. Older teenagers would like a camp with more Bible teaching and training for ministry. Perhaps we could run a camp exclusively for children from dysfunctional families. Many potential campers also need financial help, especially handi-campers and those from orphanages or government social programs. Expansion requires more resources, so we ask believers to pray and consider what they can do to help us reach more young people for Jesus Christ through our Polish camp ministry.”

If interested in learning more about how you can get involved, contact John and Dasia Abramovich at jdabra@gmail.com