THE CALL TO CAMP MINISTRY CONTINUES! 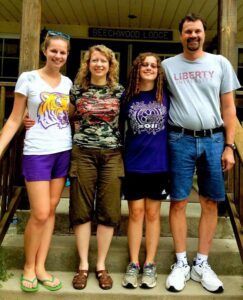 Norman and Dr. Virginia Wray with daughters Veronica and Valerie

I was eleven years old when I attended Camp Sonshine’s first annual weeklong retreat the summer of 1980. A ministry of BCM International, Camp Sonshine was situated that first summer near an active corrections facility with just a lake between us and the guards who raised an American flag over the prison each morning. At that age, I found the shower facility with no privacy as scary as the nearby prison. Did I mention the cabins had canvas sides with no doors or mattresses?  Yes, I was homesick! Each day, my counselor told me I could call my mom—tomorrow!

At that point in my life, I could not have dreamed of one day becoming director of Camp Sonshine. But I haven’t missed a year’s attendance since that first summer. The call to camp ministry from God to me has remained clear all these years.

I grew up in a Christian family, receiving Christ as my Savior when I was nine years old. My first introduction to BCM, then the Bible Club Movement, came in the late 1970s through my grandmother’s best friend Miss Eleanor Manzullo, a BCM missionary who worked with children and teen Bible clubs in South Philadelphia (USA). Miss Eleanor began inviting children for weekend retreats at her country home in Glen Mills, Pennsylvania. Eventually Miss Eleanor shared with friends and supporting churches that God was leading her to start a weeklong camp retreat. These church families provided Camp Sonshine’s first staff, including my own family. My grandfather, Norm Wray, Sr. was head counselor for many years. My grandmother was the music director.

The next summer in 1981, our director Miss Eleanor Manzullo announced that Camp Sonshine would be moving to a different facility out in the country with horses, a safer lake—and private bathing facilities! A year-round camp and retreat center located in central Pennsylvania, Tel Hai rents their facility to churches, and mission boards. Camp Sonshine has now used Tel Hai’s camp facility every summer for thirty-five years. Campers travel from Philadelphia and its suburbs as well as New Jersey, and Delaware.

Fun activities include swimming, boating, shooting bows and air rifles, mini golf, wall climbing, zip lining, boating, and more. And no camper ever forgets the outdoor chapel from which praises sung to the Lord echo all the way up the cook’s quarters on a nearby ridge. The final highlight of each year’s camp is the Friday night talent show, followed by a testimony camp fire.

I myself spent two more years as a camper before becoming a counselor-in-training at age fourteen. Over the next years, I worked my way up to counseling in the teen boys’ cabin where my skills for teaching youth began to develop. I did a lot of growing up in those years under the wings of BCM International, learning life lessons on teamwork and forming friendships which still continue today. 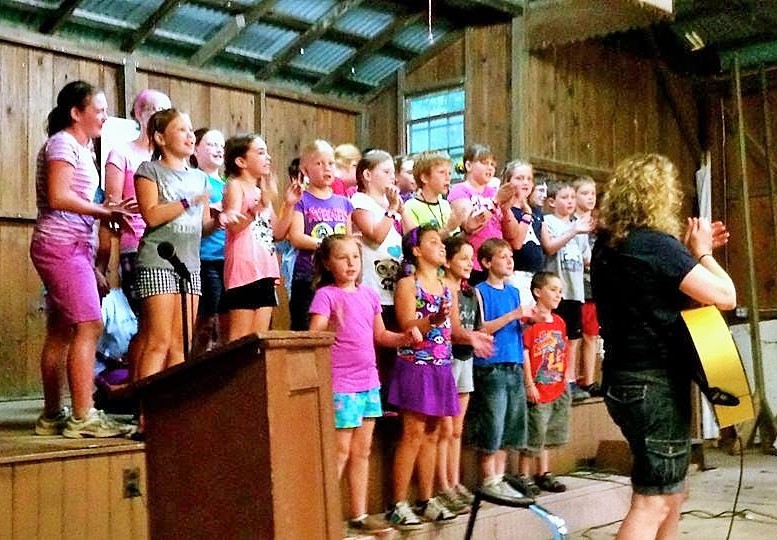 After high school, I began working for a plumbing, heating and air-conditioning company and eventually opened my own business. I married my wife, Dr. Virginia Wray. Together we have two daughters. I became an active lay leader in our church and began working on a degree in psychology and Christian counseling. But every summer found me back at Camp Sonshine. In 2013, I was appointed camp director as well as a BCM associate missionary.

After thirty-six years of camp ministry, I tell our volunteers that we adult staff are the lucky ones to still be attending youth camp because it gets us and our campers away from work, school, and for some, time away from tough neighborhoods and rough family situations. I have seen so many lives, including youth and adults, changed because they came to camp and surrendered their lives to Jesus.

Today many of our staff grew up attending Camp Sonshine every summer, including my own children. Among the campers are grandchildren of the original camp staff. And in my own family, the cycle of generations continues. It is an honor to serve as camp director and Senior Bible teacher at Camp Sonshine. My wife is our music director and Junior Bible teacher. My oldest daughter, Veronica and her husband Brice, my youngest daughter, my cousin Dave and his wife Melodie are among family who have accepted the call to camp ministry. Then there is Bob, Sheri, Robbie, Laura, Dawn, Anna and too many others to list here. But all our staff are volunteers, raising their own costs to serve the Lord at camp. Camp changed their lives, and they return year after year to give back what they received at camp. Seeing young people we’ve discipled now leading children to the Lord is awesome!

This year four campers received Jesus as Savior. The week’s theme was “Our God Is Able!”  Bible lessons focused on the life of King David. Studying David’s life allowed campers to view a man of strong faith who stayed in contact with God, but they also learned of David’s mistakes and how these snowballed when he tried to cover them up. Campers learned about the consequences of sin, and how God truly forgives when we truly repent. 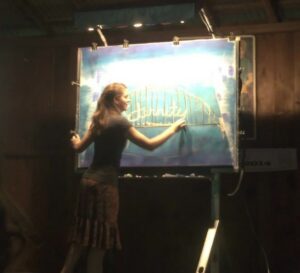 Evening chapel programs included chalk art with a message from a father/daughter team, Bill and Bethany Howell, as well as interactive Bible dramas. Pastor and comedian Gordon Douglas kept campers laughing while delivering a message from God’s Word. One evening a traveling drama ministry, Maranatha Productions, put on a Bible drama with audience volunteers pulling on costumes to help in the reenactment. Not only did campers love participating, but they also remembered the Bible story well afterwards.

A popular nighttime activity was playing Capture the Flag with flashlights. Campers dressed in dark or camouflage clothing, painting their faces dark to stay hidden from roving guards with flashlights. In fact, their preparations took more time than actually locating their flags and bringing them back to home base. Each day ended with evening devotions in the cabins before lights out, a special bonding time between campers and counselors.

This year’s attendance at Camp Sonshine including staff was eighty-three. Over the years, our average attendance has been around a hundred, and we are praying for growth to reach that number again soon. There is no more critical time to get God’s Word to our youth than now!

Feel free to get a closer look at Camp Sonshine by using the internet at https://bcm21697.thankyouforcaring.org/campsonshine where you will find ways to donate and links to contact information. Or go straight to Camping Ministries on BCM’s own website, then click on Camp Sonshine, for more information, including a Facebook group link. For security reasons, please email first to Norman Wray at wwraynorman@gmail.com requesting membership in Sonshine’s Facebook group. You may also check out the camp we rent at www.telhaicamp.org in order to see where all the fun is!