By: Jeanette Windle with Sue Sanderson

When the 2016 Michigan-Seven team touched down in Bolivia’s lowland city of Santa Cruz on June 19th, it was hardly a first visit for team leader Sue Sanderson. Sue has taught BCM Bible clubs and ministered at BCM affiliate camp Pine Ridge Bible Camp (originally Jack and Jill Bible Club Camp) in Cedar Springs, MI, for more than 30 years. She first visited Bolivia in 1990, at which time she taught the first BCM children’s ministry leadership training course there.

That training course developed over the years to what is now a full-fledged BCM ministry in Bolivia with 13 missionaries involved in children’s outreaches, Bible clubs, camps, leadership training, and disaster relief. Sue Sanderson has returned many times over the last 25 years to hold teachers training, biblical counseling, and other courses. 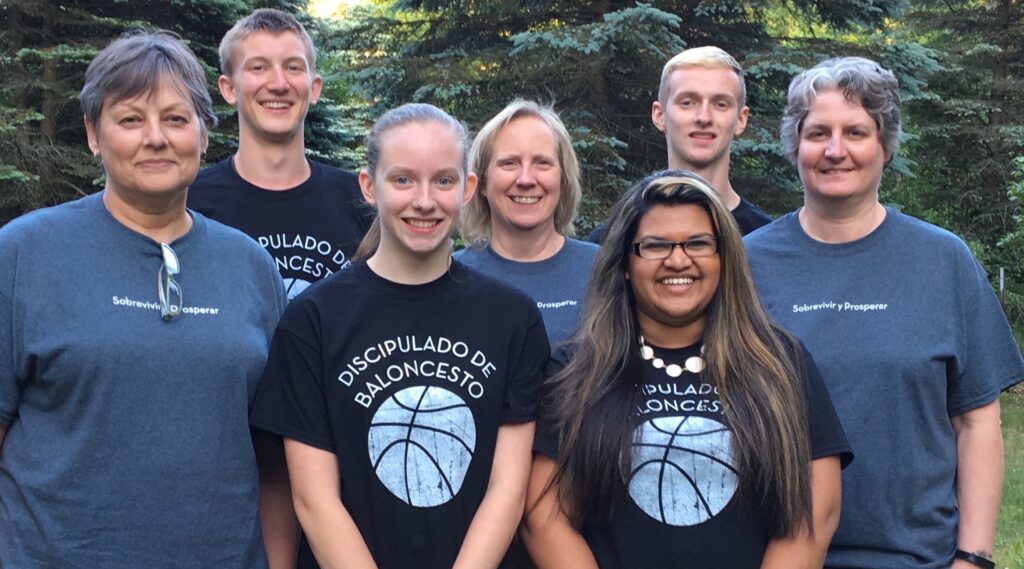 This year’s Michigan-Seven team arrived in Santa Cruz with an exciting new focus. Its seven team members comprised two segments. Four teen members—Lydia Sanderson (17), Jenna Schupp (14), Isaac Couturier (17), Isaac Schupp (18)—made up the Basketball Discipleship team. This talented young team has put together a program using basketball as outreach to children, both at Pine Ridge Bible Camp and in area Michigan churches, incorporating basketball techniques with biblical principles and devotional application. Their mission in Bolivia was to teach youth leadership there how to use the program as an evangelism outreach tool.

Team leader Sue Sanderson with two colleagues, Sheryl Alberta and Cindy Schupp, formed the second half of the team’s focus: “Survive and Thrive”. A ministry birthed from encountering God’s love and sovereign plan in the midst of their own life experiences of traumatic loss and grief, this outreach to other women emphasizes the biblical truth that God does not just want us to survive suffering, but to thrive, grow, find joy in Him, and become equipped through suffering to help and encourage others.

After a 5500-mile journey, the Michigan-Seven team arrived safely in Santa Cruz with fourteen full-sized suitcases loaded with 800 counseling guides, 48 basketballs, and other ministry equipment. An immediate answer to prayer, both team and luggage were waived through Bolivian customs without a hassle—only to discover that back at their original departure point, US customs had confiscated all the team’s ball pumps from their checked luggage! This became just one more opportunity to practice the team’s motto: “Work Hard—Make it Good—Finish Strong.”

Thanks to the pre-planning and oversight of BCM Bolivia missionaries Roger and Cesia Espinoza, who are based in Santa Cruz, the Michigan-Bolivia team hit the ground running. Over the next two weeks they taught twenty-nine total workshops in the Bolivian cities and towns of Santa Cruz, Montero, Mineros, Santa Fe, Chane, Yapacani, and Cochabamba. While in the lowlands, the team was hosted at a local church in Montero. When not teaching, they visited children’s outreaches, taught Bible clubs, spent time with local Christian teens and children, and even learned to make Bolivian delicacies with the church women who were catering the team’s meals. While none of the team members are fluent in Spanish, several bi-lingual Bolivian Christians graciously volunteered their time to translate for workshops and other speaking engagements. 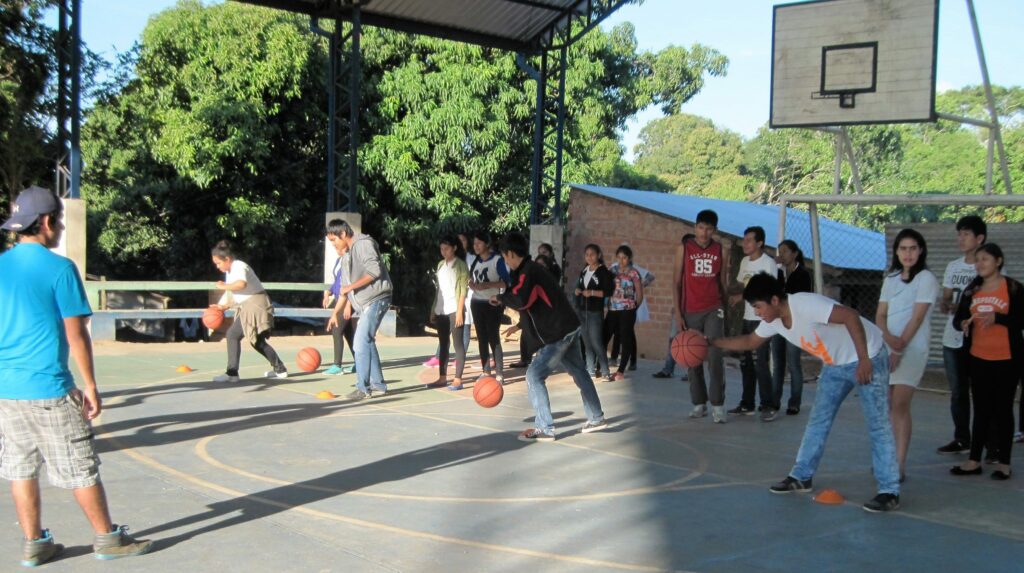 The Basketball Discipleship team repeated their workshop nine times, each one a unique challenge. One afternoon in particular, they were scheduled at a basketball court belonging to a public high school. They arrived to find all 400 high school students waiting for them in the bleachers. The team had to quickly revise their usual discipleship training. Picking out four volunteer scrimmage teams from the students, they ran through their demonstrations and briefly shared the gospel. Their remaining workshops involved actually training Bolivian Christian teens in using basketball techniques with children and how to use the program for discipleship and evangelism by applying analogies of basketball and good sportsmanship to living for Jesus. Each of these new young ministry leaders also received a copy of the Basketball Discipleship ministry’s program manual, translated into Spanish, for use in duplicating the program with their own children’s outreaches.

Sue Sanderson, Sheryl Alberta, and Cindy Schupp taught their “Survive and Thrive” workshop a total of ten times to hundreds of women in different cities. These included Spanish, Quechua, and Guarani ethnic groups. Some audiences were women invited from area churches, but others involved entire local communities of unchurched women, including many young mothers. 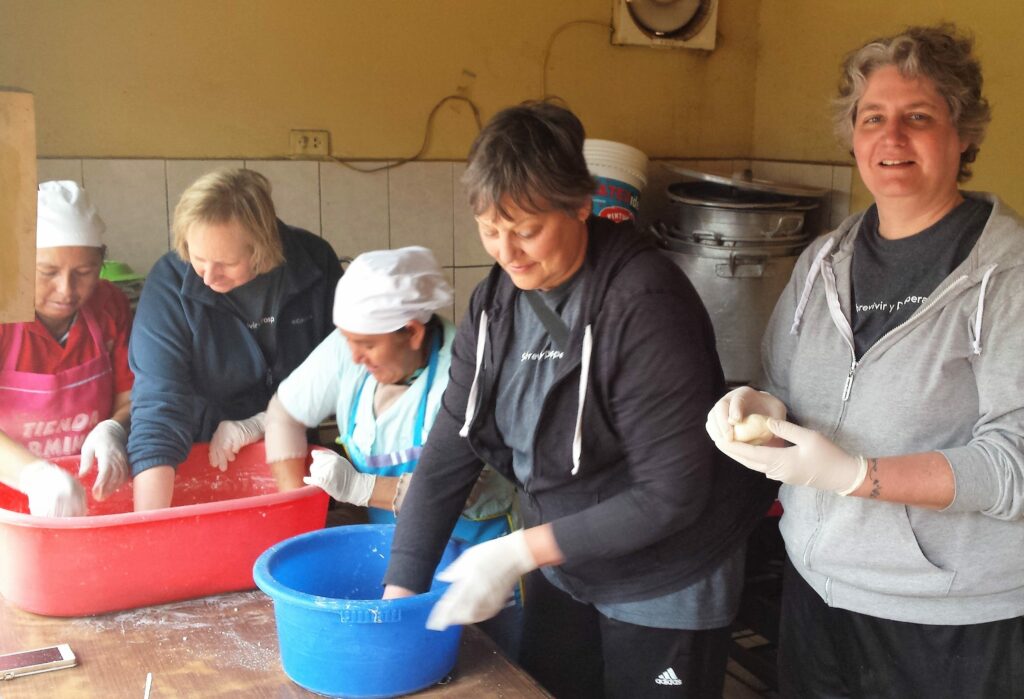 Over and over, the “Survive and Thrive” team encountered open hearts and hurting women hungry to understand better how suffering could possibly be used by God in their lives and spiritual growth. One attending family was struggling with the loss of their father [and for the mother, her husband] to an influenza virus two weeks earlier. Team members who had also lost father and husband were able to minister personally to their grief. In another city, a presentation of John 3:16 and its message resulted in a dozen decisions to receive salvation.

The Michigan-Seven’s first two weeks were spent in the Bolivian lowlands, a terrain that is largely flat scrub jungle, farmlands, and cattle ranches where cities have not pushed back tropical rainforests. Their last weekend was spent in Cochabamba, regional capital of Bolivia’s dry, arid Andean highlands, with BCM Latin America director Daniel Ortiz, wife Sarvia, and family, including daughter and son-in-law Saul and Gladys Eschalar, newly appointed BCM missionaries. The team also presented their workshops one more time.

If the height of summer back in their home state, one thing the Michigan-Seven didn’t encounter during their stay was tropical heat. Since Bolivia lies south of the equator, June is its coldest, wettest season of year, made even colder by a lack of any heating in most buildings. But the constant chill and damp, long trips on bumpy dirt roads, or arduous days of teaching and sharing were not the memories the Michigan-Seven took home seventeen days after their brief “immigration” to Bolivia. 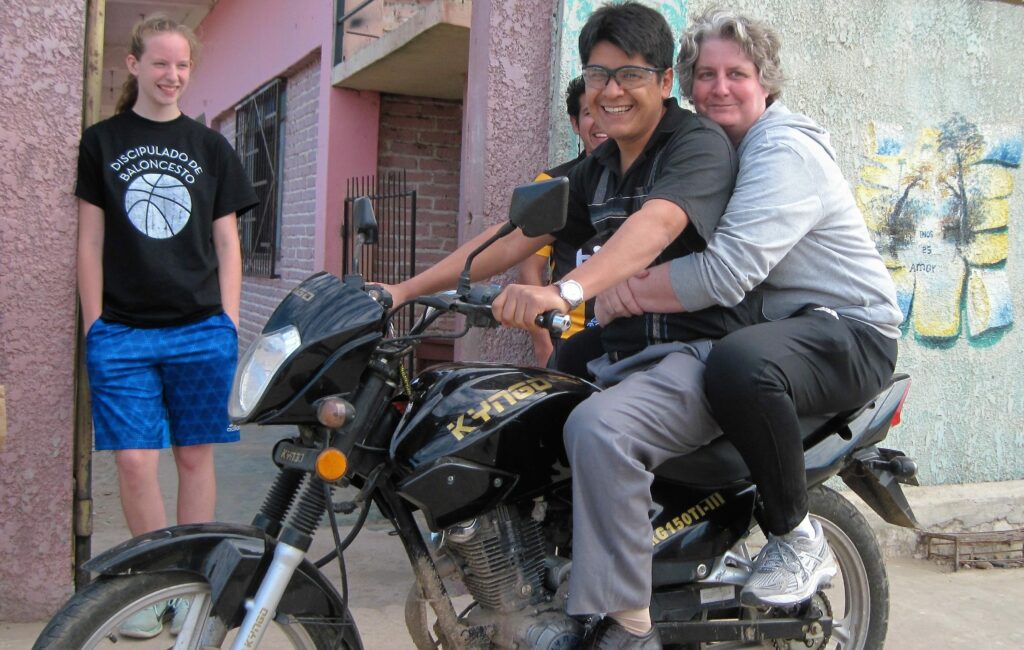 Plans are already underway for the next Bolivia missions trip. Team leader Sue Sanders sums up why they are eager to return: “Though unique in so many ways, one thing Bolivia has in common with every other nation in this world is that its children love to learn, and they love to be loved. This world will always have children to teach and to love. For the Christ-follower who has been called to assist in children’s ministries [or women’s ministries as well], Bolivia is an unending opportunity for investment and growth.”

If you are interested in learning more about Basketball Discipleship outreach, Survive and Thrive ministries, or service opportunities with BCM Bolivia, contact Sue Sanderson at susan.richie@yahoo.com