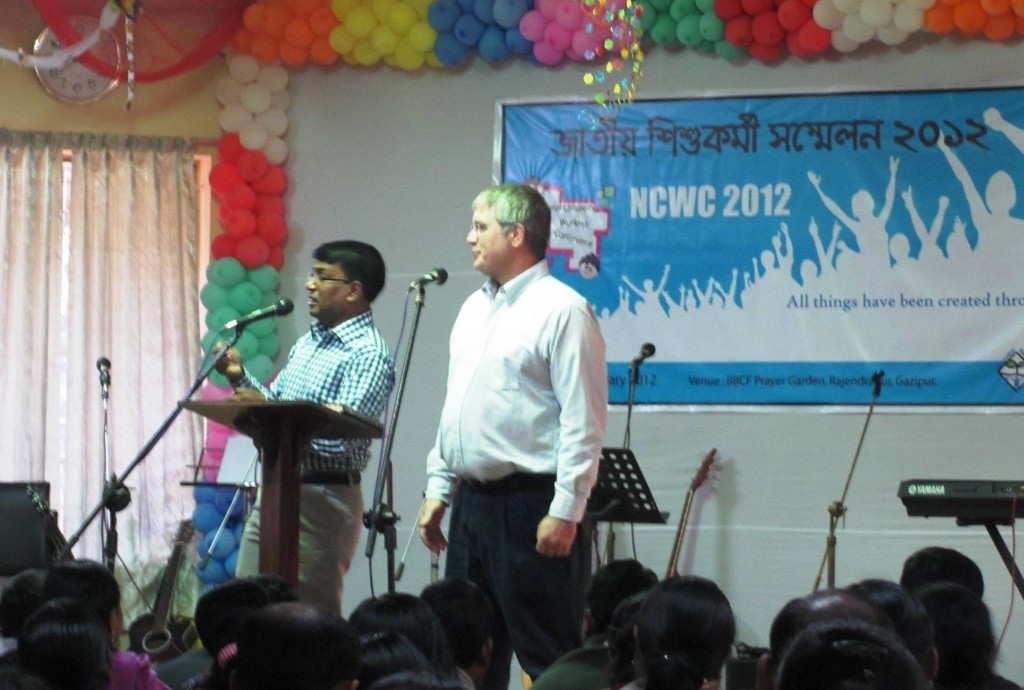 Bangladesh (BCM World) — Ask BCM missionary Stan Tyson how he got involved with Bangladesh. His answer: “I just said ‘yes’ when God opened the door!”

In early 2012, Stan Tyson and his wife Mary Ann had flown from their home base in Pennsylvania, USA, to Bangladesh, to visit a daughter who works in that small Asian country. Beyond a family vacation, their only agenda was to hand-ferry back to the USA a copy of In Step with the Master Teacher, BCM’s children’s ministry leadership training curriculum, newly translated in Bengali. Little did Stan know God had something much larger in mind!

Bangladesh lies just to the east of India bordering on the Bay of Bengal. It has been said that to understand the country, one should picture the US state of Nebraska, but filled with half of United States’ entire population. Then flood one-third of that state for part of the year to visualize the Bangladeshi wet season. Add widespread poverty, low life expectancy, political and bureaucratic corruption, a high illiteracy rate, and an oppressed Christian minority for a picture of modern-day Bangladesh.

Among Stan’s memories arriving in Dhaka, capital of Bangladesh, is the noise of millions of car horns. One of the world’s most densely populated cities with 15 million residents, Dhaka is known as the Rickshaw Capital of the World for its 400,000+ rickshaws (a cart on wheels pulled by a man) darting in and out of traffic. Mingling five times a day with street noises is the Muslim call to prayer.

Islam is the country’s official religion with 90% of Bangladeshis identified as Muslim. Of the remaining 10%, most are Hindu with a tiny minority of .7% identifying themselves as Christians. Though permitted by law to worship publicly, Christians are routinely denied certain rights such as access to public wells or freedom of speech to share their faith. Despite oppression, the Christian community in Bangladesh has experienced steady growth.

Stan was to pick up the ISMT translation from a man who goes simply by the name Gideon. In such a densely populated city, it was a pleasant surprise to discover that the building where Gideon both lived and had his office was located just seven blocks from where the Tysons were staying. There over a traditional Bangladesh tea and refreshments, Stan met Gideon and his team for the first time. 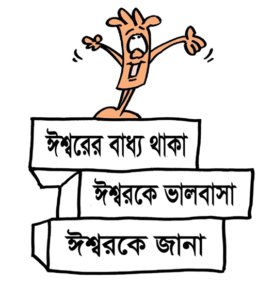 “We each shared our part in the story of how God orchestrated the translation of ISMT into Bengali,” Stan remembers. “It was amazing how God brought together two people from opposite sides of the world.”

Gideon shared his own vision to reach Bangladeshi children with the Gospel of Christ. A full one-third of his country’s population is under the age of fifteen. But the focus of Christian ministry has been traditionally on adults. Many Bangladeshi pastors have not even seen a need for children’s ministry. Gideon had earlier met BCM International’s Children’s Ministry Director, Esther Zimmerman, at a global children’s ministry conference.

“We shared a passion for reaching and discipling the world’s 2.2 billion children and for envisioning and equipping leaders,” says Zimmerman. “Gideon and his team had already been involved in children’s ministry training on a national scale, but recognized the systematic and comprehensive value of In Step with the Master Teacher material.”

A program that covers twenty-two hours of children’s ministry leadership training, ISMT focuses four core sessions on teacher, students, Bible lesson, and program respectively with eighteen additional satellite sessions. Already translated into almost two dozen languages, it was not yet available in Bengali. Gideon requested to be able to take ISMT back to Bangladesh and have it translated. 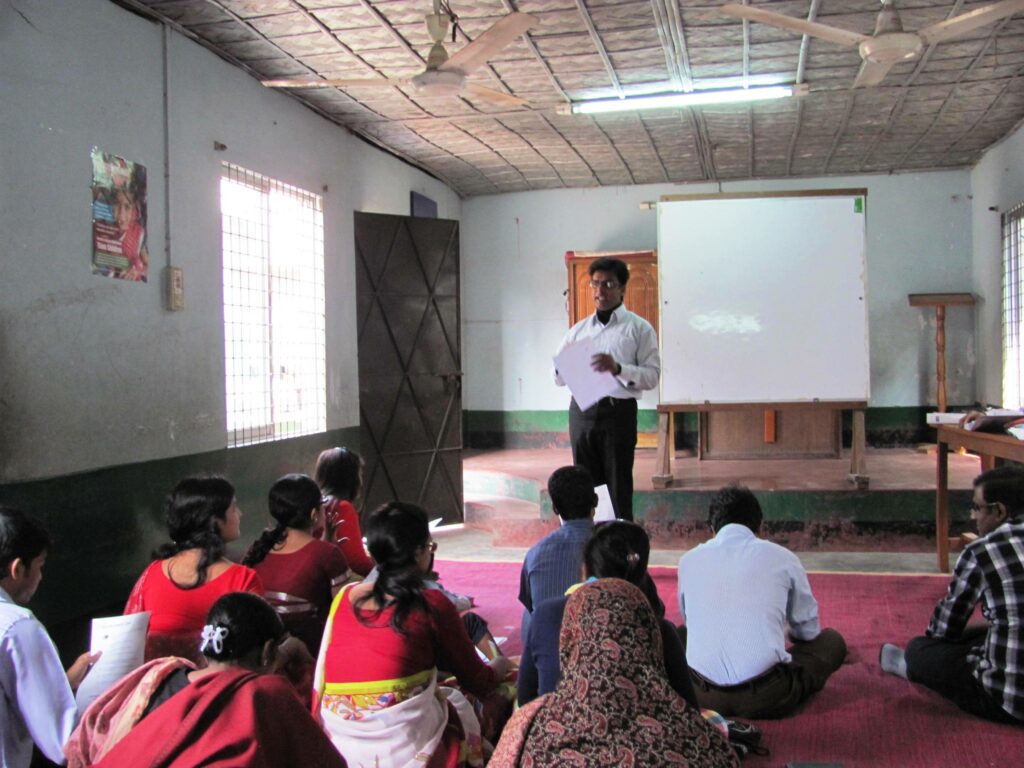 That same year of 2010 was also the year Stan Tyson became a BCM missionary, his principal role to work with the ISMT training ministry across the United States. With a daughter working in Bangladesh, he’d been interested to hear of ISMT being translated into that country’s principal language, even more so to meet Gideon and hear of his plans for using ISMT. The only foreseeable problem with the translation: someone was needed to teach how to use it.

BCM’s core strategy for ISMT has always been that of multiplication. Which means not just training children’s ministry leaders, but training regional trainers to train their own leaders. This is typically done through a three-day conference called Train the Trainer. In November of 2012, just a few months after their first visit, Stan along with Mary Ann returned to hold the first Train the Trainer (TTT) event in Bangladesh. They were joined by Barb Van Vaulkenburg, a BCM England missionary with TTT experience. With the help of translators, Stan and Barb taught seventeen Bangladeshi candidates how to use this innovative program.

The next step before Tysons headed home was for the new Master Trainers to set up their own ISMT conference. While Stan would be on hand to give direction where needed, the Bangladeshis would do the training. The new trainers set up two ISMT workshops over the next few days. For Stan it was exhilarating to see the multiplication process in full display. Not only were these new trainers well-equipped, they spoke the Bengali language and knew the culture. 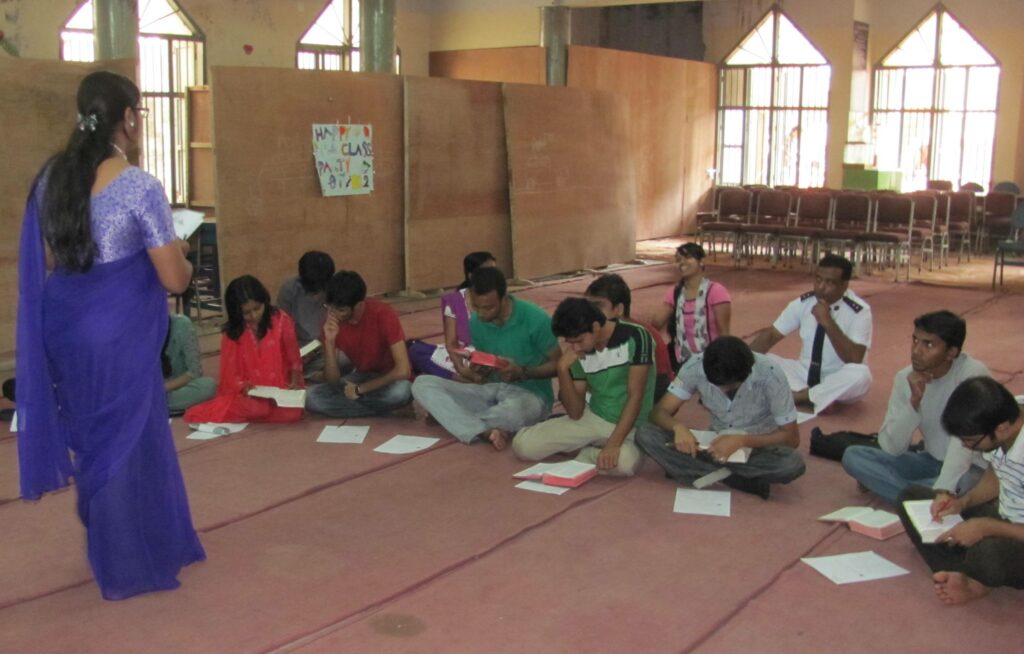 “They were better teachers in that setting than Barb or I ever could be,” Stan enthusiastically reports. “They had already doubled the number of people with some level of ISMT training before I left the country.”

Since then in just thirteen months, the new Bangladeshi Master Trainers have already trained about five hundred people in the ISMT program. But the vision for BCM ministry in Bangladesh hasn’t stopped there. Every two years the Christian community in Bangladesh holds a national conference with about four hundred children’s workers from a variety of denominations attending. During his 2012 visit, Stan Tyson had opportunity to share a devotional at that conference. The next conference is scheduled for late 2014 and Stan has now been invited back to be the key note speaker, using ISMT material.

This offers both an opportunity and a challenge. With average daily wages in Bangladesh just a few US dollars, the $15US conference fee can be as much as a week’s wages. One of Stan’s goals is to not only raise his own funds for the trip, but to sponsor children’s ministry leaders who might not otherwise be able to attend.