A Monument of Praise: God Is Not Finished With BCM Italy 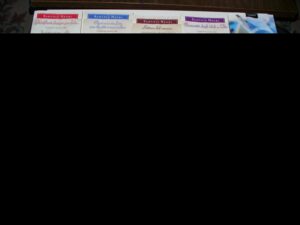 Had the time come to shut down BCM ministry in Italy? After a half-century of ministry, founders and directors of BCM Italy Jim and Fran Lines were well past retirement age, and no new fulltime BCM missionaries were available to take their place. At greatest stake were Camp Maranatha and BCM Italy’s publishing house, which produced Italian-language versions of Footsteps of Faith and other core BCM curriculum and teaching resources. Without new leadership, both camp and publishing house would be forced to close once the Lines left Italy for retirement.

But Jim and Fran Lines had seen God work miracles before (see BCM World Article “Compelled By Love”, beginning with Camp Maranatha itself. Establishing a Christian camp where children, teens and families could come to know Jesus Christ and grow in Him had been a top priority for the Lines since they’d arrived in Italy in 1963. But with sixty million people in a country the size of California, property for a camp was prohibitively scarce and expensive.

Then God’s miracle began to unfold. An Italian-American who owned forty acres in Utah deeded the property for BCM Italy’s camp project. Other Christians in Italy and North America began to donate as well. By 1979, the camp fund held more than $15,000USD. Still, every likely property Lines had investigated had an asking price at least ten times that much. Then Jim and Fran heard about an old farmstead up in the mountains an hour’s drive west of Rimini, the coastal city in north-central Italy where the Lines lived. The century-old stone farmhouse had not been used in ten years, but there was water, electricity and ten acres of land. Best of all, the asking cost was only $35,000. 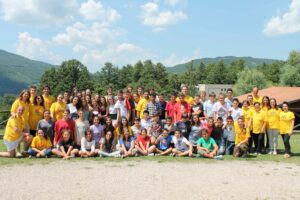 BCM Italy signed the deed in November, 1979. When payment was due, somehow the money was always there. Fran Lines shares, “The story of how the Lord built Camp Maranatha (which translates as “the Lord comes!”) is too long to relate here, but it is a story of miracles. Many times we were discouraged—like the time the whole center of the farmhouse caved in due to earthquake tremors throughout the Apennine Mountain chain. But the Lord always came through!”

Camp Maranatha obtained its operating license in 1993, though camps were held even during the building years. The camps began yielding a rich harvest as many came to know Christ as Savior and Lord. Maranatha became a center of evangelism and discipleship in a totally unevangelized area of Italy, the closest evangelical church nearly an hour’s drive away.

In 2002, Jim and Fran turned directorship of Camp Maranatha over to BCM Italy missionaries Michael and Lorna Ralston from Canada. For the next decade, the Lines focused on the literature ministry, adding the Italian translation of BCM’s children’s leadership training program In Step with the Master Teacher and a series of small, practical Bible commentaries to BCM Italy’s publications catalog. They also taught Bible and leadership classes as well as the ISMT teacher training course in churches throughout Italy.

But after 50 years of ministry in Italy, Jim and Fran would soon be relocating to their native USA. The Ralstons had moved on to a different ministry. A Camp Committee offered oversight for Maranatha, and the Italian churches had provided many excellent volunteers over the years. But there was no fulltime personnel to take over either the camp or publishing house. The Lines gathered together with Italian Christian leadership to seek God’s leading for the future. Was God finished with Camp Maranatha?  If not, who would carry on? 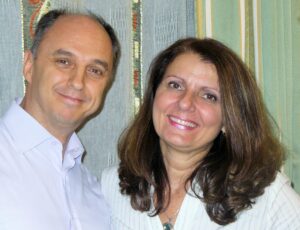 As the group sought God’s leading, Jim and Fran Lines began to see a fresh miracle unfold. Among Italian Christians with whom the Lines had shared this need was a church lay leader named Enrico Pasquini and his wife Betty. The Pasquinis had attended family camps at Maranatha. Their children had grown up attending youth camps there. Betty had been a camp volunteer many times over the years. Enrico shared with Jim that God had been speaking to him for some time about leaving his secular career to work fulltime in ministry. He was especially interested in camp ministry, where he could be involved in training and equipping adults and children to serve Christ more effectively.

At that time, Enrico was working in an executive position as a supervisor for over 700 employees. His wife Betty had also worked for a secular company and was especially gifted in administration. In 2012, Enrico and Betty were offered the opportunity to direct that summer’s family camps. By summer’s end, their capable directorship, love for the campers, and concern for their charges’ spiritual welfare made clear to the Camp Committee that God had uniquely prepared this couple for the position of camp directors. Though Enrico and Betty were not the only candidates, the decision to call the Pasquinis was a unanimous one.

For the Pasquinis, accepting that invitation was a step of faith, since the new position required leaving a steady paycheck with no guarantee of financial backing. But in November, 2012, Enrico and Betty informed the committee they were willing to accept the challenge.

Nor was this the only answer to prayer. As Enrico learned more about BCM Italy, he shared with the Lines his concerns that the publications ministry continue. Since discipleship was a main focus of their ministry, good books and other publications would be necessary. Other Camp Committee members also expressed their concern that this ministry continue. A new committee was formed to take over BCM Italy publications. 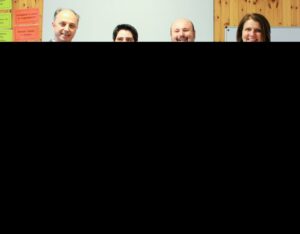 As camp directors, Enrico and Betty also became acquainted with BCM Italy’s In Step with the Master Teacher (ISMT) children’s ministry training program. They immediately caught the vision of equipping gifted local teachers to in turn become trainers and help equip others. Here was a means of multiplying their own objective of discipling both children and adults. Enrico and Betty, along with another Camp Committee member gifted in teaching, began preparing to become lead trainers for the course. These three now head up ISMT training in Italy, holding seminars across the country to raise up effective Sunday School teachers and children’s ministry leaders for the local church.

Now relocated to the USA, Jim and Fran rejoice to see the ministry of BCM Italy begun more than fifty years ago moving forward under a new generation of Italian Christian leadership. Today Camp Maranatha is functioning at full capacity. Summer camps are filled to overflowing, and other camps, conferences, and church events are hosted year-round. Both ISMT training and publications continue to expand with three new releases already scheduled for publication over the next two years.

In February, 2015, Enrico and Betty Pasquini attended BCM Europe’s candidate school in Puten, Netherlands, where they were appointed as full-time BCM ministry personnel. They still have limited financial support, but are trusting fully in their all-powerful Father to provide all that they need. Please pray for the Pasquinis that God will supply needed financial support for their family as well as Camp Maranatha and other BCM Italy ministries.

Jim and Fran Lines summarize: “This brief article can in no way exhaust the wonder-working of God in the establishment of His work through BCM International in Italy. Our objective is simply to erect a monument of praise to Him, who is responsible for it all.”