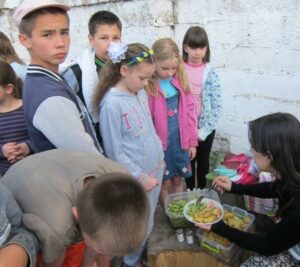 Dysfunctional families are a common problem in Ukraine, which can result in children and teens growing up on the streets. BCM’s desire is that no child be forgotten or left behind. Keeping this in mind, BCM missionaries Vitali and Valja Lechs began a youth center in the city of Zhytomyr, located in the north of western Ukraine. They began by simply inviting children to come. About thirty now attend regularly.

“We teach them the Bible, play with them, do sports. We also feed them lunch because these children don’t have three meals a day,” explains Vitali.

The youth center is not just limited to children, but also reaches out to teens who are at risk. The youth center started about three years ago, so the original children who attended have grown into teenagers—hence the need of a teen ministry as well. Vitali shares: “I rent a sports hall for teenagers to play basketball. Several times a year we have competitions. At the last tournament, we had about 70 teenagers, 90% of whom were not believers. Teens love sports, so we have put together a sports ground next to the day center so they can come and do sports as well as other activities. The day center is open during the school year. Over the summer months, we run camps for them.”

Along with the sports, they teach a Bible club for teenagers. Currently, twenty teens attend. They are seeing tangible fruit from this ministry as multiple teens have to be baptized. Already fifteen teens who grew up in the youth center now help minister to other children.

Vitali explains their vision: “My city is very large. It is our desire to start a second center in another area of the city. We already have a team of people interested in getting involved—teenagers saved at day camp and other co-workers.”

Pray for the youth centers in Ukraine to be able to multiply- soon!