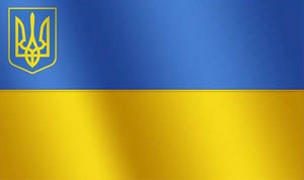 While BCM ministry in the Eastern European country of Ukraine has existed since 1993, political circumstances have recently changed, re-shaping ministries to meet needs of the Ukrainian people in their present circumstances. Because of ongoing conflict with Russia, some ministries such as the Mariupol orphanage have required temporary relocation. Also due to the conflict, outreach to soldiers and refugees has become a priority. Ukrainian youth continue in need of guidance, discipleship, and mentoring, which has opened doors for youth centers and additional camps and Bible clubs. Church plants are blossoming, and new opportunities arise regularly for BCM Ukraine’s fifteen full-time missionaries to reach their compatriots. Read on to catch a glimpse of what God is doing in and through BCM Ukraine.

Below you will find links to the different ministries that BCM Ukraine is involved in. Click on the ministry to learn more.
[hr] 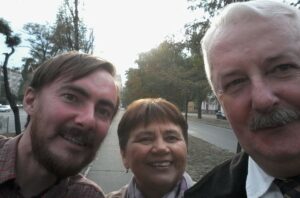 Director of BCM Ukraine Dr. Igor Kotenko came to know Christ as Savior in the early 1990s after spending half a week’s salary on a Bible. Read more of Igor and Oxana’s testimony in Changing Ukraine, One Heart at Time – published in BCM World spring 2009.

Igor’s love for God and concern for his fellow Ukrainians initiated the various ministries of BCM Ukraine in 1993. Outreaches through Bible clubs, camps, and universities have now multiplied and spread across borders into Russia. Igor is also one of five pastors who oversee the church the Kotenkos attend in Ukraine’s capital city of Kiev, which has an attendance of about… Continue reading here
[hr] 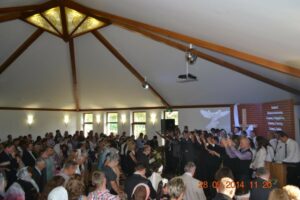 Mukachevo, a city located on the far western side of Ukraine near the borders of Slovakia, Hungary, and Romania, is the location of a new BCM church plant pastored by BCM missionary Rev. Timothy Dymchenko. The church property was purchased in 2008. Rev. Dymchenko remembers standing with Bob Evans, president-emeritus of BCM, near a tree on the empty lot and asking Bob to pray that God would provide means to build a church there. God answered prayer, and that tree has now been dubbed the “Bob Evans tree”.

Unable to Unable to hire outside help for the build, the Ukrainian church members built the church with their own hands. In 2010 when volunteers cleared the … Continue reading here
[hr] 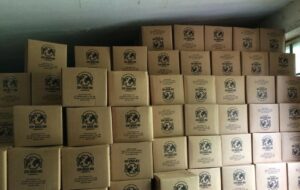 The crisis in eastern Ukraine has created many refugees, opening new doors for ministry. The Mukachevo church plant cares for more than forty refugees by providing food and helping them find jobs. These include families with children who are poor, hungry, homeless, and victims of war. One example is a family from the war zone. The father was riding his bike home one day and was almost there when his pants leg got caught in the bike chain. He had gotten off his bike to free himself when three missiles hit his home. If he hadn’t stopped, he would likely have been killed. As it was, the house was badly damaged, and his mother —thankfully, a Christian with great faith in God—was killed. As winter set in, the damage … Continue reading here 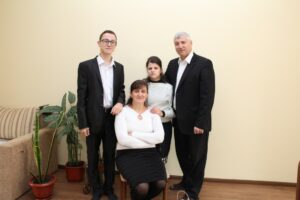 BCM missionary Alex Tomnitsky is a veteran of the Afghan war who came to Christ in 1996. He shares: “As the war with Russia started, not only was the army not ready, but neither was the church. Nobody here had any practical experience running a chaplaincy ministry. But the Ukrainian churches took on the challenge, sending out church members who would be able to fill in this gap in evangelism to servicemen. This is how I stepped into this service.”

Since Alex is a war veteran himself, he understands the traumas of war. He has also studied Christian counseling, so he is able to counsel fellow soldiers. He explains… Continue reading here 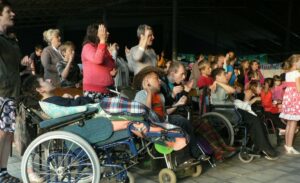 BCM Ukraine offers a variety of camps in different locations and different time frames (day camp or full-week). Camps for teens and children take place throughout the summer months, including among war victims and orphans. An exciting additional ministry outreach is camps for handicapped children, for whom programs and resources are very rare in the Ukraine. BCM missionaries Alexander and Sveta Tomnytsky, who have handicapped children themselves, help run these programs from their home base in Zhytomir. They are joined by BCM team members Corosten Anton and Katia Rozvodovsky. These “handicamps” are… Continue reading here 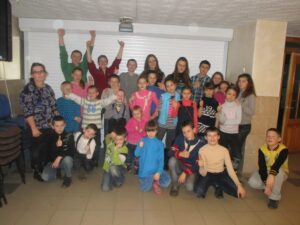 Dysfunctional families are a common problem in Ukraine, which can result in children and teens growing up on the streets. BCM’s desire is that no child be forgotten or left behind. Keeping this in mind, BCM missionaries Vitali and Valja Lechs began a youth center in the city of Zhytomyr, located in the north of western Ukraine. They began by simply inviting children to come. About thirty now attend regularly.

“We teach them the Bible, play with them, do sports. We also feed them lunch because these children don’t have three meals a day,” explains Vitali.

The youth center is not just limited to children, but also… Continue reading here 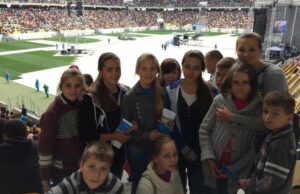 In 2000 BCM missionary Tima Anokhin helped found a ministry to homeless children on the streets of the small village of Velikopolovecke. Volunteers would find homeless children, bring them into the ministry center, and give them food and showers. This grew into a full children’s home that consists mostly of “social orphans”—children who have parents, but who for a variety of reasons have been abandoned. Tima explains that the goal for these children is to “help them grow spiritually and physically and also to help them to fit in socially when they graduate from school.”

Another orphanage is located in Mariupol, in the… Continue reading here
[hr]